Edited and packaged by Meg Tohill

Jack Murphy offers a snapshot of what it was like to be an artist in New Paltz during the “Golden Age,” his inspiration behind curating the exhibition.

During the 1960s, Jack Murphy was immersed in the local art scene at New Paltz. Murphy was an art student at SUNY New Paltz who ended up realizing the collective talent of his fellow alumni by curating a three-part art exhibition, celebrating the works that came out of New Paltz during its “golden age.” On the morning before the opening reception of the show over some coffee on Main Street, Murphy gave us a sense of the spirit of the times.

How would you describe the Golden Age of New Paltz?

In the early ’60s, there was an unusually high number of talented artists who came to New Paltz. They all socialized and became friends. They set a trend for quality work. Quite a few of them became very successful. That inspired people who came after them in the mid ’60s and the late ’60s. A lot of them were still around, so you got to know these people and you benefited from their experiences. That whole idea of the ’60s, be yourself, express yourself, was part of it. There was growing student involvement. Students made a push for the college to offer a fine arts degree. Non-students and non-professors were also very active in the arts.  All that is what made that decade really important for the arts here in New Paltz. Things were picking up and getting very active because people were interested.

What’s the art scene like today in New Paltz? What’s changed since the ’60s?

Now there’s the fine arts degree. People come to New Paltz not to become art teachers but to become artists. The Dorky Museum didn’t exist. There was an art gallery called the Smiley Art Gallery which is about half the size of the gallery at the Dorsky. There was a limited number of shows, not a lot of student input. There are more galleries now, so the students have more places to show. There are more art publications now that feature local artists. In the ’60s we had two underground newspapers and that was about it for outlets for students. There’s more opportunities; I think that’s kept the art scene very vibrant. You can get your work out there much easier now than you could back then.

What do you miss the most about the Golden Age of New Paltz?

At that time I was a student so I was part of it. It was a growing experience. There were a lot of musicians, writers, poets and a lot of things going on. There was a lot of interaction. Nowadays my colleagues and I are more spread out because we have different responsibilities. I miss the social scene that existed, the camaraderie. Everyone’s art was new so everyone was really into it.  Trying to get in shows and to get work published was fun.

How do you think artists and their works benefit their communities?

Art can be a very powerful medium for social change and social messages. In the ’60s, we had the civil rights movement, women’s equality movement, and the anti-war movement. New Paltz is and was a very active liberal, political community. The arts continue to play a big role in that. During the ’60s, the art students were constantly making posters and banners whenever there was a protest march. That obviously still goes on.  Art is a way to get a message out to the public.

Why do you create art?

I was always interested in photography as a kid but couldn’t afford a camera or to pay to develop film or make prints. When I started taking courses at the college a lot of this pent up desire to do photography started to come out. Having a show encourages me to do some new body of work, to finish it, frame it, hang it on a wall and hear what people have to say.

What do you hope people gain from this exhibition?

I hope that they see the variety of the work, the quality of the work, and get an idea of what was going on then and now with these same artists. This third and final show we have had approximately 100 artists with 240 pieces of work. I think it’s a good overview of the artists and the work that they produced and are still producing. People can get a sense of these people and that time.

Why did you take on the task of helping to curate this show?

My friend Margie Simon was attempting to do this. She was a member of the class of ’63. She was close friends with a lot of the artists of that time period. She felt that because 50 years had gone by, it was a good time to do an overview of the work and to get the artists back together. She had cancer so I offered to help her and unfortunately she died in 2016. I told Margie that if anything happened to her I would try to finish the show for her.

Do you have any advice for someone who wants to curate a show?

You have to be an organized person to do this. You have to collect a lot of information; biographies, resumes, artists’ statements. You have to narrow it down to pieces that fit in the show cohesively. You should like the artwork and the artists. You need some sort of vision for what you’re doing, the point of the show. You have to like to do it and want to do it. Be ready to put in a lot of time and be prepared for unknowns. 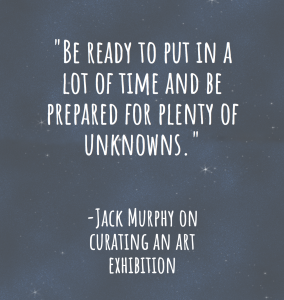 See what Murphy had to say at the closing reception, here.

Mon Dec 17 , 2018
The creation of printed plastic handguns has once again turned the spotlight on gun control. It is simply not allowed in SUNY New Paltz 3D printing lab, the manager says. 3D printing lab supervisor Aaron Nelson said the lab will strictly filter out printing requests that contain any weapon components […] 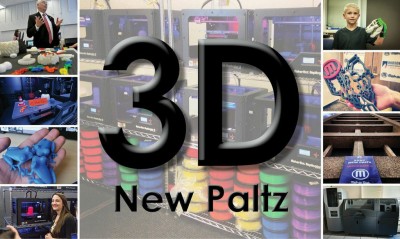