Written by Bridget Peschel
Edited and packaged by Alicia McGowan

Artist and SUNY New Paltz alumna, Rosalie Rossi has taught art to students in preschool to college level. She believes every student she teaches should do a self portrait.

The large, metallic “21” on Rosalie Rossi’s apartment door is surrounded by signs and stickers. Inside, every wall is covered in art. Some is her own and some is not. Some is framed, some is not. Dressed in all white with vivid pink tips in her curly grey-white hair, she circles the room telling stories about the artists behind several of the works. Occasionally she steps over her pacing 16-year-old miniature poodle Manaki, which translates to “manifestation.”

She still has many pieces from her time at SUNY New Paltz, and she speaks fondly of them and their creators. Her piece that will be shown at the “Golden Age of New Paltz” exhibition sits in the corner of the room. It is a multimedia construction, with painted words over a print of Thomas Gainsborough’s famous Blue Boy oil painting, and a curated stack of books. One of them is by Gore Vidal, her favorite author. 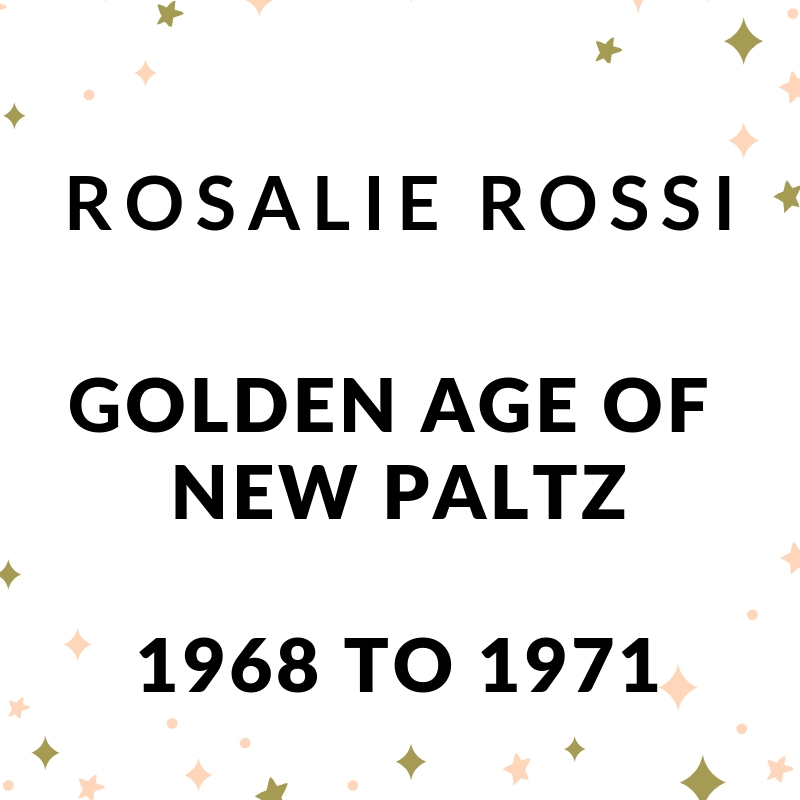 I was interested in art all my life. That was how I amused myself. I would do coloring books and drawings of flowers and things. I took art from elementary school to high school. When I went to college, I majored in English literature and French. I love literature, and I’m a big Yeats fan. Eventually I decided I liked doing art more than the academic classes, so I went to Cooper Union on a very competitive scholarship. Then I transferred to SUNY New Paltz because I could coalesce the academics and the art. I kept on taking literature classes, but my major at New Paltz was art and aesthetics education.

Did your family encourage your passion for art?

Yes. They had no background, but they’re Italian, so they have it in their blood that they like art and music. They encouraged me to do whatever I wanted to do.

Do you think there was something unique about New Paltz that added to your work and your career?

I had very good teachers and a lot of encouragement. I had a first-rate art history professor called Hugo Munsterberg. He used to invite us to his home, where he had an art collection, and he’d give us tea. At one point, he took me over to his collection and said, “Rosalie, choose anything you want.” He was enormously generous, and he encouraged me to be a collector as well as an artist. I later became friends with him. What I think was unique about those opportunities was that I really got to know some excellent people including my fellow students and my teachers at different levels. I learned how to teach by observing my professors.

I taught art  at different times in my life. I never taught long enough to get tenure, so I never made a lot of money at it. I’ve taught all different ages—from preschool to adult night classes. I went back and got my doctorate and started teaching college level. I believe every student should have the experience of doing a self-portrait, even though it’s one of the hardest things to do. The students that wanted to pursue art, I would make them do five [pieces] in different media. I would really make it difficult for the art students, but I would encourage them. I never beat them up. I always found the best in them, and then I would just tweak and encourage.

What is your favorite medium?

I think I like to paint more than anything else—except maybe sculpture. I like to carve. I do other media too. Currently I’m doing some constructions. I put different things together. I really like participation pieces where anyone can paint and add something to the piece. I really like to encourage other people to express themselves. That’s the teacher in me.

Have you always lived locally?

I’ve traveled around a lot, but I was born in Newburgh and raised in Highland Falls, where I lived until I went to college. When I first started at New Paltz, I lived on Butterville Road with a view of the mountains. I had a standard poodle. Sometimes she would get loose and she’d come find me in the bars—you know as New Paltz students you all go out to the bars—she’d walk three miles into town and find me wherever I was.

Did the social/political climate at the time affect you?

I was an activist. I marched against Vietnam, and I was always in the front. I went right up to the steps of the Pentagon. I had a bayonet against my chest! But I didn’t expect anybody to stick me, so I could afford to do that. But then they killed students at Kent State. I also marched for the NAACP. I believe we’re all the same and you should respect everyone. I sign everything I write with “Love and respect.” I take the time to do it because it’s important to me. If you love and respect everyone, life is a lot easier. 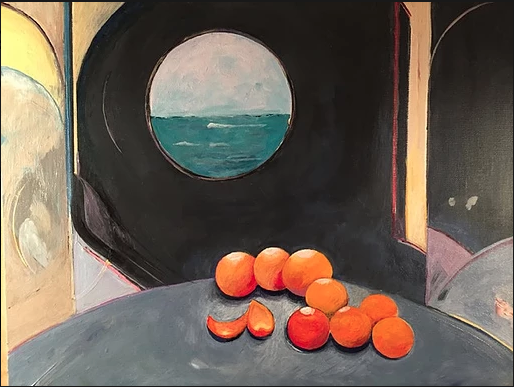