Edited and packaged by Bridget McGuigan

Robert Crimi sits down to talk about his love for jazz music, the techiniques his uncle taught him and what brought him to New Paltz during the 1970s.

Visiting the studio of artist Robert Crimi, you’ll be greeted by a man with a head of messy grey hair and a set of kind, brown eyes. He’ll invite you in, offer you a drink of water, and then usher you upstairs to where he works. There, you’ll be taken aback at the sight. There’s a palette filled with brushes, all a uniform pale blue, heavily stained from years of careful use. On the wall, you’ll find a gorgeous mix of color that you could swear looks like a river or a tree, yet it isn’t. He’ll sit you down, and he’ll tell you about his life in the city, his love of jazz and how it affects his work, and leave inspired by a man who loves his craft so much. 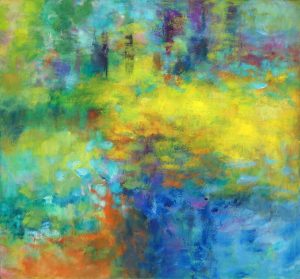 How did your youth inspire you to become an artist?

I was born in the Bronx. My father’s family is from a little town in Sicily and they came here in the early 1900s because of the poverty in Europe and such. And my mother’s family was from Bari which is on the Adriatic, but they met here, my father was born there. He and his brother seemed to have an artistic bent. When I was born, they were both doing murals for hospitals and post offices. When I was 18, I decided to study with my uncle in Greenwich Village. I started going down there to the Half Note and the Five Spot and Birdland and the Apollo and I was filling myself with the sounds of jazz. Those musicians, Monk, Coltrane, Mingus, were pretty remarkable because they were exploring so much and they were revolutionaries and it defined that whole period of New York.

Your uncle, Alfred Crimi, was a well-known muralist and you were his apprentice for a time. What did that entail?

I started with charcoal drawings, and then I moved to canvas. I used to help him with some of the large cartoons for murals. He taught me how to do framing, how to guild frames. He taught me how to do temper paintings, how to make temper paints from an egg yolk. Temper paintings before oil paintings are the way artists expressed themselves, usually on wood. You would see panels, most likely for the church. I would learn from his endeavors.He studied in Rome and he studied all these methods and he was a creative guy. And when I was with him in the 1950s, he was making murals that dealt with the ideas of compositional balance and color relationships. So he would work on paintings that you would see involving geometric forms. We would sit in front of a canvas and look at these geometric shapes and look at the colors and we would ask each other what we thought and I thought that that was pretty good. I guess he trusted my ability to discern imbalance.

You mentioned that the jazz movement has influenced your works and how that movement impacted your style, how has it shaped and reflected in your process?

It was interesting how I was being exposed to that type of music. This was just post bebop, moving into what’s now known as modern jazz, the way Coltrane was going, the way Thelonious Monk was going.

There’s something so pure about that guy. And I used to love to listen to him. I’m 16 years old, traveling down to Sixth Street or the Bowery or Harlem, and these guys are putting out this energy that is so far out. And I realized I had that ability to use that kind of energy. And it wasn’t until I was studying with my uncle a couple of years later that I? started to blossom out.I started to use that energy. You kind of get to the point where you can’t not do it. The process is more of how you live your life, how your day is going to be than an objective, not getting to a goal at the end. Throughout the whole process, and I also learned this from my uncle, is to stay out of the commercial world, to avoid what’s going on in the marketplace. Keep the process of engaging in the expression as pure as possible.

Can you think of a specific song, from that era, that best describes your process?

“Straight, No Chaser” by Thelonious Monk.

What made you decide to move to New Paltz?

I spent a year abroad and decided I would go upstate and do some landscape painting, because if you look at what New York art was like in the 1970s, it was pathetic. People were shooting themselves in the arm in a gallery in order to get attention. It was an insane time. So I decided to try to get away from it. And a friend of mine said, “If you want to go upstate, why don’t you start with New Paltz?” And so I did. I got out of the car, it was a beautiful sunny day, and everyone’s walking around in shorts and t-shirts. There was the Wildflower Café, the health food store, P&G’s. The vibe was there. In New York, painting was dead. I was soon to discover that in New Paltz, it was alive and well. So I went into a realtor’s office, and they said to go down to the health food store because that’s where the person with the apartments was. I get there, they said, “She’s out, but she’ll be back in about two hours.” So I went down Church Street, went to the café, had a nice meal, came back, met Judy. She took me to an old barn where the apartment was, and I said, “I’ll take it.” All it took was three hours of walking around for me to make the decision.

What do you think defined the Golden Age of New Paltz?

It was primarily the college and the Art Department. It was all the teachers who believed in painting. That’s really what made it that.

After Thousands of Shows, Costume Designer and Alumna Aletta Vett Expresses Herself through Art

Wed Dec 5 , 2018
Written by Marla Ogden Story edited and packaged by Jessie Russell Students in Professor Lindsay Lennon’s Feature Writing class were assigned interviews with SUNY New Paltz alumni who were featured in Wired Gallery’s “Golden Age of New Paltz” exhibition. This is what they found: Featured images by Jack Murphy and […] 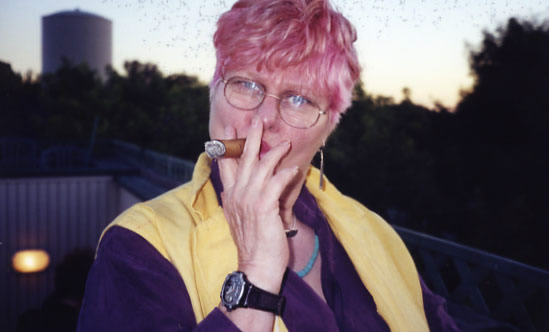