Lani Volino enters Parker Theater wearing a yellow cardigan, blue jeans and a white scarf which hangs loosely around her neck to complement the Chuck Taylor Converse at her feet. She is 22, a senior at SUNY New Paltz majoring in theater, originally from Levittown, NY. Her chocolate brown hair rests at her shoulders and her smile illuminates the dim lit theater as she reclines into a maroon seat in one of the front rows. Volino shares that she came here as a freshman to become a performer, but realized she was destined for a different career path when she was offered the opportunity to become an assistant stage manager.

That career path is surely on its way; “For Colored Girls Who Have Considered Suicide / When the Rainbow Is Enuf” will be Volino’s first time filling the role as production stage manager. The ball is in her court; she is pulling the strings and has the final say. She is driven to maintain the visual imagination of the director, Bria Walker, and the artistic integrity of the writer, Ntozake Shange, who recently passed away in October of last year. Assistant Director Lester Mayers came forth to acknowledge Volino’s hard work, “Lani is an amazing stage manager. She helps creates an environment where creativity can exist and thrive! From production meetings to rehearsal she is on it like Naomi on a runway! Her entire stage management team is filled with positivity and make room for laughter when rehearsal gets too tough!”  Volino assumes the role of “Director de facto,” as she cues cast members and calls crew members to their positions. When asked for a quote about Lani’s character, her assistant stage manager, Emily Kimoto, said “She is the superhero and I’m her sidekick. We work so well together and our team is so great. I have learned so much from her and she is always organized and puts all her heart and passion into every rehearsal.” She is the Maestra, conducting rehearsals which take place five to six times a week. She remains the first one to arrive and the last to leave as they prepare for the premiere which will take place on Feb. 28.

Q: How did you get into theater? Who are your influences?A: I was kind of always into it, constantly watching musicals when I was little. I was a performer in middle school and high school and I decided to continue on in college. I was influenced by people I know more than by celebrities, for instance,stage managers from the past have really helped motivate me and support me. Faculty like Catherine, our stage management professor, have been super helpful and inspiring.

A: Yes, but if anything, it’s the first-time jitters. I feel prepared, and everyone is really supportive. I am not afraid to ask questions; we have a team and we delegate responsibilities. Everyone has been amazing from the beginning. The actors have been working really hard, the designers are so creative and have constantly been coming up with these ideas that make me go ‘whoa’…people in the audience are going to cry.

Q: From my understanding, the production stage manager’s duties entail calling the show, sound, lighting, reading lines… is there anything I am missing?

A: As production stage manager, I facilitate production meetings, rehearsals, make sure actors get their breaks and I also pass along information. I basically get everything ready. I start cues once we get into tech. My production assistants run around and keep everyone on track. We basically do everything for the cast: keep track of blocking, so if the cast forget where they were standing, we can check and notify them. We keep track of sound, where lights go, we communicate with the production team, handle paperwork and keep track of inventory.

Q: What do you think is the most iconic thing about this play?

A: It is a different format than pretty much any play out there. Shange’s choreopoem style is very unique and it does not shy away from its topics. It speaks directly to the audience and brings to life each issue. It’s really an important play and I think it’s really going to touch people differently from other plays. Shange’s recent passing also adds meaning to it: we want to honor her memory so we played around in design, found a hidden meaning in her name and we will subtly introduce it along with some Easter Egg during the show.

Q: Do you feel like you have to be a female to truly relate to this production?

A: I am not going to say everyone will relate to it, but everyone will be able to sense how important the issues mentioned are. These are not things that everyone goes through so it is kind of a special struggle to witness. It will touch many, especially some that have not be exposed to this kind of theater before. This show is for everyone, you do not need to be African-American or a female for the show to really hit you.

Ifeoma Ukatu appears as the Lady in Orange, a character that embodies Ntozake Shange’s creation of choreopoetry: dramatic expression that combines song, dance, poetry and music

"It's the Beat That Keeps Her Going"

Mon Mar 4 , 2019
“For Colored Girls Who Have Considered Suicide When The Rainbow Is Enuf” tells the story of seven women of color who find unity through the shared oppression of a racist and sexist society to form a sisterhood through stories of love, empowerment, struggle and loss. The play will be performed […] 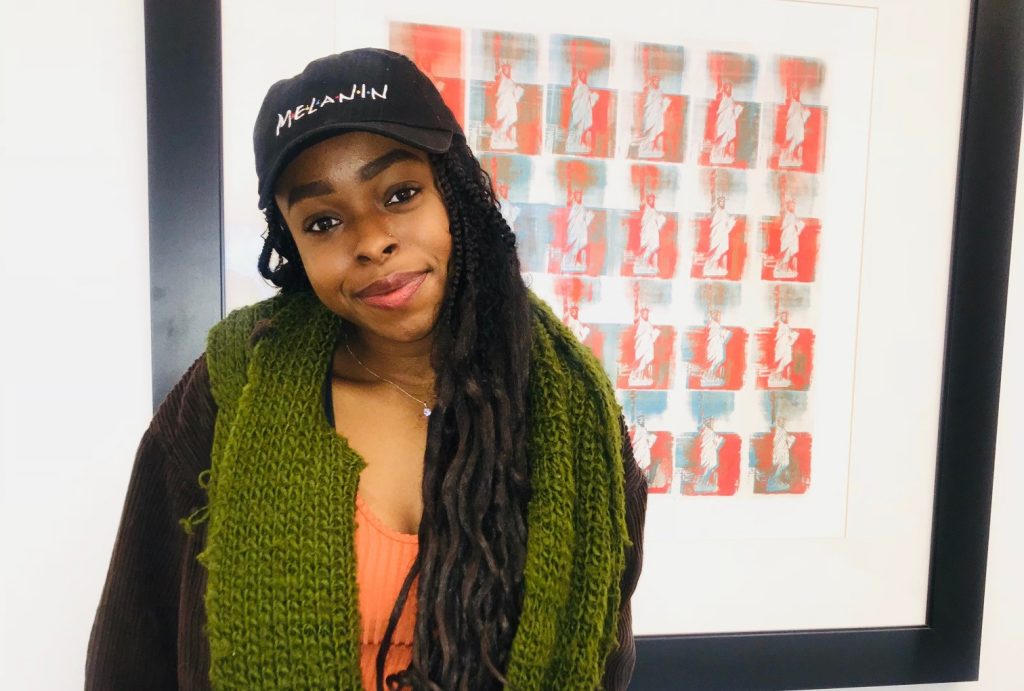