For the last 11 years, for a few days in October, the Woodstock Film Festival utilizes a number of local theatres in premiering any number of local and non-local independent films. The Rosendale Theatre just so happens to be one of them.

If you’ve never been to Rosendale, N.Y., what you’d find if you visited is a cozy little town tucked away in upstate New York. Walking down Main Street, you’ll notice gift shops and an old library, but won’t really see too many people outside. At first glance, there won’t seem to be anything different about Rosendale from any other quaint little upstate town, save for the historical Rosendale Theatre, which opened its doors more than 60 years ago in February 1949.

Eve Waltermaurer, one of the board members of the theatre, stated that the goal of the Rosendale Theatre Collective is to preserve the theatre in hopes “to enhance the economic vitality and preserve the social vitality” for the community of Rosendale. Currently the theatre is being run solely by volunteers to sell popcorn, work the ticket booth, do marketing and so on. In that sense, it is truly a “community” theatre.

While the Rosendale Theatre is one of the only single-screen theatres left in the U.S., it’s unlikely to be placed up for bid at an auction. The theatre is fiercely dedicated to showing only independent films, and is expanding to other forms of art, as well. It is currently home of the local Actors & Writers group, and the theatre offers space for both Dance theatre as well as traditional theatre and musical performances. Let’s not forget that in the past week, during the Woodstock Film Festival, it was home to independent movie premieres such as “Welcome to the Rileys,” starring James Gandolfini and Melissa Leo, and “Henry’s Crime,” starring Keanu Reeves.

Not only has the community of Rosendale been able to preserve a historical gem of the Hudson Valley, they have also preserved an outlet for independent film makers, as well as other local actors, writers and performers.

For more information, go to: www.rosendaletheatre.org.

Thu Oct 7 , 2010
This summer’s state cigarette tax has caused many to snuff out their addictions, but this is not the case for many SUNY New Paltz smokers. The tax was instituted with the intent to discourage smokers for health reasons and create some deeply needed profits for the state. Since the tax […] 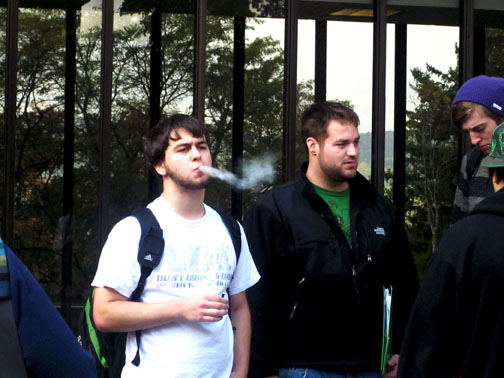