Tatiana Saintilus, a freshman theater arts major with a concentration in performing arts, stars as one of the seven women in SUNY New Paltz’s production of “For Colored Girls Who Have Considered Suicide When The Rainbow Is Enuff.” Through poetry and dance, these women tell stories of love, sex, violence, isolation and death. Tatiana plays the role of the Lady in Yellow; one of the main characters of the play. Each of the seven sisters are named after a color related to their personality and attributes. All seven colors–Red, Orange, Yellow, Green, Blue, Brown and Purple–tell their own story of what it takes to be an African-American woman.

Q: What made you want to become an actor?

A: I started off dancing. Being a part of productions has always been something I’ve done, but theater came a little later for me. Just the ability to interpret text was something that I found really interesting; to be able to take an author’s words and to create a tangible being is kind of cool–creating a 3D figure with multiple dimensions.

Q: What is “For Colored Girls” about?

A: For Colored Girls is really about the journey of overcoming the deep depression and becoming on the brink of suicide. For Colored Girls takes people on a journey. It’s not mainly about suicide, which some may think it is. Having depression is a part of it, but it’s mostly about finding your way through it and coming to accept who you are, so I’d say it’s about the journey of overcoming suicide.

Q: This play is written as a choreopoem; what should people expect from it?

Q: What are some differences between yourself and the Lady in Yellow?

Q: Do you prefer interpreting characters who are different from your personality or do you prefer when you can recognize yourself?

A: I’d say different. Mainly because it challenges me and it also helps me to really think about a character. Sometimes when I get characters that are similar to myself, I get into this kind of comfortable zone and it doesn’t really push me. So it’s fun when I do get a role that is different from myself; I enjoy exploring, and seeing how the other half lives. That’s what I love in theater: taking an author’s words and creating someone new.

Q:How do you immerse yourself into the character of the Lady in Yellow and relate to her?

A: One of the things I do is I’ll just observe other people who I think are similar to my character. I try and get into the mind of the Lady in Yellow; how she talks, what she wants. I’ll read the script multiple times and try to think as she would, which helps me to understand who she is. In the opening scene, Lady In Brown asks a central question about whether or not people hear black girls’ voices, and just like her, sometimes I go through life thinking that I’m not heard. It’s hard to get your point across, especially when everyone has these stereotypes about who you are and who you should be. There is this scene where my character Lady in Yellow is talking about how she can’t believe that she got hurt. And sometimes I can definitely relate to that situation. When things don’t happen as planned, it opens your eyes to see that you can’t control your life and you have to roll with the punches.

Q: What are some of the things you enjoy playing the Lady in Yellow?

A: I really enjoy who she is as a character. She’s very different from myself yet similar in so many ways. She’s more of a optimist. I really love the dancing as well. And the topics that she talks about opens people’s eyes. Each character in the show has their own world view that they talk about, but there’s this certain unspoken topic that the Lady in Yellow delves into which I really like. She wears yellow because she is bright, insane and has a childlike innocence. In a way, she is the light of the play.

Looking the Part: How Hair and Makeup Tell a Story

Thu Feb 28 , 2019
“For Colored Girls Who Have Considered Suicide When The Rainbow Is Enuf” tells the story of seven women of color who find unity through the shared oppression of a racist and sexist society to form a sisterhood through stories of love, empowerment, struggle and loss. The play will be performed […] 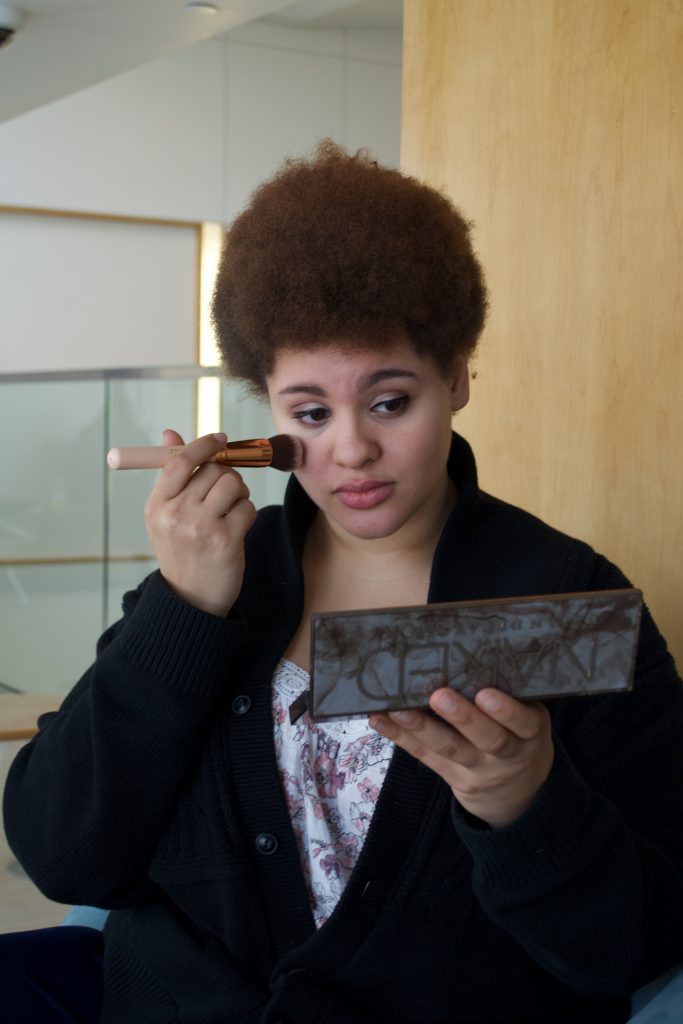