On April 28, The Who’s Tommy, under the direction of Jack Wade, kicked off its’ 10-day run at the McKenna Theatre. The Department of Theatre Arts, with support of Campus Auxiliary Services, was pleased to present the play through special arrangements with Music Theatre International.

The story takes place during the 1940s in London, when the goal was to create the first modern welfare state. Today, London is a vibrant and modern city, but Tommy shows that this wasn’t always the case. Britain was over $14 billion in foreign debt, only kept alive by a loan from the United States.

“It is at this intersection between physical destruction and hope that the story of Tommy begins,” said Hamilton Stapell, an assistant professor from the history department.

Tommy is the fourth album by The Who, released in 1969, and written from the perspective of the “Pinball Wizard” himself, Tommy Walker. Originally written by Pete Townsend and Des McAnuff, the play coining the phrase “rock opera” was brought to life with the help of many. Stephen Kitsakos was in charge of musical direction, giving character to The Who’s already unique music.

“It rarely uses silence,” said Kitsakos. “Even its quiet moments can be ear-shattering.”

Tommy takes place during the post-World War II shift, when rock and roll had an overwhelming power over youth. The Who was one of the most influential rock groups of their time, inspiring other artists such as Led Zeppelin, The Clash, The Ramones and, most recently, Green Day.

The play starts with an energetic number, wedding the Walker’s in eternal happiness. Shortly after, it’s discovered that Captain Walker (Michael Blais) is captured, leaving Mrs. Walker (Jenna Kate Karn) to fend for her newborn baby, Tommy. Mr. Walker was believed to be dead until after the war was won, and he comes home to an unpleasant surprise.

Tommy witnesses his father shoot his mother’s lover on her 21st birthday, traumatizing him into a catatonia. Tommy was played by James Hyland at the age of four, and then transitioned into Elias Childress for Tommy at 10. The murder was the first of many sickening events in Tommy’s childhood, followed by other family members abusing his unconscious state.

In search of a ‘cure’ for Tommy, his father finds a medical specialist that informs the family that his disabilities aren’t physical, but psychosomatic.

It is not until his adolescent years that Tommy, played by Kevin Berger, discovers his knack for pinball, becoming an international pinball superstar after his mother shatters through Tommy’s seemingly emotionless state. Berger flawlessly demonstrates the dazed external appearance of Tommy, while exerting energy and emotion into his musical performance.

After being cured, Tommy begins to spread his teachings to anyone willing to follow. He tries to get his followers to blind, deafen and mute themselves to achieve enlightenment. His ideology is then rejected, once it’s revealed that his enlightenment was reached by discovering a state of awareness as opposed to being cured.

Tommy dives into familiar themes: a boy struggling against a world of oppression, corruption within a society and the personal quest for enlightenment. The cast of 24 gives life to these themes through choreographed singing and dancing.

The cast works as a group to deliver the story, always aware of their faces and involvement to the overall play. With the help of over 100 production staff members, the play is enhanced with the use of lighting and costumes.

Tommy opens up the audience’s eyes to problems on an individual level, as well as societal, revealing the corruption present during the hard times in London. The play can be analyzed on multiple levels, but one fact seems to hold true: “That deaf, dumb and blind kid sure plays a mean pinball.”

Thu May 5 , 2011
“In this country, chemicals are innocent until proven guilty,” said Andi Bartczak, a local science consultant with a Ph.D. in environmental toxicology. “What are you going to do about it? Students at SUNY New Paltz may not be threatening to sue the federal government, like New York Attorney General Eric […] 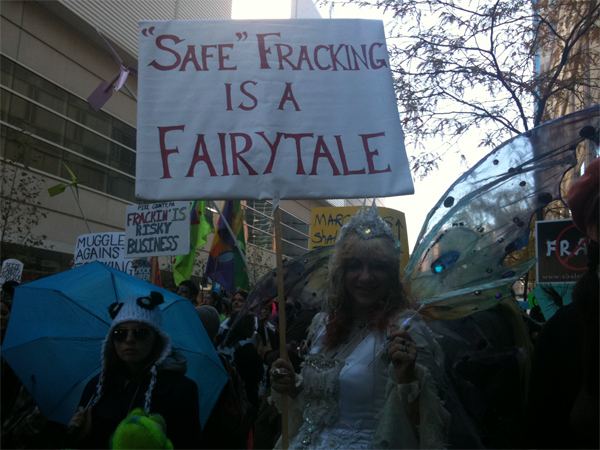