“In this country, chemicals are innocent until proven guilty,” said Andi Bartczak, a local science consultant with a Ph.D. in environmental toxicology. “What are you going to do about it?

Students at SUNY New Paltz may not be threatening to sue the federal government, like New York Attorney General Eric Schneiderman, but they are educating their peers about environmental issues during Sustainable Action Week. The Sustainable Living Collective, a group of ten on and off-campus organizations, organized this weeklong series of speakers, workshops, movies, and activities.

Wednesday was devoted to water. About 50 students and members of the community attended a screening of the documentary, “Living Downstream,” followed by a Q&A session about hydrofracking and pollutants that may threaten our drinking water.

In “Living Downstream,” Sandra Steingraber, Ph.D., says when she was diagnosed with bladder cancer her doctors didn’t mention environmental factors that may have contributed to her disease. Now, she travels throughout North America speaking about the connection she has seen as an environmental biologist between pesticide pollutants in drinking water and illness.

“We know for certain if we took carcinogens out of the air, food, and water that we would save somebody’s life,” said Steingraber. “I don’t know if it would be mine, but it would be somebody’s.”

Farmers in the United States began using synthetic pesticides in the 1930s, but they did not become widespread until after World War II. Now, the Environmental Protection Agency (EPA) assesses what sort of risk pesticides pose and creates rules about how it may be used.

Steingraber found that atrazine, an herbicide approved by the EPA, was used heavily by the farms near her hometown in Illinois. She attributes the high cancer rate in her hometown to atrazine infiltrating the drinking water supply. The EPA reports that atrazine is the most widely used herbicide in the United States’ corn and sorghum production.

“It is beyond the ability of the most careful farmer…to keep the chemicals in the weeds they are trying to kill,” she said.

A 2004 study by the San Francisco-based Pesticide Action Network North America found that 100 percent of 9,000 people tested had pesticide residues inside their bodies, including up to 4.5 times more than what the government considers “acceptable” of two particular pesticides.

As the “green” movement and cautiousness about the health effects of pesticides sweep the nation, New Paltz has embraced organic farming.

During the Q&A session, Kate Reese Hurd, a New Paltz native, spoke about the “wisdom” of farming that she thinks has been lost in the “monoculture” of the northeast, where oftentimes only one crop is grown in an area. Pesticides have taken place of natural animal and plant companions that usually coexist with the crop, she says, but this cohabitation is eliminated in monoculture.

“To just stop using pesticides isn’t the answer,” said Reese Hurd. “[Farmers] have learned about pesticides, they can learn about other things.” By other things she refers to companions for their crops.

The Sustainable Living Collective also focused on a controversial process, hydraulic fracturing, during Sustainable Action week.  Reese Hurd, a member of Frack Free Catskills, a Woodstock/Saugerties-based group, wore a big, red pin on her chest that declared: “Drilling Isn’t Safe.” To Reese Hurd and others who attended the Sustainable Living Collective’s event, the argument is that simple. Hydraulic fracturing, or hydrofracking, is a method of gas drilling where a pumper trunk shoots millions of gallons of sand, water, and chemicals down into a gas well. These chemicals erupt into the ground and cause the rock to crack. The fissures created release natural gas from the rock into the well.  Reports about chemicals used for hydrofracking alarm students like Nick De Palma, a fourth-year sociology major, and representative on the Q&A panel from Students for Fresh Water.

“Formaldehyde, hydrochloric acid, benzene, and then in the rock itself there is radon and radium—these chemicals, if they’re in a [pumper] truck that runs off the road, they wipe out the life in a stream completely and can cause terrible sicknesses,” said De Palma. “People have lost loved ones.”

In December of last year, former Gov. Paterson ordered a moratorium on horizontal drilling. This prohibited high-volume hydraulic fracturing of horizontally drilled wells, like those in the Marcellus Shale region in southern New York, until the Department of Environmental Conservation (DEC) releases its environmental impact study, expected in June.

“We can motivate them, legislators, to put a ban on this and all other regulation agencies to be honest and to share with us the information that is going on with this so people can know,” said De Palma, “…We can motivate them, the people behind these different issues, to give us the honest truth and then the awareness and the overall movement will, in turn, grow.”

This month, NYS Attorney General Eric Schneiderman said he would sue the federal government in 30 days if they do not commit to an environmental impact review of proposed regulations that would allow gas drilling, including hydrofracking, in the Delaware River Basin—home to 50 percent of New York’s water supply.

Friday, April  29 was “Action Day.” The Sustainable Living Collective hosted banner and sign-making in the Old Main Quad and then marched to 21 South Putt Corners Road, the DEC’s Regional Office, to rally against hydrofracking in New York.

On Monday, May 2, the Sustainable Living Collective carpooled to Albany to take part in the Ban Hydrofracking in NYS Action Day Rally on the Capitol Lawn.

For her thesis, Genevieve Marino is educating the campus community about the importance of locally grown food and what’s currently offered on campus.
Video produced by The Little Rebellion.

How to Risk Your Life Safely

Thu May 5 , 2011
“If you don’t go in right, you could get severely hurt.  It’s not a sport for the faint of heart,” said Joe Sellars, 45, owner and founder of AirAboveWater.com, a worldwide cliff-jumping database.  “You can die cliff jumping.” Leaping over jagged cliffs into the unknown waters below seems like cruel and […] 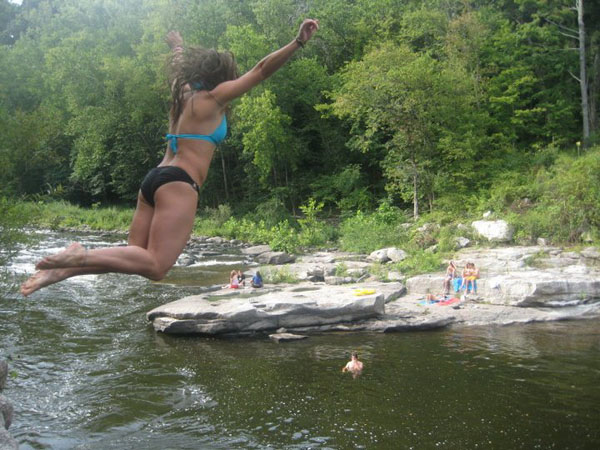