Ghost Mall really hates Slothbear, according to keyboardist Alex Letourneau. Self-proclaimed “summer drummer” Brian Deodat said much of the same about the other group in so many (more explicit) words, as did the “number one roadies,” unofficial band photographers and others passing through the narrow walls of 3A Church St., New Paltz N.Y. for a Thursday night beer.

Sitting inches apart, 10 people shouted over one another, laughing as they tried to recount the almost-fight they had with Slothbear members at a show last summer. Side conversations about other gigs arose in the room that acted as Ghost Mall’s stage more than half a dozen times in three months. Someone suddenly dropped a case of beer, and the perpetrator was met by a chorus of curses and laughter as the cans crashed to the ground.

For vocalist Pierce Lydon, nights like these with bandmates, close friends and good and bad memories are simply “enough” for Ghost Mall members.

“[Being in a band] isn’t something I hope that I’ll get paid a ton of money to do. If I could just have sort of a shitty job and do this too, that’d be more than OK,” he said. “Although I have unreal expectations of life, all I really hope to do is play with my favorite bands and have a good time with my friends.”

While Lydon jokingly claimed Bruce Springsteen came to him in a dream to tell him to form Ghost Mall, Letourneau said the band of SUNY New Paltz students came together by accident. Letourneau and guitarist Cody Torlincasi had collaborated together while attending high school in Farmingdale, Long Island. Lydon showed the pair lyrics for “Johnny Appleseed” and they liked what they saw. Drummer James Sutherland was added and the ensemble was complete.

Six months later, Ghost Mall added four more songs to their set and plays nearly a show a week. Aside from those singing along on the streets of Brooklyn, at New Paltz “zombie proms” and at Manhattan clubs, thousands more can hear the band’s work on the Web. The musicians have taken full advantage of the advent of social networking Web sites; from Twitter to MySpace to Facebook to blog sites, Ghost Mall’s music can be found all over the Internet.

Currently, the group has over 21,000 views of their MySpace page and the songs posted were played over 7,000 times. With Facebook messages sent to the masses about show dates and tweets between bandmates and producers, Lydon said the Internet has been good to Ghost Mall.

“I don’t really know if the MySpace stuff says anything, but I guess that it means people bother to go to our site. I don’t know, I guess that counts for something,” he said. “I don’t think we’ve really seen the dividend with becoming one of these big, hyped Internet bands, but it’s helped us.”

Torlincasi said they are also seeing the impact of bloggers on bands like Ghost Mall and that it’s interesting to see what others have to say.

“It’s cool to just have people to write about us,” he said. “I think using these Web sites helps to get a buzz out.”

The band is reaching out to Web surfers everywhere in an effort to raise funds for their upcoming tour. Ghost Mall will be on the road from March 12-20 en route to Austin, Texas. Since the four college students cannot put together $1,000 for gas money alone, they decided to raise the funds for tour expenses on kickstarter.com.

Kickstarter, an online funding platform used by musicians, artists, designers, filmmakers, journalists, inventors and more, allows users to donate different dollar amounts to a project in exchange for rewards offered by the fundraisers. Whether they offer $1 for digital song downloads or $500 for nine awards (including a visit from the band), “Ghost Mallrats” were able to help make the group’s first tour a reality. Since the Web page entitled “GHOST MALL TOUR 2010: To Austin and Back Again” was created on kickstarter.com in November, the group surpass their $1,00o goal. A benefit show was also held in New Paltz on Feb.6.

Ghost Mall is also using the Internet to promote Friendly Neighborhood Records, a label formed in collaboration with members of the Sunshower Orphans and the Wire Hangovers. According to Lydon, work by “bands that we care about” will be released digitally and available to the public for downloading at fnrecords.blogspot.com. Songs by John Warren were first posted on Sept. 24. Original tracks by the Wire Hangovers, Moon Trees (Letourneau’s side project), Fire to Wood and Ghost Mall themselves soon followed. Songs by Wood Burning Stoves, QUARTERBACKS and Anthony Parks were also posted last December.

Ironically, Torlincasi described Ghost Mall as a “broke-fi gunk pop” band, aka a New Paltz pop group with poorly-made recordings. However, Ghost Mall recorded with Kevin “DJ Teenwolf” Ross of Ninjasonik in November. The band continues to touch up their currently untitled six-track EP set for release in March 2010.

In spite of all the recording efforts Ghost Mall has made in the past few weeks, Letourneau said they look forward to seeing some of the same faces at every live show more than anything else.

“Our fan base is basically our friends, and we wouldn’t have it any other way,” he said. “They know all the words to every song and have just been psyched for us from the beginning.”

Lydon said this correlates with the chorus of “Johnny Appleseed,” which culminates with the line “basements and best friends get us through this.” To him, these lyrics screamed by bandmates and showgoers alike publicly put forth what they’re all about.

“It was our first song but it really still rings true,” he said. “I hope that will never stop.”

Until it does, singing “Moonlight Bay” while walking arm-in-arm towards Fat Bob’s Pizza with a friend tagging behind and cursing Slothbear can be enough.

Thu Feb 25 , 2010
It’s 2 a.m. when SUNY New Paltz senior, Therese Cavalari, finally leaves work. She wears a black collared shirt, black dress pants, and a black apron with the Applebee’s logo on its left side. Her shirt is covered with marinara sauce stains and the bottom of her pant legs look […] 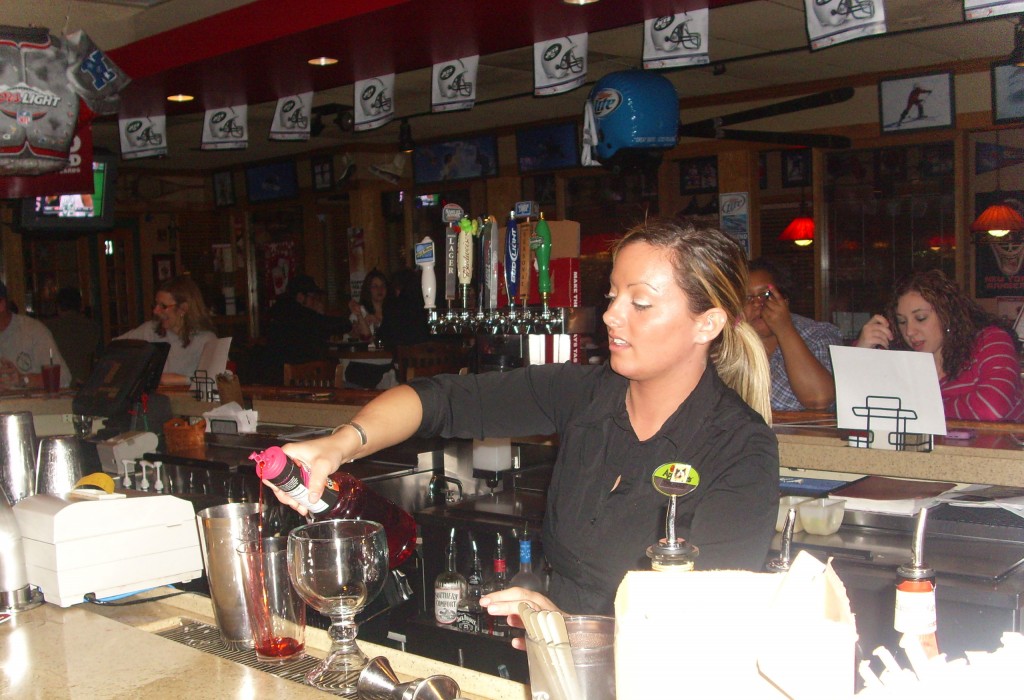