The Democracy Matters’ table stands between some handmade jewelry and produce at the SUNY New Paltz farmers market. Students and locals have come to the market to check out the fresh baked bread, the mountain of books and the student artwork on display.

At the table is the club’s president, Ellie Condelles who straightens a table of flowers. The blue and red flowers have tags with the names of victims from the Parkland shooting. “#NeverAgain” they say, along with John Faso’s name and number, so that takers can call their representative to encourage a change.

A passerby paused at the table, admiring the banner full of signatures that says: “John Faso, There is Blood on Your Hands.”

“Are you registered to vote?” Condelles asked.

“I am,” the girl responded.

“Great,” Condelles said, “if any of your friends aren’t, we’ll be here with registration forms all day! Send them over.”

As president of the club, Condelles constantly encourages her peers on campus to vote. Her activism has grown from personal experiences with the horrors of gun violence to a true passion to make a change. She now dedicates her time on campus to organizing rallies and events, registering voters and providing a place for students to voice their opinions.

“If you have a voice and you’re in a privileged position, you’re obligated to use it to fix things,” she said.

Condelles wants to be involved in issues of social inequality whether it be women’s rights or equality for people of color. She attributes her enthusiasm for advocacy to her parents.
“Growing up my parents always instilled in me a very strong sense of standing up for what you believe in and knowing what’s right,” she said.

A more recent focus for the club has been gun control and reform.

“That’s always been a really big impact on my life and now is kind of the time to get involved in it just because there’s so many movements happening right now,” she said.

Condelles’ exposure to gun violence began at just five years old. Attending kindergarten right outside of Washington, D.C, the start of her schooling was marked by the threat of a rogue sniper.

“The teachers would literally be in a line forming a human shield and they would kind of encompass us as we walked into the school. We would go in the classroom, the blinds would be drawn and we wouldn’t be able to go outside for recess,” she said. “The door would be barricaded. I didn’t necessarily understand what was happening but I knew that there was a lot of fear around me. And that was kind of hard because I’ve never forgotten that. That’s always been just drilled into my mind.”

Recently, Condelles organized a rally that took place on the New Paltz campus, where those infuriated by the countless mass shootings could express their frustration. It was in front of the Coykendall Science Building, that she delivered a heart-wrenching speech about her cousin who lost his life to gun violence.

“When I was ten, I had an older cousin who lived in Las Vegas with my aunt and uncle and he went to his friend’s graduation party. A dispute broke out and the perpetrator came back with a gun and shot up the party and my cousin passed away. I didn’t know him very well because there was a big age difference and I was young at the time,” she said. “But my mom helped raise him. So that was really hard. I just kind of saw how it destroyed our family. So I’ve always kind of grown up with that influence over my life.”

Condelles’ personal experiences with gun violence is just part of what motivates her activism. Her drive is to also help others who have been through similar situations.

“It’s just crazy for me because I’m not even close to the only person who knows a story like that. It’s so common in America and it just makes me so mad that this is something people have to live with,” she said. “I think now is the time to jump on the issue because of everything that’s happened in the past few years. There’s been a mass shooting in the news like every week. And that’s not okay. And I think people are finally starting to realize that now’s a time for change.”

The gun violence rally was the fifth one Condelle’s organized and she sat on a forum to answer questions. The panel included professors, scholars, and various government officials. She was the youngest person on the panel.

“This is now a social movement,” she said. “And it’s led by young people because we are the ones brave enough to stand up to corruption.”

The bigger problem for Democracy Matters is money and politics.

“Everything kind of just goes back to money, all the corruption that we have in America right now, it’s money,” Condelles said.

With the club’s focus on gun control and reform, the NRA is a source of a lot of frustration for the members.

“They just kind of control whoever they want in congress because they write their paychecks,” Condelles said.

“Voting is so important because most politicians only want to hear stuff that fits in with their agenda,” she said. “We need to get people in office who actually care about what we have to say and want to make a change.”

Condelles also constantly encourages her peers to join activist organizations on campus, volunteer for a campaign they believe in or even run for office if of age.

In addition to her peers on campus, Condelles’ family and friends are also subject to her passionate conquest for change,whether they like it or not.

It is flattering to Condelles when people tell her that she has influenced their views. She admits her stubbornness tends to break people down.

Condelles’ zealous advocacy has only gotten stronger with the recent political climate.

“I get really frustrated with the two-party system in politics today because so much of it is not even red or blue, or democratic or republican, it’s not being a dick, you know? Your views reflect who you are as a person,” she said. “It’s not so much an opinionated thing anymore, it’s morals and what’s right and wrong.”

Condelles’ actions have placed her in an important leadership role on her college campus. Students have emailed the president of the school, wanting to know what the campus was doing in the wake of mass shooting after mass shooting. They were sent to Condelles and her club.

“A lot of people have misplaced passion,” she said.

Her club has become a pillar for action at New Paltz. Condelles’ compassion for others and determination makes her a force to be reckoned with now and in the future.

Brianna Knight’s Quest for a Difference

Mon Oct 29 , 2018
Students in Professor Lisa Phillips’ Feature Writing Class were assigned to profile people at the forefront of change: Brianna Knight, a slam poet and co-president of SUNY New Paltz’s Melodía and Movement, uses her platform to increase cultural awareness and celebrate minorities. Brianna Knight, the co-president of Melodía and Movement, […] 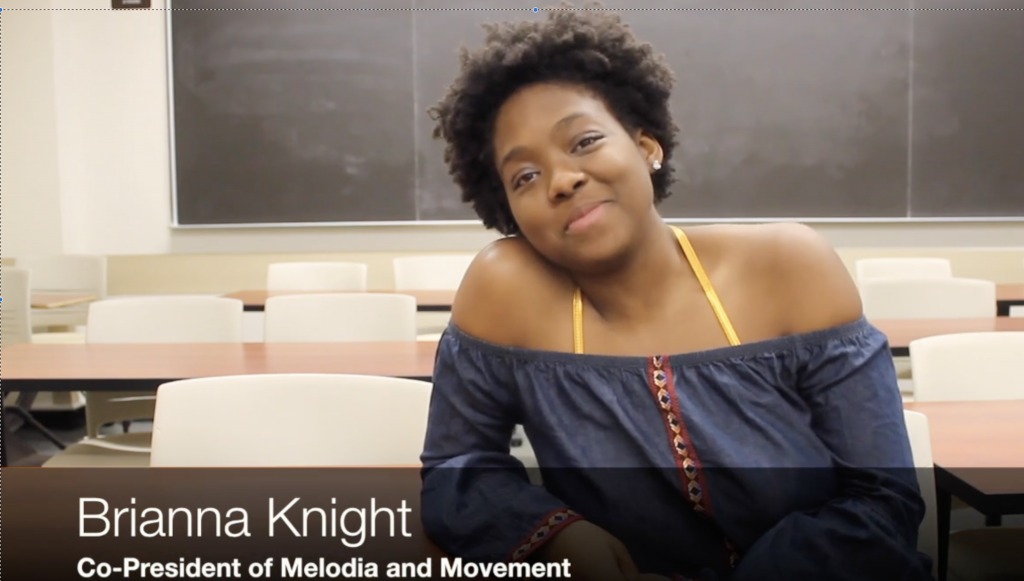