It’s a brisk Thursday in New Paltz. The weekly farmer’s market is in full swing when students rushed passed vendor tables, hoping to make their 12:15 p.m. class on time. Others stroll along the academic concourse, gazing at the variety of food and trinkets for sale. Fresh bread and pastries, handmade soaps and macaroons displayed on tables ready to be bought.

Billie Golan, the head organizer of the farmer’s market, dons an oversized denim jacket, high-waisted light-wash jeans and a bright orange bandana that holds her bangs out of her face. She walks from table to table. She greets other students with a smile and a wave. Some are lucky enough to receive a hug or a high five.

“Oh, I don’t want your dirty money,” Golan says with a smile. “It’s free! Take a plant. This one harvests cucumbers and this one hot peppers. Let me hook you up.”

The farmer’s market is held every Thursday between 10:30 a.m. to 3 p.m. 3 in the Lecture Center, or the academic concourse weather permitting. Vendors range from honey farmers selling honey-based products to a mother-daughter duo who sell jewelry with stones they have mined themselves.

The student organizations Hippies for Hope, Global Medical Brigades, Student Association and others table at the market to gain exposure for their cause. The farmers market connects the local sustainable community to the general student body in hopes of educating students on their surroundings to spark an interest in sustainable agriculture.

As green initiatives, such as the plastic bag fee in New York State, become more popular, the trend towards sustainable, local, and organic food increases with the help of people like Golan on campus communities.

The following week the sun is shining as Golan bikes across campus to her meeting with Steve Deutsch, the director of the Campus Auxiliary Services (CAS) at SUNY New Paltz, and Faathyma Clark the secretary of CAS. Billie, Deutsch and Clark speak about who the next manager of the weekly farmer’s market will be once Billie graduates in May.

“The dedication Billie puts into her work is outstanding,” Deutsch said. “You can tell just how much she loves what she does. The school doesn’t make any money off of the farmer’s market. Wee basically break even, but the campus and local community love it.”

Billie has single-handedly managed the farmers market for the past three years.

“It’s funny because they’re going to need at least two or three people to continue the market and to do the work that I’ve been doing by myself,” Golan said. “Managing the market while being a student is really tough. There was a lot of unexpected responsibility when I first took the market over, but it has been a real pleasure to facilitate it every week and get to know the vendors and farmers that are from the Hudson Valley and the engagement that they have with the students and the community members.”

However, the market is more than just a place to buy goods. It is a place for connections to be made, for strangers to become friends and for the community to grow. Golan sees the campus as a bubble where a lot of students don’t engage with the town or surrounding areas. Golan has never lived on campus, which gave her an opportunity to see what the Hudson Valley had to offer: open healthcare fairs, alternative medicines and library sales.

“Community is not just about knowing your neighbors but about knowing what other functions are happening outside of your bubble,” Golan said. “It’s like a machine. You have to ask yourself what other cogs are out there and what’s spinning the wheels? Being a resource for other people is something I really love to do. I love to fill gaps and connect people to what they’re looking for. I like creating a sense of community and making a cool place to gather every Thursday that people like to hang around. I love the person-to-person engagement that happens.”

When she arrived at SUNY New Paltz in 2014,  Golan created her own major in Environmental Studies that included traditional science classes but added in sociology, anthropology and black studies courses.

“There was a sense of freedom that came with choosing classes that weren’t just in environmental sciences because that’s not what I wanted to be doing,” she said.

As an eager freshman walking through the farmers market, before she had any involvement in the inner workings of it, Golan stumbled upon a man with long hair and a backwards cap standing at a table and the only thing on the table was garlic. He introduced himself and the group Students for Sustainable Agriculture (Sus-Ag) saying that he grew the garlic himself.

A couple of weeks later Billie became the seventh member of Sus-Ag and from that moment on she was hooked on agriculture. She spent a lot of her freshman year in the micro-farm behind Esopus Hall ripping weeds out. She’s not too sure what made her keep returning. It could have been the ambiance, the learning outcomes or the sheer fact that she had nothing better to do, but it changed her life.

“Sus-Ag fills in the gap for students who want to do environmental studies but not focus on the scientific aspect like biology,” Golan said. “It’s there to do ground level work: get your hands in some dirt, plant some stuff, and learn how to harvest. We had a general interest meeting with 54 people but it shows that there is a huge interest in this community and Sus-Ag is there to fill that gap.”

Golan aims to show as many people as possible that self-sustaining agriculture is much more simple than people think it will be. “It’s really as easy as reading the seed packets, giving it enough sunlight and care,” she said. “I have never heard of anybody that learned how to farm and regretted it.”

Golan’s grandparents on her mother’s side escaped from genocide in Eastern Europe during World War II. However, she continued to be oppressed due to their Jewish identity. Billie’s Israeli mother saved everything. She did not throw away food and bought very cheap clothes.

The values Golan most carries with her today were instilled from a young age by her anti-war grandparents, Sam and Joan Goldstein. Her grandfather Sam, came from less than humble beginnings, living in the lower east side in tenement housing then proceeded to serve in World War II. Likewise, Joan grew up in the city, but went on to become a social worker for most of her life. They traveled throughout Russia in a van hoping to help the revolutionaries free their country and felt strongly about bringing socialism into the United States.

“Their main goal was to provide equal opportunity to resources,” Golan said. “My grandma wrote letters to Obama and would thank him for the social systems he tried to put in place.”

Her grandmother was the first person to take ten-year-old Golan to a protest against the United States’ involvement in the Iraqi war.

Joan also introduced Billie to composting at the ripe age of five.

“I remember when she was cooking she would have a separate baggie for scraps and when she was done cooking we would go out together to the back and there was this fence with a giant compost heap,” Golan said. “She would put on Joan Baez and other anti-war, ’70s music and she taught my sister and I how to do yoga.”

“Everything my sister and I are doing now is very similar to what my grandmother and grandfather were doing,” she said. “I want to do agriculture education once I’m done here and if that first step means being in charge of the farmers markets and bringing local businesses and sustainable initiatives to campus and that’s my responsibility then that’s great.”

Although Golan’s future after graduation is not certain, she is hopeful in what her next journey will bring her.

“I have found what makes me happy,” Golan said. “I love working with kids and teaching them that earthworms are cool. I’m not like a regular adult. I’m just a big kid.”

A Young Man’s Love for Theatre and Change

Thu Oct 25 , 2018
Students in Professor Lisa Phillips’ Feature Writing Class were assigned to profile people at the forefront of change: Caleb Sheedy, theater major at Syracuse University, single-handedly organized a walkout at New Paltz High School after the Parkland Florida shooting to create a platform for change on gun violence. “You never […] 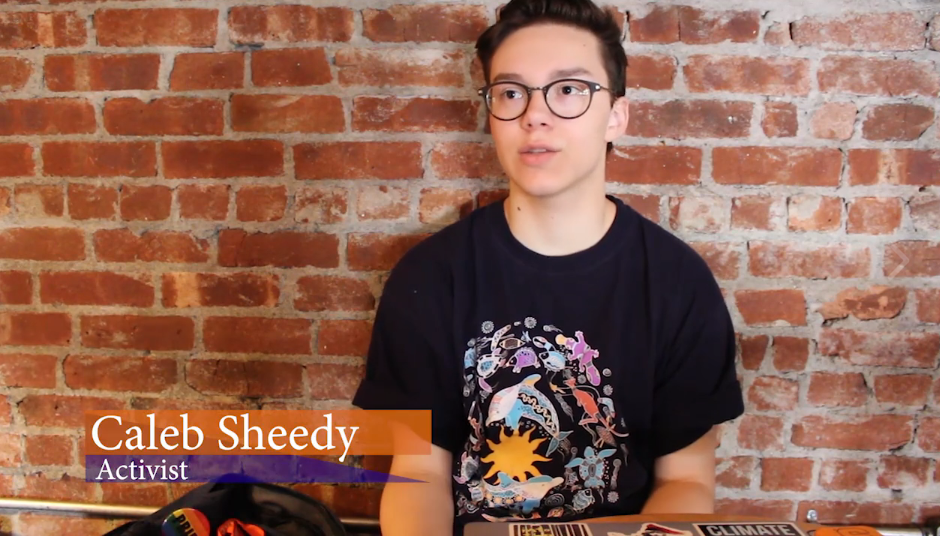