“You never expect to know someone in these mass shootings,” said 17-year-old Caleb Sheedy as he sips his large hot coffee, reading an article from his laptop.

Coffee is brewing. You can hear the sound of fingers typing on keyboards over the classical music on the speaker. Sheedy likes to come to Cafeteria, his favorite New Paltz coffee shop, on the weekends to do his homework. His favorite spot is on the green and orange striped couch close to the side exit door. It’s where he wrote his speech  to prepare a protest on gun violence.

“This is one of the biggest protests I did,” Sheedy said. “I was happy with the outcome of people who walked out with me.”

Sheedy is passionate about researching gun rights and gun control. “I personally want to be a part of a movement that creates gun control regulations,” he said. . He believes the second amendment needs reformation. He also wants to ban all bump stocks and close the gun show loophole. He also believes there needs to be more extensive background checks.

“I want to rewrite our history. I want to help make this change. Voting or protesting, I just want to be apart of this change anyway I can,” Sheedy said.

Sheedy is a fourth-year student at New Paltz Central High School. He says his friends call him an ‘outgoing, friendly people person’ who enjoys doing theatre and singing weekly. He has a passion for acting; he starred in his school’s musical production “Pippin” as Leading Player.  Therefore, Sheedy likes the spotlight.

“Theatre allows me to step into a role and become someone who I am not. I am able to escape reality and the world around me and just be someone new in a whole different world,” Sheedy said.

When Sheedy found out about the Parkland shooting, he, just like many other people were frightened and speechless. Sheedy read several online articles and saw Snapchat videos of blood, dead bodies and even heard the bullets from Cruz’s AR-15 snapping.

Sheedy had a friend named Alyssa, whom he met at his cousin’s Bar Mitzvah when they played musical chairs. They followed each other on Instagram, but that was it. He only knew her as Alyssa and that she went to school somewhere in south Florida.He didn’t know she attended  Marjory Stoneman Douglas High School. It wasn’t until the night after the Parkland shooting when Sheedy’s cousin posted a picture of Alyssa Alhadeff, one of the 17 people who was murdered by guman, Nikolas Cruz.

“As a highschooler, I think that could have been my school, and it can still be my school,” Sheedy said.

A few days after the mass shooting, Sheedy was on Facebook and read a post that the Women’s March was planning a walk out for the Parkland victims. Sheedy knew he wanted to take action. After days speaking with assistant principal, Tara Ryba, he drafted a letter to the New Paltz Central School District Board of Education. After Sheedy sent the letter, he got the approval to organize a walkout at his high school on March 14th.

Sheedy had a lot of support behind him throughout the process. His journalism teacher, Joel Neden  helped Sheedy write his speech and Lynda Costello, his social studies teacher and student government advisor, told Sheedy to not “attack” the board of education in terms of being rude or unprofessional. She made Sheedy realize no matter how upset he could get, he needed  to remain calm and sophisticated.

“I knew Caleb was going to make change because he’s the ‘go-getter’ type of person,”Costello said. “His walkout was just one of the many amazing things he accomplished here at the high school. I can’t wait to see what else he’ll later do that impacts the future generations. I really do have a lot of faith in him.”

Sheedy planned a candlelight vigil for his friend who committed suicide three years ago. He said planning this walkout was a similar process to planning the vigil since he needed to get permission from the mayor and get a public park use form. However, this walkout was the first biggest protest Sheedy had done himself.

The walkout ended up being 19 minutes long.

“Seventeen minutes of silence does not merely represent the 17 lives that were taken from the Parkland Shooting,” Sheedy said.

“A lot more kids than I thought stayed in the school,” he said. “The juniors were on a field trip and other students didn’t agree with the idea, which is okay because everyone is entitled to their own opinion.”

Also, the weather was very cold that day. Students who weren’t truly passionate about this wouldn’t stand out in the cold.

“I grew up with school shootings,” Sheedy said. “I knew them all my life. I was born just a few years after Columbine, so it’s like in my second nature to be ready and prepared if a gunman were to enter my school. Yesterday there was an all county chorus festival and it suddenly got cancelled. My school announced it was an emergency and my immediate thought was that there was a gunman on campus. It was actually cancelled because the school lost power.”

Sheedy is always cautious with his surroundings. He checks doors and exit signs in rooms in case of an emergency.

“You can’t live in fear, but it’s important to be aware what you would need to do in those kinds of situations,” Sheedy said. “It can happen right here, right now as we speak.”

Sheedy remembers sitting in a Chinese restaurant with his parents after he got home from elementary school. The television was on and breaking news appeared on the bottom of the screen: SHOOTING AT CONNECTICUT ELEM. SCHOOL. Source: Shooter dead at scene; 2 handguns recovered. Sheedy’s mom was sobbing. “I will never forget the look on my mom’s face. It doesn’t make sense. Why target little kids?”

Not all mass shootings get the same amount of news coverage. Many school shootings don’t get televised at all.

“Bullying gets by, racism gets by, but what about these shootings?” Sheedy said.

“I am very thankful Parkland has been very different in the media. Unfortunately, it has taken so many school shootings to get to this point where we are not forgetting about it since there’s actual change being made.”

Some of the students from Marjory Stoneman Douglas High School started a movement, Never Again, to advocate for gun control.

New Paltz Central High School school didn’t have strict security beforehand. Sheedy noticed recently New Paltz Police would come to campus, walk around and check in with the principal then leave. Sometimes police would park in front of the school and stay in their car to ward off a gunman in the event that one showed up.

The school administration has been asking students their opinions on new safety regulations such as changing their lock down procedure.

One of the biggest concerns the school administration currently has the new building wing extension because it’s nearly impossible to hide in that wing if a gunman were to enter. Every single classroom is aligned with windows.

“We call them fish bowls because they are completely visible to the outside,” Sheedy said. “So after the administration realized that, they changed the windows to bullet resistant windows. These windows can withstand four to five bullets.

In regards to the Parkland shooting, the school board of Broward County, Florida extended their safety protocols at Marjory Stoneman High School. All students and staff need to wear identification badges at all times on campus and for now, students  need to wear see-through backpacks. However, students have been complaining that the see-through backpacks do nothing for their safety, and only invade their privacy. In reality, millions of dollars are being spent on safety precautions instead of stopping the shootings.

“Our country is like this pair of blue jeans that keep getting ripped. We keep putting patches on the rips rather than just getting a new pair of jeans. We don’t stop the problem, we find ways to work around the problem,” said Sheedy.

Sheedy committed to Syracuse University for the Fall 2018 semester and will be majoring in theater and minoring in political science.

“Theatre teaches you things both about yourself and how you present yourself to others, but also how we see the world and how it’s changing,” Sheedy said. “I really hope there is a musical about gun control soon.”

A Dog Walk to Fight Hunger

Thu Oct 25 , 2018
NEW PALTZ  – Charitable dog owners came together to collect food donations for a local pantry. Dozens of dogs and their owners gathered Sunday morning to stroll the Walkway Over the Hudson in an effort to collect food to be donated to the Family of New Paltz Food Pantry. The […] 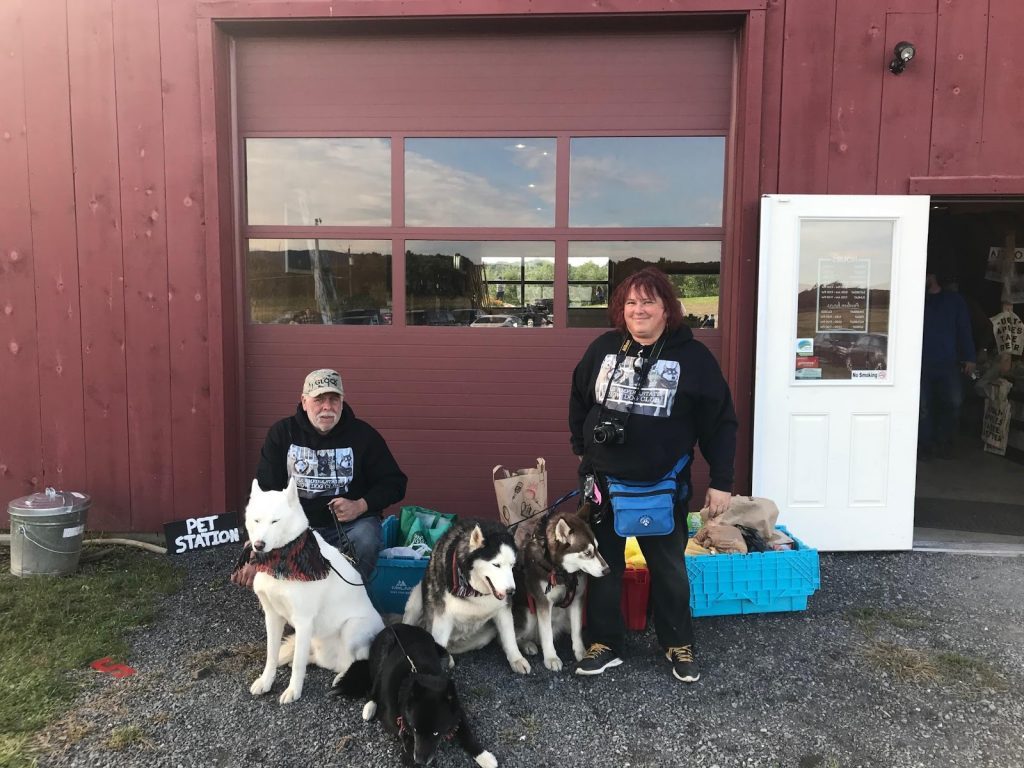