Liam Neubauer is a Alpha Phi Omega member who loves to do volunteer work and community service, especially during rush week. He hopes he can encourage other students to be as passionate about service work as him.

It’s a cold Wednesday night. Exhausted from a long day of classes and meetings, Liam Neubauer opens the door to his warm, one bedroom apartment and is immediately greeted by his Spanish Greyhound, Joanie. He slowly walks into the living room and glances up at the wall. On it is a large blue and gold Alpha Phi Omega banner. He looks up at it and proudly smiles. He walks into the bedroom with Joanie following right behind him.

Neubauer takes off his Ugg boots and gets on the spacious queen size bed with Joanie. He opens his laptop as he gently strokes the missing patches of fur on Joanie’s back. On one side of the screen there is a group chat titled “Rush Week!” One message reads, “What if we have everyone write cards for the nursing home we visited last month?” Another message responds back, “No, we should do something more interactive.”

This semester, Neubauer has the responsibility of coordinating APO’s rush week events, something he has wanted to do since he first attended an APO rush event when first becoming interested in the Fall of 2017. For the first rush event he attended, Neubauer worked with other potential members to write Valentine’s day letters for the elderly in a local nursing home. “After that first rush event I fell in love! I could tell that everyone was really into service work like I was,” said Neubauer.

He will never forget how thrilled he was to find an organization that was as dedicated as he was to doing service work. The only disappointment was when he looked to see how many people were sitting with him; Neubauer felt that there was a huge lack of participation from the student body. After officially becoming a brother of APO that spring, he now believes that he is in a great position as the event coordinator of rush week. With this new position, he hopes to inspire more students to help the community and allow themselves to grow through volunteer work.

Before Neubauer had officially become a brother, he would get negative feedback from his friends when he mentioned that he was interested in Alpha Phi Omega. One friend said, “They’re not even a real fraternity. They just do community service. You won’t get the real college experience if you pledge for them.” Comments like this were concerning to him as he believes this reflects many views of a majority of college students when it comes to volunteering.

The negative comments never once affected Neubauer’s decision to pledge for the organization. Rather, he was excited to become a brother so he could begin to shed light on the importance of volunteer work. But Neubauer would come to find that being a brother did not make it any easier to convince more people to come out and get involved. He quickly realized that he had to do a lot more than wear his letters with pride if he wanted to see more people show up to upcoming rush events.

Alpha Phi Omega’s goal is to develop leadership skills, promote friendship and provide service to humanity. Neubauer has been living by this goal even before the start of his college career. As a young boy living in the Bronx, he saw firsthand how helpful and rewarding service work was to himself and to humanity. He grew up in a household where this was done regularly as a family. When he was in elementary school, Neubauer and his parents would volunteer at nearby soup kitchens during the holidays. Aida, Neubauer’s mother, says, “Most kids his age wouldn’t want to spend the holidays around homeless people, but Liam would beg to come back! He loved it so much.”

He attended Fordham Preparatory School where he was able to further his love for volunteering. “In Fordham Prep, students were required to complete a certain amount of community service hours every year. I can say that I had the best time in high school because of the service work I was doing with my classmates,” said Neubauer. While in high school, he became a certified lifeguard and worked at the White Cross Fishing Club. Becoming a lifeguard was a very huge accomplishment for Neubauer because he saved a few people from drowning. “I will never forget those rescues,” said Neubauer. “To me, saving lives is the biggest service to humanity that I can offer.”

Neubauer has helped a lot of people thus far in his life, but helping Joanie will always be the thing he is most proud of. “I found her from a woman in Pennsylvania who rescues Galgos from Spain like Joanie,” he said. At first glance, Neubauer could not ignore the missing patches of fur on her back, which he later found out were battery acid burns by her previous owner. His heart broke for her. He decided that he wanted to help her and took her home with him to the Bronx. Now, Neubauer and Joanie are inseparable and she is happier than ever. Those scars on her back will always remind Neubauer that being selfless can change someone’s life completely. He uses this experience to teach students about the importance of service work so they can get inspired to get involved.

As Neubauer begins to type in the group chat late at night, he says, “This is where we’ve been discussing our service event ideas for rush week. I just suggested making little goodie bags for students during finals week.” His brothers responded quickly to the chat. “Great idea, Liam!” said one member of the group chat. Neubauer joyfully grabbed for a pen and a notebook in his book bag on the floor and started bullet pointing the materials he would need for the service event. “Pencils, positive notes and candy,” he wrote. “Planning for rush week makes me so excited. I can’t wait to start rush week this semester,” said Neubauer. As he starts planning to table with his brothers, he gives them advice on what they should say to students who want more information on APO.

“This semester I hope that I will see a lot of new faces showing up to our service events.” He will be giving a lot of thought to this semester’s service events as he wants students to find enjoyment in doing it and knowing that they can make a difference even if the task is doing something minor. Not everyone will see the importance of service. Despite this,  there are people like Liam Neubauer that are passionate and willing to dedicate their lives to helping humanity.

After finishing college, he plans on being involved in service events that Alpha Phi Omega will be hosting. He wants to share his story with young adults to motivate them to give back to their community and those in need. “I enjoy helping other people. I couldn’t imagine life without doing service. I really hope that I can get more students to come and see the importance of it through the rush events that APO has planned for this semester.”

Fri Nov 2 , 2018
NEW PALTZ – Congressional candidate Antonio Delgado’s tour of the district made a stop at the State University of New York at New Paltz Thursday evening, where a crowd gathered inside the Student Union Building multipurpose room to hear him speak and ask questions. As the battle for New York’s […] 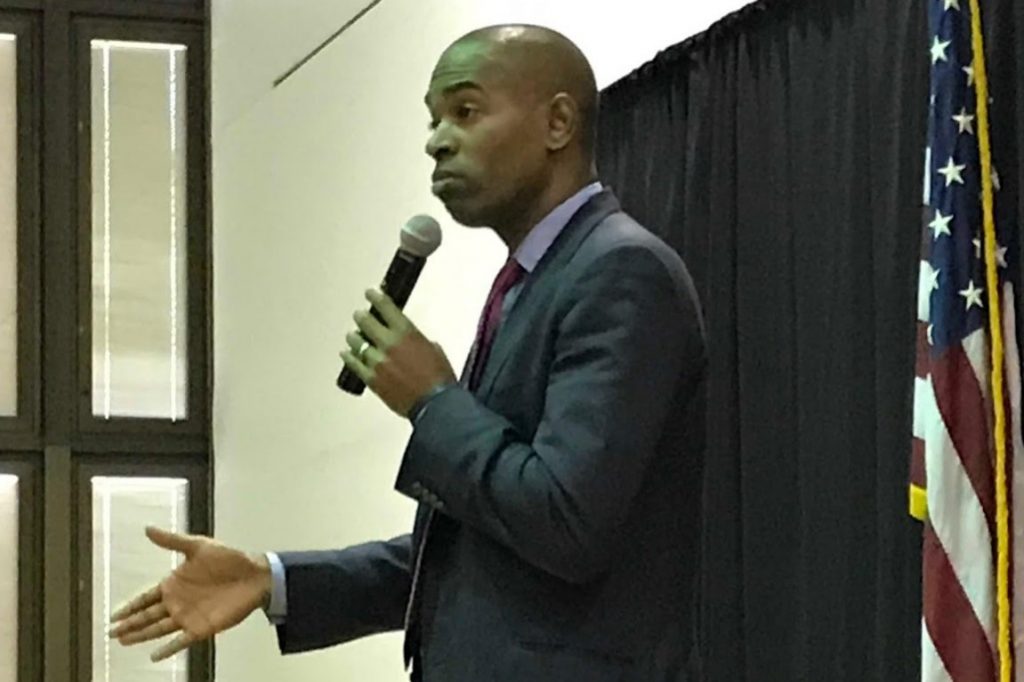