Victoria Precise is a drag queen bringing drag and open mindedness to the Hudson Valley with her shows and large following since her debut in SUNY New Paltz in 2014.

Two girls make their way past the bouncer who marks an X on the back of their hands. They are underage. They, just like a lot of us, are waiting for New Paltz drag queen Victoria Precise, or as known to others, Michael Persico.

Inside, Precise is at the center of it all. Eyes follow her six-foot-something figure, prancing across the dance floor. She slips in and out of the neon lights, perfectly in time with the loud stereo booms.

Precise calls to the other queens.

“Let’s get this show on the road, girls,” she prompts.

She balances on three inch stiletto heels while wrapped up in a corset and shapewear. She throws a beach ball into the air. This is met with squeals from the audience.

There is very little room for personal space, but few seem to notice because Precise starts the show off with reciting the “Pledge of Allegiance to the Fag,” poking fun at the queer community she’s a part of.

Precise, finds herself traveling all over the Hudson Valley after a boom in drag culture following the foundation of a campus organization. By building a following, Precise hopes to continue a cultivation of acceptance of the culture in areas that are otherwise unaware of an integral aspect of the LGBTQ+ sphere.

That being said, Precise is intolerant of hate speech.

“In drag you come across people who accept you and people who don’t accept you. For me, it’s always about opening up the conversation to understand why someone may feel the way they feel,” she says.

Precise says that when faced with someone who is uncomfortable with her lifestyle, she always invites them to engage in conversation, preferably away from alcohol.

“I always say, ‘let’s chat in a more sober environment,’ because nothing is going to get done when people are under the influence, and a lot of the time I’m able to walk away from the other person and help them see that drag is an accepting and fun community,” Precise says.

Since the fruition of the Kings and Queens of New Paltz, SUNY New Paltz’s Drag Performance club, in 2014, Precise’s presence has become a prevalent source of strength for the college campus.

“My hope for every show is to get bigger and more inclusive,” Precise says. “The queer community is not one type of person and our shows are meant to be diverse.”

It was Precise who cultivated the drag scene that exists today in New Paltz. During her freshman year at the college, the queen and a friend discussed the possibility of starting a club.

With a little planning, the two were able to create a safe space for the artform. Performing at venues such as Bangkok Cafe, the organization continued to draw more attention, later forcing a change in venue.

“We loved the staff at Bangkok, but our shows were just getting too big and we didn’t want to have to start sending people away,” she says. “We want our community to grow.”

The club later began performing at Oasis in December 2017.

Growing up near Albany, she was one of the first openly gay students at her high school.

“It didn’t come as much of a shock to people when I started doing drag,” she says.

Victoria Precise explains the importance drag culture has on society and its ability to create a welcoming environment.

Her journey began at her senior year homecoming pep rally when a close friend suggested the future queen play a hand at dressing up. “The name didn’t come until much later. My friend Brandon came up with it,” Precise admits.

“I’m victorious in this art form and my delivery is on point,” she says.

For Precise, the ascent to her identity wasn’t always a smooth ride.

“My family is super supportive, but when I first came out as gay my dad and I didn’t talk for some time,” she says. “He later apologized and we reconciled. By the time I came out as wanting to perform in drag, I said to him, ‘Look, you either accept this or goodbye. We aren’t doing this again.’”

Precise explains that her brothers are a big source of constant support.

“I love makeup so I’m constantly posting videos of me getting ready on social media. I can’t tell you how often I get a text from my brother saying, ‘I really love that look. That’s awesome,” she says.

Dressed as a bunny for Easter after an event in Kingston, Precise giggles when I walk in, knowing that I had been an incoming student the summer orientation that she led. Only then, Precise was Orientation Leader Michael.

“Michael and Victoria are one and the same. It’s a personality. You can call me whatever, except late for dinner,” she says when I ask how she prefers to be addressed.

Precise sits down in her room. “This is where the magic happens.”

Makeup, hair, choreography and rehearsal all take place in a 12-by-12 foot room.

For inspiration in her performances, Precise tells me she is drawn to the strange.

“I really just love Lady Gaga, Rihanna, Cardi B- some of the strangest, most birdlike celebrities out there, y’know?” she says.

Precise explains that, for her, drag is pushing the envelope of what gender is construed to be.

Getting ready for an event is a two week process for Precise and other queens. Two weeks to create a routine involving dance and lip syncing and to come up with the perfect outfit. In an environment where the outfit is primarily the focal point, it’s essential to think about wardrobe malfunctions before they even happen- “And even when they do happen, we just laugh it off. It can’t be too much of a big deal,” Precise says. “You’ve got to laugh at yourself.”

Having graduated with a bachelor’s degree in psychology from New Paltz in 2017, Precise knows she is fully equipped to help people understand the artform.

“Studying psychology has allowed me to continue to try and open that door for acceptance,” Precise says.

Precise says she is constantly bumping into people who know her as both Michael and Victoria. She credits this to her studying her undergraduate degree at the college and working locally at the village Starbucks in between performances. Day in and day out, Precise knows she’ll see someone who was at her last show.

“I think it’s important for people learning about the culture to have a face to put to it,” Precise says. “Our club is the face for their learning journey.”

As an alumna, Precise remains supportive of the current queens of the club.

“In drag, you have families and I’m a drag mom to a bunch of drag babies,” she says.

Precise explains that when someone expresses an interest in drag, there’s a mentor-student relationship, but as the performers grow, the support becomes symbiotic.

“I helped bring in a few queens and while I taught them the basics, we now teach each other things,” Precise says. “We share everything.”

Precise hopes her following continues to grow in order to share her platform and educate everyone on what drag is versus what people think it is. For her, this means booking bigger events like DragCon, which the queen attended in Sept. 2017.

After American Drag Queen and founder of Drag Race RuPaul was quoted in an article with the Guardian, saying that performing in drag was only edgy when cisgendered men did it,  dramatically cutting it down to only men who are biologically male, Precise was eager to discuss how pertinent it is to understand that artforms evolve.

“RuPaul is what a lot of people think of when they hear the word ‘drag.’ Right now, she is marketing to a very heteronormative audience, and is simplifying an artform that doesn’t need  explanation as much as it needs open mindedness,” Precise says.

RuPaul, the creator of DragCon, was an idol for Precise and is considered the most commercially successful drag queen in the United States, having made her ascent to fame in the 1990’s.

How can the face of such a large inclusive community have spoken against such a wide demographic? Precise points to the times.

“RuPaul became relevant in a different world. When she started doing drag, it was primarily cis men,” she says. “It’s not like that now. We have to open up our arms for all our little drag babies.”

The clapback that came from TV personality’s statement was meant with a published apology, an apology that Precise says she is more than happy to accept.

“I forgive RuPaul, because if we constantly stay mad over ignorance, how will we evolve?” Precise asks with sincerity.

A common misconception Precise hopes to break within the community is that the artform is a limited window for participants.

“Anyone can do drag. Everyone should do drag,” she says. “I encourage it.”

Meg is a third-year journalism student from East Islip, NY. When she isn’t helping out behind the library desk, she’s can be found reading or writing in the stacks or buying things she doesn’t need from the Groovy Blueberry.

Thu Nov 1 , 2018
Students in Professor Lisa Phillips’ Feature Writing Class were assigned to profile people at the forefront of change: Liam Neubauer is a Alpha Phi Omega member who loves to do volunteer work and community service, especially during rush week. He hopes he can encourage other students to be as passionate […] 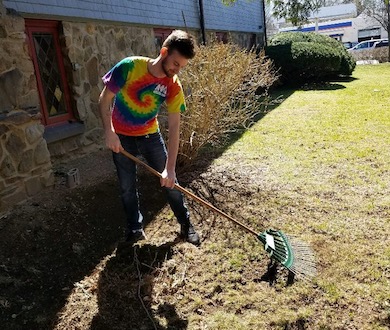