Tradition is at the heart of Grimaldi’s Pizzeria, a new restaurant in New Paltz specializing in coal brick-oven pizzas.

Adam Monteverde, 26, from the Upstate New York area, co-owns the restaurant, which opened its doors on Aug. 2.

The establishment itself is slickly decorated with a small touch of porcelain and a fully stocked liquor bar. A grand piano, sitting lonesome on a slightly elevated stage, is the only remnant of the building’s previous tenants, Toscani’s Restaurant and Piano Bar.

But the large, prominent ovens, slowly exuding heat, provide an inextricable link to the past of the Grimaldi’s name.

The concept and recipe of Grimaldi’s Pizzeria has been around since the 1920s, and has since spread nationwide. “You have hundreds of people waiting on line to taste your pizza,” said Dan Taormina, the general manager of the Grimaldi’s in Douglaston, Queens. “You’re really a part of something special.”

The bottom of the menu reads: “No slices, no reservations, no delivery, no credit cards.” According to Monteverde, “it’s all traditional.” Though the temperamental coal brick-oven is partly the reason for the lack of slices and delivery service, the rules are there mostly to maintain the sense of tradition started by the original Grimaldi’s Pizzeria in Brooklyn, which abides by the same code.

One of the hardest obstacles in opening the business for Monteverde was getting the right people to work for him. “It’s difficult to find the right staff,” said Monteverde, who has been making pizza since he was 12 and spent a year planning this restaurant. Though the costs of opening a business, especially a restaurant, are undoubtedly high, “it wasn’t a tough decision,” said Monteverde. Though he did make note of how expensive rent on Main Street is, they have been doing four times the amount of business they expected.

It’s their cheese that sets them apart.

Monteverde, a graduate of the Culinary Institute of America, said that the cheese differentiates Grimaldi’s, not just from other pizzerias in the area, but from other Grimaldi’s establishments as well. Monteverde prided himself on an artisanal cheese maker he hired, who is also an old acquaintance of his. He comes in during the early morning and makes all the cheese by hand, using local milk harvested from free-range cows.

They are the only Grimaldi’s to make cheese on site.

Monteverde hopes to expand this aspect of the business by being the main cheese supplier to other Grimaldi’s Pizzerias.

But what Monteverde is most excited for is transforming Grimaldi’s Pizzeria into “Grimaldi’s Late,” a dance club, during the late night weekend hours. Though drinks and pizza specials would be an important draw, it’s the music that would, once again, set Grimaldi’s a part from other dance clubs.

“Everyone is a DJ,” said Monteverde, dismissing the idea of a conventional DJ. He plans on getting people from the town to be the DJ for the night, by inviting them to plug their own personal iPods into the main mixer.

It may be a chance for him to start his own traditions.

Fri Oct 1 , 2010
In a culmination of the “Hiroshima Speaks” exhibit held in the Sojourner Truth Library on Sept. 23, Tomiko Morimoto West provided a compelling account of her experiences in Hiroshima on Aug. 6, 1945, the day of the atomic bombing. According to West, her mission is to convey messages about the […] 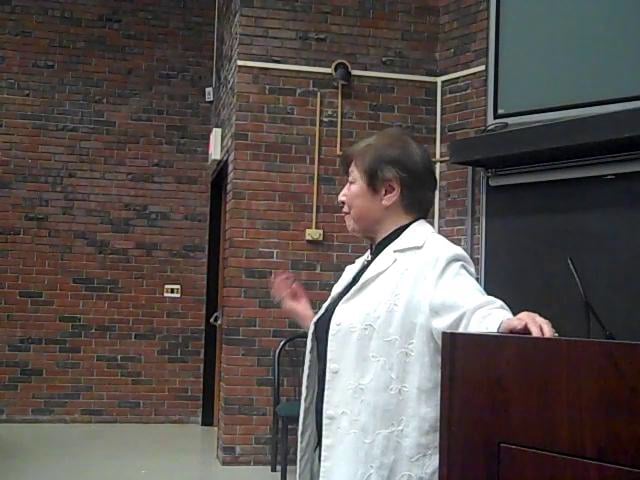