In a culmination of the “Hiroshima Speaks” exhibit held in the Sojourner Truth Library on Sept. 23, Tomiko Morimoto West provided a compelling account of her experiences in Hiroshima on Aug. 6, 1945, the day of the atomic bombing.

According to West, her mission is to convey messages about the innocent casualties of war and help prevent future atrocities.

“We all have to work together towards world peace,” West affirmed. “I’m already 78, so I must depend on you young people. I believe you can do it.”

During the second World War, West was 13 years old and had already sacrificed years of her life to help her nation. She quit school to work in factories to help Japan’s war efforts. After Japan’s attack on Pearl Harbor in December of 1941, their war changed. The United States joined the Allies and immediately targeted Japan. Seeking to put an early end to the fighting, America dropped the world’s first atomic bomb on Hiroshima.

When the B-29 aircraft Enola Gay deployed the world’s first nuclear attack, West was only 2 km from ground zero. She says she was violently catapulted to the ground but survived because she followed the rules of her training. She closed her eyes, pushing on her eyelids as hard as possible, covered her ears and opened her mouth in order to release the internal pressure.

“Suddenly there was a big, bright flash like the morning sun reflecting off the ocean,” West said.

Before the devastation occurred, West was admiring the sight of the B-29 flying overhead. She says that B-29 planes constantly flew over their city, taking pictures and surveying the ground below, so she wasn’t initially concerned. But that soon changed.

“Before I knew it everything started falling. I thought the Americans had made a mistake,” said West.

West began to get choked up as she explained the gray smut and dust that engulfed the city like a virus without an antidote. To escape the plague, West and others fled to a cave carved out of a nearby mountain. From her safe haven, West said she watched the city burn and waited for her family to come.

“Little did I know that my family wasn’t coming because they were hurt… My mother died,” West explained with tears slowly creeping down the sides of her cheeks.

When the destruction seemed to have settled, West continued on her journey to find her family. West surveyed the environment, seeing parents desperately searching for their children, ashes where communities use to reside, schools that had been knocked down and soldiers who were so badly burnt their skin hung from their bones.

“It looked like surgical gloves were hanging from their fingers,” said West.

On West’s expedition to find family, she had to cross over railroad bridges because all other bridges were ruined. West says that as she crossed she would look down at water that was filled with dead bodies.

“You could almost walk over the dead people to get to the other side but to survive you had to learn to cope,” she said.

West says she went to six bomb shelters in search of her relatives until she found her wounded grandparents. Her grandfather had shards of glass lodged into his back and died on Aug. 26, 20 days after the bombing, and West’s grandmother died soon after because of a broken heart, she said. West says she was once again overcome with loneliness and continued on her search for her mother.

“When I found my grandparents I was shocked. When that happens it feels like it’s happening to someone else. Of course I was happy but I had a lot of mixed emotions. I think they were happier than I was because they thought I died,” West said.

According to West, the bomb created gusts of wind that were strong enough to push people for miles. Because of this, West said she knew her mother could be anywhere. She searched for days and days until her mother was found severely burned and buried under a building.

“My challenging life begun from then on because I was the only one left,” said West.

Despite her obvious emotional pain, West remained positive and inspirational. She describes how her nation came together within two or three days to gather wood, metal and any other materials they could scrape up to rebuild their communities. West said they built barracks to provide little shelters for families and children.

“Pain and suffering makes you stronger. You come above it. Even now I feel like I can do anything,” she explained.

Throughout her life, West continued to suffer from the effects of the nuclear radiation. When West first came to America in 1953, she said she had difficulties finding a doctor. She suffered from a radiation-related blood problem with her white T-cells, but West said many doctors refused to look further into the issue. According to West, the radiation also prevented her from conceiving a child.

Despite losing her family and suffering several long-term radiation-related conditions, West remains upbeat and optimistic about the future.

“Throughout my experience I learned to always forget the bad and remember the good. I close my eyes and like an eraser on a chalkboard I erase the bad memories.”

Ms. West, former New Paltz Language Immersion Institute professor, was 13 year old living only 2 km from where the Atomic Bomb destroyed Hiroshima putting an end to WWII. She describes the loss of her family and the feeling of loneliness. The discussion was originally scheduled to take place at the library, but the unexpected crowd forced the meeting to be moved to the lecture center. Stay tuned to the Little Rebellion for further follow up.

Fri Oct 1 , 2010
Weather data collection hasn’t changed much in the last 114 years, although the climate has. Director of Research at Mohonk Preserve Paul C. Huth presented this year’s annual George O’Keefe Memorial Lecture, “A Century of Weather Observation at Mohonk Lake,” held Sept. 21 in the Lecture Center. Huth’s exposition was […] 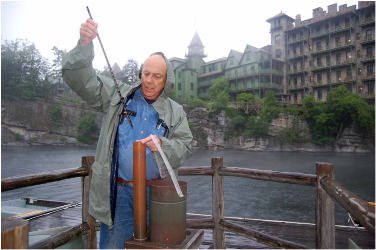