After months of contentious debate over New York Gov. Andrew Cuomo’s proposed budget cuts for the coming fiscal year, Albany lawmakers finally came to an agreement and adopted a final state budget on Thursday, March 31. The plan, which sports a price tag of $132.5 billion, calls for a 2 percent decrease in spending, which, alongside not a single tax increase, is poised to plug the state’s $10 billion spending gap.

In its final form, the state budget outlines sharp cuts in Medicaid, education and state operations. Initially, the governor had intended to cut $1.5 billion from spending on state education, but, amid heated criticism over such a massive cut, Cuomo opted to restore into the budget a modest amount, $230 million. Still, upwards of 18,000 to 20,000 of state teachers and school staff are set to be laid off. The overall job cuts expected to come from the final budget could mark the largest single-year decrease in the New York workforce in over 15 years.

Given the polarizing nature of the budget debate, it’s perhaps little surprise that local political activists remain noticeably divided on the governor’s actions.

“I’m in favor of this budget, given I think it’s about time someone stepped up to do what is difficult,  yet necessary,” said Robin Yess, chairwoman of the Ulster County Republican Committee. “It’s been tough to change the spending mindset, but, unfortunately, it’s now simply unavoidable.”

On the other hand, Guy Kempe, chair of the Mid-Hudson Valley Working Families Party, is not pleased with the governor’s actions here.

“Cuomo has called health care and education ‘special interests’ and he just seems indifferent to the impact of these massive cuts,” said Kempe. “He’s cutting what I regard essential government services during a recession when families are being hit hardest.”

For members of the SUNY community, many of whom had hoped for a Cuomo change-of-heart on his proposed funding cuts, there is perhaps little to celebrate in the final budget. Though the governor restored $60 million in state support to SUNY’s three teaching hospitals, in Brooklyn, Syracuse and Stony Brook, as well as some funding to SUNY and CUNY community colleges, there was no fiscal restoration to SUNY’s state-operated campuses, SUNY New Paltz included. Funding to SUNY shall be cut by $100 million.

Despite polling which suggested widespread popularity for its implementation, the so-called “millionaire’s tax,” which would have extended an income tax hike on the wealthiest New Yorkers, is notably absent from the final budget. This, despite Assembly Speaker Sheldon Silver’s ardent support in favor of extending such a tax, which would have generated twice the revenue of the SUNY cuts included in the final budget. John Bonacic, who represents New Paltz in the State Senate, had spoken in favor of extending a millionaire’s tax.

Jeff Fonda, former vice president of the Student Association at SUNY New Paltz, supported the millionaire’s tax, arguing that, at least in our current environment, tax breaks for the wealthy are ill-advised.

“Tax cuts for the rich made sense during the Reagan years, for instance, because the wealthy were seeking out the best investment and that investment was in America,” said Fonda. “Today, we have the rich still looking for the best investment, but the returns are now looking better in emerging markets like China, so we’re giving the wealthy these tax breaks and they’re now investing their money out of the U.S.”

Opponents of the millionaire’s tax, such as the governor and Republican Senate Leader Dean Skelos, had argued that a tax hike on the wealthy would only drive New York’s spenders, entrepreneurs and job-creators out of the state.

The governor continues to find himself in a bind with the state’s public employee unions. The final budget outlines a $450 million cut in work force spending, but this, according to Cuomo, is dependent upon unions complying with contract negotiations with the governor’s administration. Should they not give up wage and benefit increases, Cuomo says he will have to lay off up to an additional 9,800 state workers.

“I feel as if the public employee unions just aren’t getting the message,” said Rodriguez. “I think the public will always support collective bargaining rights, as they are right now in Wisconsin, but they won’t tolerate contracts that give raises or perks during tough economic times.”

Rodriguez says that if labor fails to give concessions, the governor will have few alternatives but to impose layoffs.

Buried within the budget is a targeted $72 million savings by closing several state prisons. Through a deal struck between Cuomo and the legislature, the governor will have the authority to eliminate upwards of 3,700 prison beds. Communities affected by the prison closings will garner economic development grants to offset any negative impact.

It's a Monster Party!

Fri Apr 8 , 2011
It was a night of larger-than-life sized creatures of mixed media, ambient sounds and experimental music. It was a ‘Monster Party!’ On April 2, 2011, eight local artists came together with a common theme of colossal monsters at the Coffee Shoppe located in Beacon, NY. “This is a Monster Party,” […] 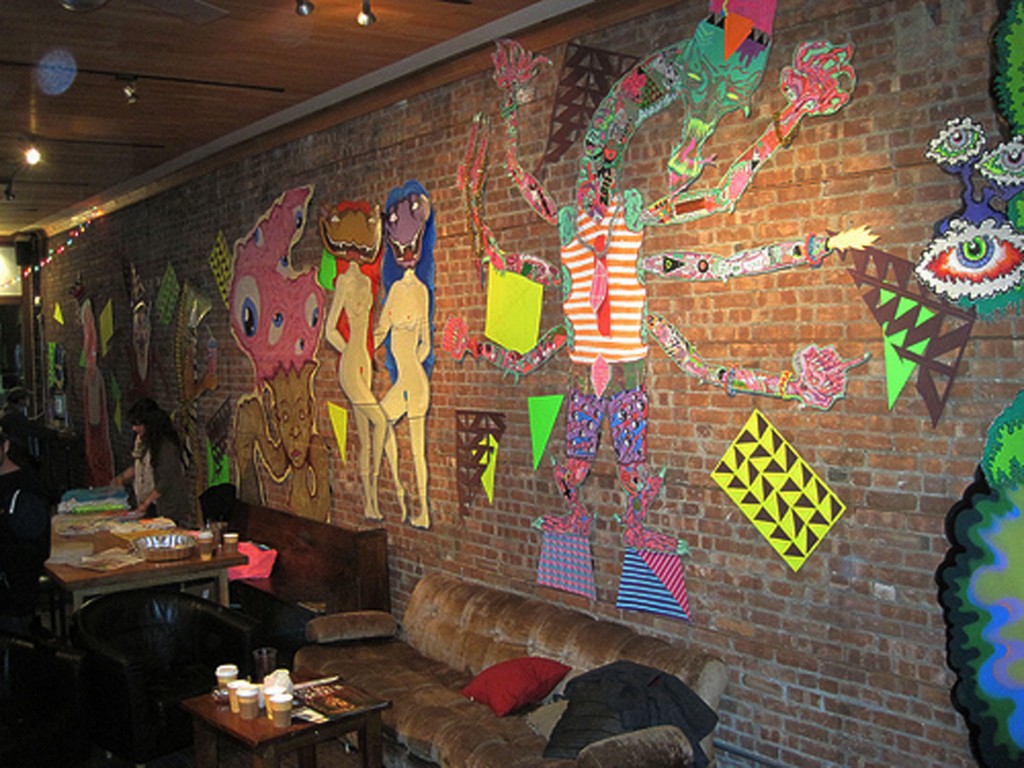