Saturday’s New Paltz Convention was a highly contest-driven gathering of the best gamers in New Paltz. The New Paltz Gaming Society brought their finest to take on students in a multifarious amount of games on nearly every new console and a few classical platforms.

Saturday’s contests were highlighted by the Mario Kart for Wii tournament featuring 16 gamers squaring off in four grand prix tournaments in the first round. Only the top two from each round would move on and drivers with the lowest scores after four races would be eliminated.

Drivers raced across the plains of Moo-Moo Meadows, dodged the dropping blocks and lava of Bowser’s castle and strived to stay on course amidst the psychedelic design of Rainbow Road. They cut across the corners of Delfino Square, and plummeted through the leaves in Maple Treeway.

Luigi, Yoshi, and Rosalina were among the most popular characters used.

The tournament began at 4 p.m. and conflicted with several other tournaments that gamers were competing in. A controversial re-do is the second semi-final round that gave one participant a second chance while potentially scorning the championship round with illegitimacy. In the end, the driver who caused the round to start over was eliminated.

The finals brought with it some of the most competitive action of the day. Yoshi, Toad, Rosalina and Dry Bowser were vying for the championship, the pride and the $10 gift card to Gamestop. Every driver was allowed to choose one race. Fourth-year journalism major Victoria DiStefano won the first two races as Toad, after winning her choice race at the Coconut Mall.

“I was proud to be able to beat some experienced video gamers,” DiStefano said.  “I was surprised that I did so well.”

Micheal Jurek, a fourth-year computer engineering major, who played as Yoshi, won the third race, after finishing second and third in the first two races.

By the final race it was down to DiStefano and Jurek to see who would be crowned the Mario Kart champion of SUNY New Paltz. DiStefano needed a third place finish to win, but was denied by a shell fired at her as she approached the finish line, giving the win to Jurek.

“This isn’t the first [NPC I’ve played in],” Jurek said. “but I haven’t won anything yet and it feels great!”

Both drivers were given their choice of a prize for finishing first and second respectively.

Thu Dec 1 , 2011
A fuzzy, lively group of actors will be performing in SUNY New Paltz’s latest production. “Fat Ram,” a traditional medieval play, is getting a makeover by adding muppet-style puppets acted out by the cast, and is playing in McKenna Theatre from Wednesday Nov. 30 to Sunday Dec. 4. Incorporating puppets was the […] 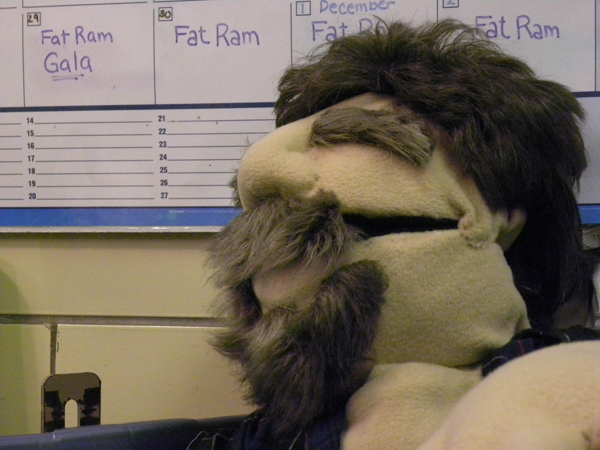