Four hours of work in the Foreign Language Department in the morning, four hours of class in the afternoon, three hours of reading at night. Add on two hours to study French and Arabic, and a possible sorority meeting before bed.

Look hectic? Seem stressful? This is a typical Thursday for Jenna Rowland, a third-year student and global affairs major at George Mason University.

“It’s manageable,” Rowland said. “I really just try to block out my time, but it can become overwhelming on occasions.”

Stress causes many students to feel overwhelmed, moody and sometimes depressed. These feelings can lead to behavioral symptoms like over or under eating and procrastination of school work. Alcohol, cigarette and drug usage are also issues.

According to the Director of Student Health at SUNY New Paltz, Dr. Peter B.T. Haughton, stress causes adrenaline and hormone production to accelerate, which turns on the body’s fight or flight response system.

“Adrenaline and hormones have an effect on neurotransmitters in the brain (norepinephrine, dopamine and serotonin) that stimulate receptors that help you to become more alert and focused,” Haughton said. The receptors cause breathing, heart rate and blood pressure to increase, allowing more oxygen to the brain and one’s senses to become sharper.

So students have a choice, either choose to tackle school work head on or run from it, potentially harming their grades and their chance at a future career. Jenna chooses the first option.

“I haven’t really decided what I want to do yet but I know whatever I do, I want to it right and well,” Rowland said.

To relax, Jenna and her housemates usually watch TV, cook, or just hang out. However, some students take another approach.

“I started smoking during my first year of college,” Adam Gosney said, a third-year student at SUNY New Paltz studying music composition theory. “I already have a slight anxiety disorder and it definitely made me feel more relaxed.”

Smoking actually causes the exact opposite of relaxation. Nicotine is a drug stimulant that creates many of the same sensations as stress. It produces a rapid rush of adrenaline that speeds the heart and increases blood pressure, according to health.gov.

“It wouldn’t hurt if I could become more organized, but I’ve come to expect it. I always get things done and get them done well. I just put it off. It’s never got so bad where it becomes a real issue,” Gosney said.

It is important for students to recognize if they have “situational” stress or an anxiety disorder, Dr. Haughton said. If school work is due and keeps getting pushed off, the stress one feels is usually situational.

“That puts an enormous amount of stress on the body,” Haughton said. “People are going to deviate from their normal sleeping patterns, studying into the wee hours of the night. The brain needs that time to create the fuel it will use to function in the waking hours. One is put at a big disadvantage – the next day you won’t be functioning at your best.”

According to Haughton, since sleep is so important in brain function, students should try to limit their caffeine intake and stay away from drugs. This includes stimulant drugs like Adderall.

Prescribed to those with Attention Deficit Hyperactivity Disorder (ADHD), many students use the drug to help get through long study sessions. Though it may help the brain focus, it represses the appetite and leads to sleep deprivation when taken for the wrong purposes, Haughton said.

“They don’t know if they are predisposed to heart arrhythmias also,” Haughton said. “These stimulants have the effect of causing sensitive nodes that cause abnormal heart rhythm. If you get an abnormal rhythm it could stop your heart, and that’s sudden death.”

Both Rowland and Gosney say they stay away from prescription drugs like Adderall, but they have heard stories about people who have done it.

“Well, I’m pretty sure most of the student body uses some form of recreational drug, anybody that goes here is at least aware of it, even if they don’t do it themselves,” Gosney said.

If all work is done and the stressful feelings are still there, it may be an anxiety disorder. That’s the time to visit the Student Health or Psychological Counseling Centers so it can be treated.

“We will do everything in our power to help students be successful,” Haughton said.

Too much stress causes an excess production of adrenaline, steroids and hormones, which over time can break down the body’s organs and suppress the immune system, Haughton said. Studies also show over-production of steroids can harm the prefrontal cortex of the brain, harming short-term memory and possibly leading to dementia later in life.

“What’s important is for students to realize why they are here, to get an education.” Haughton recommends the best ways to reduce stress are by getting a good night’s rest every night, taking study breaks, monitoring your diet and alcohol consumption and (like Jenna) remaining organized.

“You can’t let others set your agenda,” Haughton said. “You have to know what you want out of life and work hard to attain it, without letting other people derail you from your goals.”

Why Twitter is the Bomb and How to Join the Club

Thu Dec 3 , 2009
Have you heard about Twitter? If not, I hope you are either a) a 2-year-old who wouldn’t be able to read this column anyway or b) have been in a coma for the past 18 months. If you’re in any way involved in the communication/media world and haven’t given in […] 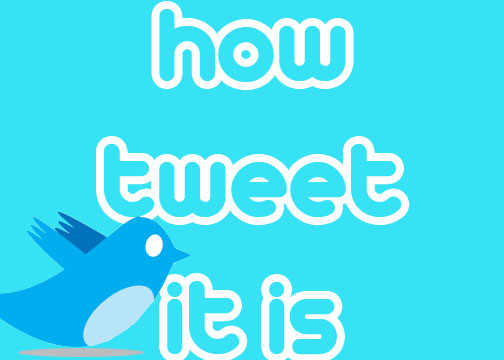