The 10 percent reduction in state funding to the SUNY system in Gov. Cuomo’s state budget has sent a ripple throughout SUNY schools, particularly SUNY New Paltz. It has led to student walk-outs and a teach-in, as well as a state wide student protest in Albany on March 15. One possible solution to the SUNY funding cuts is a bill that was introduced by former Gov. David Paterson last January, known as the Public Higher Education and Empowerment Act (PHEEIA), or the SUNY Empowerment Act. It was voted down by the New York State legislature in last year’s budget, but it could become a hot issue again.

According to the SUNY website, PHEEIA would allow each SUNY board to set their own tuition rates no more than 2.5 times the rolling five-year average of the Higher Education Price Index, which calculates the average cost of staff salaries, maintenance, library books and other expenses. The boards would also be allowed to set different tuition rates for academic programs and campuses throughout the state.

As of now, the SUNY tuition is equal for all campuses, except The University of Buffalo, which is $4970 per semester , and is set by the state legislature.

On March 2, the legislature passed a bill titled “UB 2020,” that allows Buffalo to set its own tuition and different fees for different programs. The advocates of PHEEIA hope that a larger bill can be passed in the near future.

On SupportNewPaltz.com, SUNY New Paltz Interim President Donald Christian urges students and faculty to contact government leaders regarding the budget cuts. He believes the major issue that should be addressed is “increased tuition along with a rational tuition policy.”

SUNY Chancellor Nancy Zimpher has gone on record saying she believes that PHEEIA would give an economic boost to the SUNY system, and the rest of New York.

“This act would essentially privatize the SUNY system,” Dambirck said. “It (PHEEIA) would create a situation where schools could extract larger money in tuition, and prevent local residents from attending SUNY New Paltz, for example.”

“Families rely on SUNY to provide not only a quality college education, but also one that is relatively affordable,” Bonacic said. “Letting each campus set its own tuition could lead to higher tuition each year. I view a higher cost as an added tax on middle-income New Yorkers.”

“Overall, the SUNY Empowerment Act would allow the SUNY system the ability to raise tuition at a rate that could possibly outpace the ability for students to meet tuition demands,” Long said.

Mon Mar 14 , 2011
Quick video reporting on people’s plans for spring breaks, if they have homework, and their favorite memories from previous Spring Breaks. Produced by Alex Vignogna 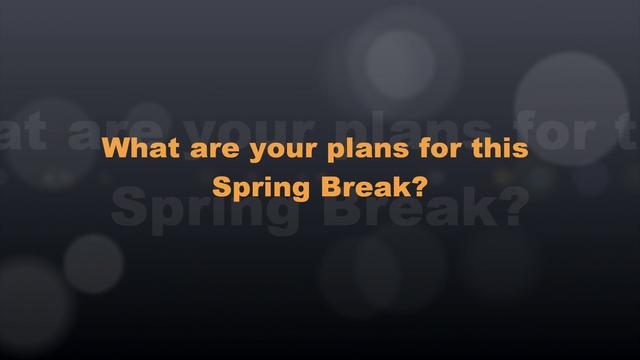