Have you heard about Twitter? If not, I hope you are either a) a 2-year-old who wouldn’t be able to read this column anyway or b) have been in a coma for the past 18 months. If you’re in any way involved in the communication/media world and haven’t given in to the mesmerizing aura of Twitter and made an experimental account to see what it’s all about, you haven’t lived. However, if you’re that person who jumps headfirst into any new social media phenomenon that hits the globe and have had an active Twitter since day one so that you can inform your small group of followers about what you’re eating for breakfast or what you were thinking about as you sat in traffic for an hour, please stop tweeting and assume the role of silent observer.

Do you have a blog that you treat like a very public diary? If it keeps you sane, keep on truckin’ with it—but if you want to become a legit part of the blogosphere, you’ve got to step it up a notch. Here’s some advice, straight from the mouth of an amateur but glorified-in-her-own-mind social media extraordinaire.

Let’s start with a confession. I have a Twitter account and I did create it earlier this year to see what the hype was all about. I used it to expedite my daily online news reading by following CNN, The New York Times, local news affiliates and newspapers, but I was hesitant to tweet myself—I had about three followers and didn’t think they’d care to know that I broke yet another umbrella that day or felt extremely fat from skipping the gym. I did follow Miley Cyrus and check in hourly to see what she was doing and catch her frequent twitpics. I did try my hardest to get Diddy to respond to me and I did tweet once or twice about how I wanted to launch myself out the window at Oracle production night. I even stooped so low as to tweet from Happy Hour about how ecstatic I was that they played three Michael Jackson songs in a row.

But I soon learned that Twitter is most useful when used to relay relevant information to a solid base of followers. I don’t mean retweeting the latest headlines or Rev Run’s quotes; I mean if you pinpoint a niche area that people will follow you to hear about and loyally interact with you over, that is where Twitter’s true value lies. Take a look at how Twitter and/or blogging fits right into the rapidly evolving media landscape, when used appropriately.

To get to Twitter, we have to start with where it all began—blogs. I cover the Buffalo Bills for a football Web site that’s written completely by females: chicksinthehuddle.com. Its mission is to provide quality football coverage with a snarky twist—what could be better than reading a game analysis that’s riddled with information but also makes you laugh? I write, edit and post all my own content. This made me familiar with basic web servers, which in turn has made me more attractive in job interviews because potential employers want young people who intimately understand the web, can write for it and can navigate it for them. This also opened doors and got me a little further in the blogosphere because Huffington Post caught whiff of chicksinthehuddle.com and allows us to cross-publish our articles on their site. My words are being seen by dozens of people on one site and thousands of people on another. Whether blogging is something you want to make your career or something you want to do on the side, latching onto a small startup and waiting it out until you can move up the ladder is how to do it. Now, onto what has taken over my life: Twitter.

Twitter is most applicable when you have something to say. The way I “found my voice” on Twitter and gained an ever-growing herd of followers (currently 143 once I deleted all the spambots) was by promoting the writing I was doing for the blogs. Now I communicate on a regular basis with Bills players, former Bills, the family of former Bills, Bills fans and members of the sports media and my local media. I tweet links to all my posts and loyal fans retweet them, so that exposes my work to more people. I know that sports writers and Bills players read my posts and the best vindication that my hard work has paid off is when the people you’re reporting on (and in the case of football, idolize) read what you’ve written and give you a pat on the back. So, while I’m on the end of Twitter that should be tweeting nonstop, many of my followers are on the opposite end and use their account to observe what I’m doing and occasionally interact with me over it. They help me and essentially, I help them.

I urge aspiring journalists and anybody who wants to be part of the media to check out Twitter for its professional value (many employers want people who can post Twitter updates and interact with the public). But, if you’re just going to use it as a way to “LOL” at inside jokes with your friends or to make a fool of yourself by hitting on your favorite rapper or basketball player, stick to Facebook.

Contrary to what many people think, the two are not interchangeable. Just like Facebook’s greatest value tends to be on a social level, Twitter works best on a more professional one.

So there you have it. A few hundred words too many about how two of the digital arena’s biggest crazes can actually be useful when used correctly. I hope I’ve informed, perhaps I’ve inspired, and at the very least, I’d like to think I entertained.

Thu Dec 3 , 2009
Some wait until they are at a traffic light or stop sign.  Some only do it when they know it’s for something important. Others are trying to cut down. The frightening reality is that the majority of college students are guilty of texting while driving. “I almost got into a […] 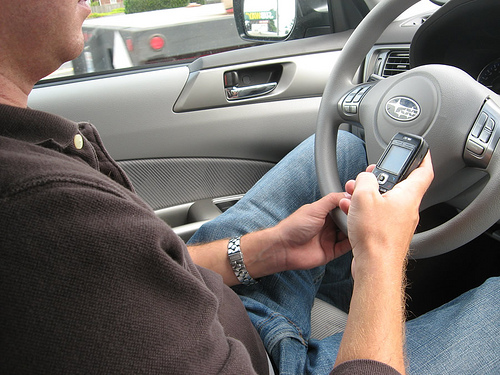