The State University of New York at New Paltz men’s and women’s cross country teams finished a historic fall with some great individual performances throughout championship season, culminating in a program-best finish on the women’s side at the conference and regional meet, while also seeing three individuals qualify for the NCAA National Championship meet—the most in program history as well.

In their first season at the helm of the program, Ryan guided the SUNY New Paltz women’s team to a second-place team finish at the State University of New York Athletic Conference (SUNYAC) meet; the highest standing in program history. They then oversaw the Hawks earning ninth at the NCAA Division III Atlantic Regional meet, also a program-best, while coaching three individual national qualifiers—the most ever.

Senior Emily Cavanagh highlighted a tremendous season for SUNY New Paltz, solidifying herself as one of the best runners to ever suit up for the Hawks. She earned First-Team All-SUNYAC after running an impressive 6K at the SUNYAC Championships with a time of 23 minutes, 4 seconds to place third overall. In addition, she earned her second-straight All-Region honor and qualified for her second consecutive nationals race after running a time of 22:36.7 to earn 16th overall at regionals.

Junior Cassandra Williams also had a career season, running her way to a First-Team All-SUNYAC honor after clocking in with a time of 23:15 to place fourth at the SUNYAC Championship meet. With her second-straight top-10 standing at SUNYAC’s, Williams claimed a spot in the SUNYAC Hall of Fame. At regionals, Williams placed 16th overall, finishing in 23:05.6 to solidify a coveted spot at nationals. While at her first national championship race, she placed 225th after crossing in 23:52.1. Williams excelled in the classroom as well, as she earned her second consecutive Elite 20 Award for her athletic and academic standing.

After just missing out on All-SUNYAC selection during her Rookie of the Year campaign, SUNY New Paltz sophomore Clara Flores-Reininger solidified a Second-Team All-SUNYAC selection after placing 10th overall with a time of 23:49.7 at her second-career SUNYAC meet. Flores then helped the Hawks to a historic regional standing after placing 62nd overall at regionals, finishing with a time of 24:07.4.

Senior Vanessa Morgan had a career final season for SUNY New Paltz, solidifying the Hawks’ top-four runners to add depth the team needed to place second at SUNYAC’s and ninth at regionals. She claimed her first All-SUNYAC honor after placing 14th overall (24:11.6) at the conference meet to get a spot on the third team. She then capped off her senior season by placing 71st overall with a time of 25:28.4 at regionals.

Representing the men’s cross country team, Hawks senior Matt Whitworth earned All-Region recognition on his way to becoming the first men’s national qualifier in program history this past fall. Whitworth finished 16th overall with a time of 25:42.9 at the NCAA Regional meet to solidify his spot at nationals. At the NCAA Championships to conclude his senior season, Whitworth placed 202nd with a time of 26:07.4.

SUNY New Paltz sophomore Conor Van Riper was a breakout runner this past fall, earning Third-Team All-SUNYAC, as well as an All-Region.

Van Riper was the first Hawks male runner to cross the finish line at the SUNYAC Championship meet, placing 15th overall to land on the All-SUNYAC team, while also helping SUNY New Paltz to a fifth place overall standing. Van Riper went out to earn All-Region recognition and did just that in Canton, NY Nov. 16 after placing 33rd overall after clocking in at 26:03.7.

To read the original story, click on the link! https://nphawks.com/news/2019/12/9/mens-cross-country-suny-new-paltz-cross-country-earns-five-all-sunyac-honorees-four-all-region-recipients-and-sunyac-coach-of-the-year-for-ryan.aspx

Working for the Weekend

Mon Dec 9 , 2019
By Melissa Carinha Tiffany Claud, 22, is one of the hundreds of students who have to balance work, school and a social life. Just when Claud thought she had enough on her plate, she discovered her mother was diagnosed with stage one breast cancer.  Claud is interning at the SUNY […] 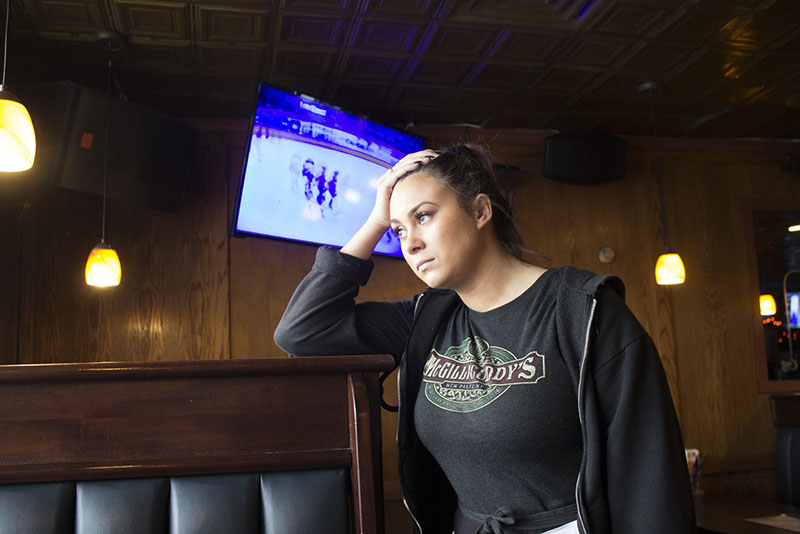