With two weeks of hype leading up to Super Bowl XLVI, it seemed it would be difficult for the game to live up to its own expectations.

Super Bowl XLVI was the latest chapter in the Giants-Patriots saga, and concluded the same way the past two meetings did. With the Giants trailing in the final minutes of the fourth quarter, the ball was once again in Eli Manning’s hands. What has now become typical Eli fashion, the little brother delivered when it mattered most.

There was an eventful 59 minutes of football prior to that winning touchdown by Bradshaw.

The Giants had moved the ball well all game, but struggled to finish off drives. Manning hit wide receiver Victor Cruz for a 2-yard touchdown pass with 3:29 remaining in the first quarter, but following that were only able to muster up two field goals.

The Patriots on the other hand, started the game off slow. Their first play from scrimmage resulted in a safety, when Justin Tuck provided pressure on quaterback Tom Brady which forced him to throw it away, for an intentional grounding in the end zone. It was a sign of things to come for Tuck, who recorded two sacks on Brady, the same as he did back in Super Bowl XLII.

Brady and his bunch got it together late in the first half. However, he completed 16 straight passes spanning over two-touchdown drives, in what was typical Tom Brady fashion. The Patriots led 17-9, and seemed to grab the momentum.

The magic seemed to be with the Giants though. It was almost scripted in their favor. They fumbled the ball on the ground three different times, but did not turn it over once. On the opening drive, Cruz was stripped inside the Patriot 10-yard line, and the ball was recovered by the Patriots. The boys from New England had 12 men on the field though, a penalty which gave the ball back to the Giants. Ahmad Bradshaw and Hakeem Nicks both had butterfingers in the second half, but the ball seemed to find its way into the arms of a Giant, preventing what could have been two costly turnovers.

And then there were the two “drops” by the Patriots receivers. Late in the fourth, on a second and long from inside the Giants territory, Brady threw a ball just behind a wide open Wes Welker, who couldn’t hold on to it. On the final drive, Brady tried to hit Deon Branch over the middle but safety Kenny Phillips got just enough of his hands on it to disrupt the pass.

And just like the David Tyree catch four years ago where he miraculously stuck the Eli Manning pass to his helmet, there was a new wide receiver hero in this contest. On the first play of the game-winning drive was a play that will never be forgotten by Giant fans. Eli dropped back and looked off the safety just enough, to drop a 38-yard pass into the hands of Mario Manningham along the sideline. Manningham gracefully kept both of his toes in bounds and made a clean catch. And at that moment, for the rest of that drive, you had that feeling that they would get in the end zone. And sure enough, they did.

That’s the way it had to end. The theme all year preached by head coach Tom Coughlin was to finish. Finish every quarter, every play, and every game. The message was the same when they were 7-7, and for each game during their six game winning streak to end their season.

Eli Manning’s seventh fourth-quarter comeback of the season finished Super Bowl XLVI, and the Giants wouldn’t have had it any other way.

Thu Feb 16 , 2012
The SUNY New Paltz Solar Car Research Team is hoping to make history this year by designing a solar car that would make break speed records and make it into the Guinness Book of World Records. The three-student team, one of the Society for Industrial and Applied Mathematics’  research projects, […] 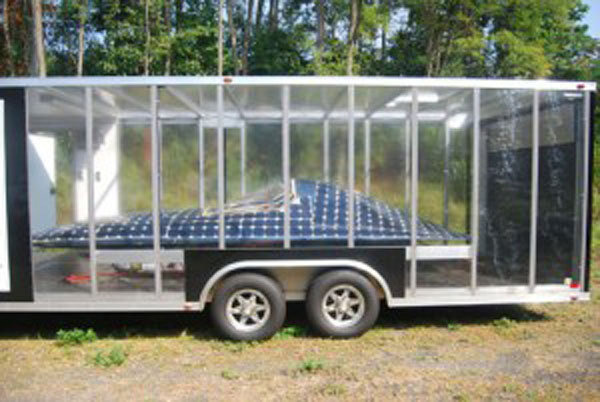