The Hawks (1-0 overall) had career days from their senior class and their experience and veteran leadership helped hold off a tough Tigers (0-1) team on their home court to collect a season opening, 83-80 win.

“I would have loved to see them play another great half and win [handily], but RIT is too good and too well coached to just go away,” said SUNY New Paltz coach Jamie Seward. “And the way it played out was probably better for us in the long run to have to dig in and overcome that momentum swing and get a win on the road against a nationally ranked team and a top-shelf program that RIT is.”

Seniors Marion Dietz, Paige Niemeyer, Philesha Teape and Maddie Van Pelt all earned the start for the Hawks. Dietz and Niemeyer put up career-high’s, finishing with 29 and 21 points, respectively, while Teape registered her first double-double of her career after recording 10 points and 12 rebounds — eight of which were on the offensive glass. Van Pelt, meanwhile, saw 26 minutes of action and recorded 12 points, four rebounds and three steals with just two practices under her belt coming off a playoff run with SUNY New Paltz’s women’s volleyball team. All four were crucial in the win, combining for 72 of the Hawks’ 83 points.

“Those four seniors are as experienced as just about anyone in the country,” Seward said. “I think that definitely was a big factor after RIT made their run. They never panicked, and made some plays on both ends to finish it off.”

Following a made 3-pointer by Dietz to open up the game, the Tigers answered with a 6-0 run to gain their first lead of the game. SUNY New Paltz slowly gained momentum and was given a spark off the bench by Lexi Van Vorst, who subbed in for her first collegiate action. The freshman knocked down 2-of-3 from 3-point range in early minutes and helped SUNY New Paltz get back in front, facilitating an 8-0 run.

RIT climbed back with a run of its own, capped off with a transition bucket with four minutes left. The lead didn’t last long, however, as the Hawks earned a stop on the next defensive possession with Maddie Gillis pulling down the board and quickly pushing the ball up the floor to Van Pelt who pulled up and knocked down a jumper to put her team ahead, 18-17. RIT tied the game with a long 3-pointer at the buzzer by Brooke Stanley, but SUNY New Paltz came out with all the momentum in the following 15-minute period.

Niemeyer opened up a commanding quarter for the Hawks with five consecutive points. Niemeyer and Teape then caused a turnover with a jump ball on the other end, leading to a Dietz 3. After another defensive stop, Teape came through with back-to-back offensive boards, which led to an and-one for Niemeyer, who attacked the basket, getting the bucket to go and the foul. The three-point play pushed the Hawks lead to 38-17 with about four minutes left in the half. Van Pelt then gave SUNY New Paltz its largest lead of the game, snatching an offensive rebound off a missed shot by Dietz, going up to finish the put-back with 21 seconds left to give the Hawks a 51-34 advantage at halftime.

The Tigers owned the third quarter of action and slowly erased SUNY New Paltz’s double-digit lead. RIT out-scored the Hawks, 23-11 in the third, with SUNY New Paltz shooting just 18.8 percent, making just three baskets, while committing six of its 18 turnovers in the quarter.

However, despite the lackluster period, the Hawks never relinquished their advantage. Niemeyer was a big part of that, ending what was a 5-0 RIT run, staying aggressive and earning a trip to the foul line with less than a minute to go. After making both attempts she pushed her team ahead, 62-54. The Tigers responded with a corner 3 by Alyssa Juergens to cut the score, 62-57 going into the fourth.

“I thought we really played with supreme confidence and the aggression that stems from that confidence in the first half,” Seward said. “In the third quarter we got a bit passive. We didn’t attack the glass nearly as aggressively and I think that had an impact on our shooting, because when we missed in the first half we were going to get in on the glass. That really allows you to shoot with a totally free conscience.”

RIT took the momentum into the fourth and got as close as one, but again Niemeyer was there to breakup any thoughts of RIT re-gaining the lead. Ziogas found Niemeyer open in the corner, and the senior knocked down her shot from behind the arc to put SUNY New Paltz up, 67-63.

The Tigers threatened the advantage once more with just more than two minutes left. Coming off a screen, Stanley quickly got off a 3-pointer that swished through and sliced the deficit, 67-63. On the ensuing possession, Dietz made sure to get to the hoop, cutting through into the paint and earned a trip to the foul line. She made both to re-up the Hawks’ cushion to four.

Teape added two more to SUNY New Paltz’s lead after making a pair of free throws a couple plays later. Following a made bucket by RIT, Teape found Gillis on the ensuing possession for 3. The freshman knocked down the attempt for a key basket that extended the cushion 78-71 with 1:17 left.

The Tigers answered with a basket, but with time winding down they were forced to foul to slow down the clock. The Hawks made sure to get the ball in the hands of Niemeyer who was clutch all night from the charity stripe, knocking down 9-for-11 in the game, including 5-of-6 in the final 50 seconds to ice the win.

SUNY New Paltz finished the night shooting just more than 42 percent from the field, including 32 percent (9-of-28) from 3-point range. They owned a slight advantage on the glass, 37-36, but dominated on the offensive boards, 15-10.

The Hawks are back in action next weekend when they compete in the Tufts Tournament, taking on MIT and the hosting Jumbos Friday and Saturday, respectively.

Mon Nov 11 , 2019
By Monica D’Ippolito New Paltz, NY – For the first time in four years, the State University of New York at New Paltz men’s basketball team secured a season-opening win, as the Hawks had an impressive performance to kick off their 2019-2020 season, earning a 90-79 win over Baruch Saturday […] 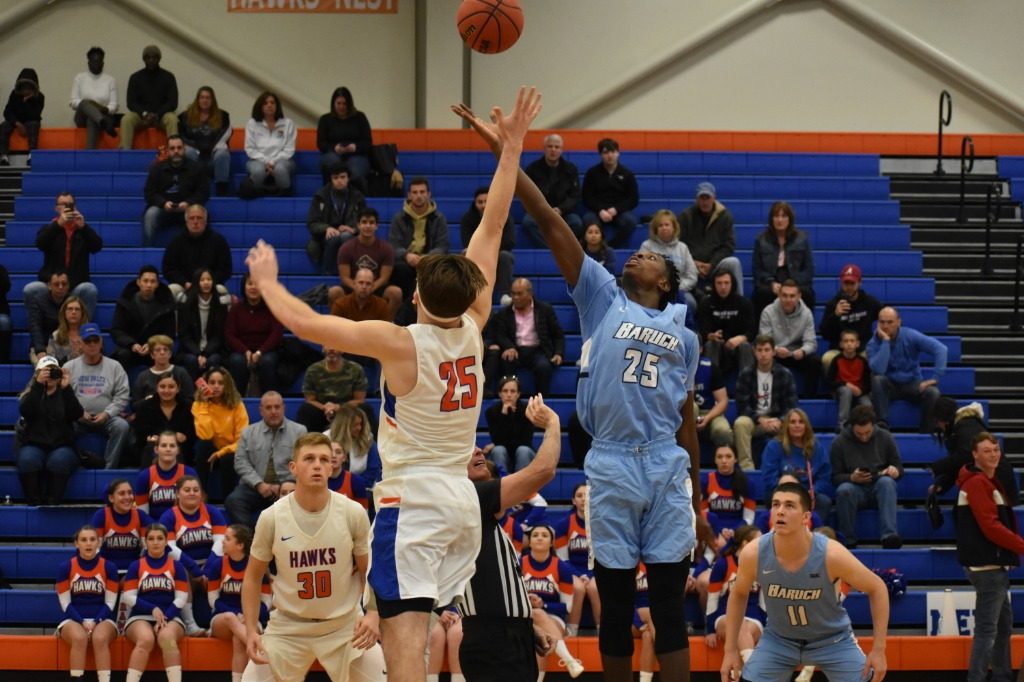