Joel Milian was in his first semester at SUNY New Paltz when he encountered his first obstacle as a college student: his calculus professor.

“He was extremely old and he basically only taught himself,” said Milian, 18. “He would never answer any of our questions.”

Milian is not the only college student to find himself learning less than he expected, but where to place the blame is unclear. A 2005-07 study of 2,300 undergraduates found 45 percent showed little improvement in the areas of critical thinking, complex reasoning and writing by the end of their sophomore years. The findings of the study are cited in “Academically Adrift: Limited Learning on College Campuses,” by sociologists Richard Arum of New York University and Josipa Roksa of the University of Virginia.

“You could very well go to college and not get anything out of it,” said Miriam Ward, a first-year student double majoring in digital media production and history. “It really depends on the student.”

“Some people get through college doing minimal work. It depends on if you apply yourself,” he said. “Also, it depends on the teachers.”

The study does call professors into question, finding that half the students during their prior semester did not take a single class requiring 20 pages of writing a week, and one-third did not take any courses requiring 40 pages of reading per week.

“I question studies that say … students aren’t learning,” said Dr. Patricia Sullivan, a professor of communication and media at SUNY New Paltz. “I question, in our time, with media influences and other factors, whether they’re learning differently and whether we’re actually realizing it.”

But if students are learning differently these days, and professors fail to realize it, they’re still not learning, right?

“I think that it’s easy to go to college and get by without learning anything,” commented Max Singer, a first-year student majoring in theater performance and history at SUNY New Paltz. “I know I’m taking classes now that I’m actually getting zero out of. You can challenge yourself or you can take all these easy classes, for an easy A or whatever. That’s the motto in college.”

And apparently in high school, too.

“High school does a terrible job preparing kids to go to college,” said Kelly Brennan, a first-year undecided SUNY New Paltz student. “In high school we were taught to pass big tests like the Regents while ignoring the SATs. Not like the SATs really help prepare you for college either.”

“It’s rough for them,” he said. “They should have the ability to do basic freshman work.”

Peter Mulligan, a third-year adolescence education major with a concentration in history, said he’s always done “a combination of studying alone and with people” because studying with others allows for “a spread of ideas” while he studies alone to internalize the material.

Research showed social engagement hinders achievement, claiming that students who spent less time with friends and participating in social activities were more likely to do better in school.

Jericho King, a first-year undecided major, had a different perspective on what’s important to the college experience: “It’s provided me with the opportunity to be in social situations in which I flourish.”

Asked if he thought college was good preparation for the real world, King replied, “No.”

Nevertheless, the “real world” awaits all of these college students whether they learn something or not. Research has found that one year after college graduation, many students were far from where they had hoped to be: one-third moved back home and 10 percent were unemployed.

Still, the students of SUNY New Paltz seemed to have hope.

Thu Aug 30 , 2012
Signs that read “Don’t Frack With Our Water” rest along the sides of Lecture Center 100 Monday night for a screening of the movie “Dirty Business,” produced by Peter Bull. Sponsored by the New York Public Interest Research Group (NYPIRG), the focus was to bring attention to “the price we […] 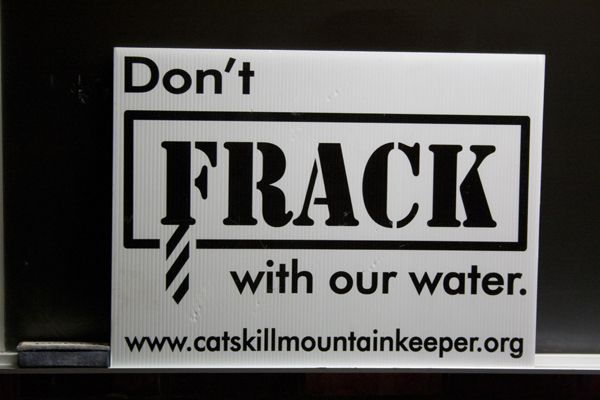