He sat down at the bar and ordered a pint. Removing his gloves, he turned and nodded at his pals.

“You seen any of my brothers?”

“Not since yesterday,” replied the bartender, serving him his Budweiser. “But it’s not even noon so I expect them soon enough.”

Chuckling, he buried his mouth in the froth, the beer warming the bitter cold that still lingered on his lips.

“They cancel school today?” he asked.

“Nah, two-hour delay,” answered the bartender. “Have you seen your girls?”

“That’s a shame. You need anything else?”

He ordered another pint and then joined his pals for a few rounds of pool. Several victories later he approached the bar, bumping into the jukebox on his way. He used his winnings to pay his tab and then struggled to button his dull brown jacket.

[Eileen’s mother, Barbara, went into labor at a local bar. She delivered Eileen at the hospital, but raised her in the bar, which provided her with more maraschino cherries than should be eaten in an entire lifetime. When she was seven, she told a man sitting on a stool that she was a midget and lied about her age. He laughed so hard that cigarette smoke erupted from his nose, like a monster, or maybe a bull.]

And he walked. He walked the 4.2 miles down Springtown Road with his jacket buttoned to his chin and his hands buried deep in his pockets. Cars passed. Cows glanced up as he walked by the fields. Finally, he arrived at his ex-girlfriend’s house-against court orders.

The front door was locked. Angry, he kicked it once, twice, three times. The wood splintered and the hinges tore loose.

His heavy steps climbing the stairs alerted her. She grabbed the phone and hid in the closet.

She heard a crash. He had thrown the stereo system against a wall.

“Oh, God, he’s gonna kill me,” she said into the phone. “You have to hurry.” She was crying. She was praying. She was hoping he would notice the dog was missing and assume she had taken it for a walk.

“The police will be there any minute, ma’am. Just be silent and stay on the line.”

He left before the police arrived. Three days later, he would be arrested at the same bar he had visited that day, claiming he didn’t remember a thing.

[“Oh my gosh Daddy! I beat your pinball score! Can I get that gumball now?”

Eileen jumps up and down, proud and eager for her prize. She climbs onto a stool to tell everyone what she’s finally accomplished. No one seems to hear her. The bartender brings her crayons. A friend of her father’s is trying to show her dirty pictures, “Educational material,” he claims. Her father laughs while her mother puffs on her cigarette, telling them to stop before she exhales.]

He walked into the courtroom with his hands cuffed in front of him. The bailiff told him to sit down. From his seat he could see his daughters. Eileen, eight and the oldest of the girls, was sitting at the end of the row with seven year old Marie sitting beside her. The two youngest, Ann, five, and Nicole, four, were sitting with their mother coloring. He mouthed, “I love you,” and turned away.

Marie looked up at her older sister. “He just said something. What did he say?”

Marie looked at their father again. “Why is he wearing that orange suit?”

“I don’t know. Because he’s supposed to.”

Their mother interrupted, “I told you girls to be quiet. Don’t embarrass me.”

The two sisters looked at each other and then at the floor. The police chief walked over to them and said something to their mother.

“Stay here with your sisters,” she told Eileen. “Don’t move.”

The girls watched their mother go to the front of the courtroom. She was speaking to the judge. Both attorneys were at her side.

“What are they talking about?” Marie asked.

“I don’t know. I can’t hear anything.” Eileen turned toward her two youngest sisters who were now fighting. “Ann, Nicole, be quiet,” she scolded.

“Ann said she would trade me her lollipop for my Starburst, but now she won’t give it to me!”

“You’re gonna get us in trouble. Stop it!”

“But she stole my Starburst!” Nicole started to cry.

A woman who the girls did not recognize came over and sat down next to them. She played quietly with the two younger sisters until their mother returned.

“OK. We can go home now.” She was smiling at her daughters.

“Can we go say goodbye to Daddy?” Marie asked.

Their mother hugged the strange woman and gathered their jackets. The girls looked at their father, who was being led away. He waved with both cuffed hands.

He never saw his daughters again.

[Eileen watched her father go to prison this morning and she’s watching her mother celebrate tonight. In a black-and-green-striped mini-dress, her mother almost looks like a bumble bee. Her hair is freshly bleached. Eileen bleached it herself. Someone she knows by face, but not by name, is giving her and her sisters some quarters. The four of them race over to the jukebox.

“Eileen!” Her mother gives her a stern look. “Don’t make a scene.” Eileen surrenders and returns to her cup of cherries. ]

After 12 years in prison, he finally gets a home-cooked holiday. Standing in his brother’s kitchen, he learns about his eldest daughter from the pictures that decorate the fridge. There she is with Marie, taken at Thanksgiving nearly a decade before. He admires her prom dress in one and watches her graduate from high school in another. He points to a more recent photo, “She cut off all her hair?” He sounds disappointed.

“Yeah, she donated it to Locks of Love. Said she needed a change. It’s grown out a little now.”

His nephews came running into the kitchen screaming for Grandpa and Uncle Greg to join them in the living room. It’s time to light the fireplace.

[Eileen drops her half- brother’s name at the door and the bouncer lets her in-the only bar in town where the remaining men in her family are still allowed. Her friend’s band is playing tonight. She’s glad she didn’t have to pay to listen to such crap. At the bar, she orders a Captain and Coke and turns around. The jukebox is still there. She mingles a while, but decides she doesn’t really want to be there. Trying to push through the crowd, a fight breaks out in front of her. She makes it to the door, though not before noticing blood on the floor.]

He’s sitting next to his grown nephew, Henry, trying to make idle conversation. “Happy Thanksgiving,” he says, “And, hey, congratulations on the new baby-she’s beautiful.”

“Thanks, man. Happy Thanksgiving to you, too.” Henry doesn’t make eye contact.

Henry takes a sip of his beer. “So what are you doing now? Working or anything?”

“No, I can’t really work because of the throat cancer. But I’m living in a group house-condition of my parole.”

“It’s been OK. Food’s not bad-and the meetings aren’t as much of a pain as I thought they would be.”

A few minutes later, he is sitting alone. His brother walks over.

“Why? Did you tell her I like Scrabble too? ”

“Greg, she didn’t really say anything, only that she had decided not to come.”

A moment of silence passes. He looks up at his brother. “Well,” he chuckles, “there’s always Christmas…”

[Eileen opens his letter, still strangely familiar with his handwriting after all these years. He tells her how much he loves her, how much he worries about her, and how proud he is of all her accomplishments. He confesses that it breaks his heart that they are strangers and claims that it is not his fault.

Although he apologizes for his mistakes, he denies his actions on that cold, bitter day-but she remembers the police pulling her out of her classroom at school. She remembers the splintered wood, the broken glass and the lack of sound coming from their only radio.

She doesn’t want to trace the blame. She resents that life has made her older than she is and wonders if things will ever change. She closes his letter and hides it in the back of her closet. She hasn’t read it again and probably won’t.]

Thu Mar 26 , 2009
It’s difficult to open a business in today’s economy. In a time when many are cutting back on extra spending, it’s especially hard to open a restaurant and even more so in a college town. One New Paltz eatery, however, is thriving. Rock Da Pasta opened its doors last January […] 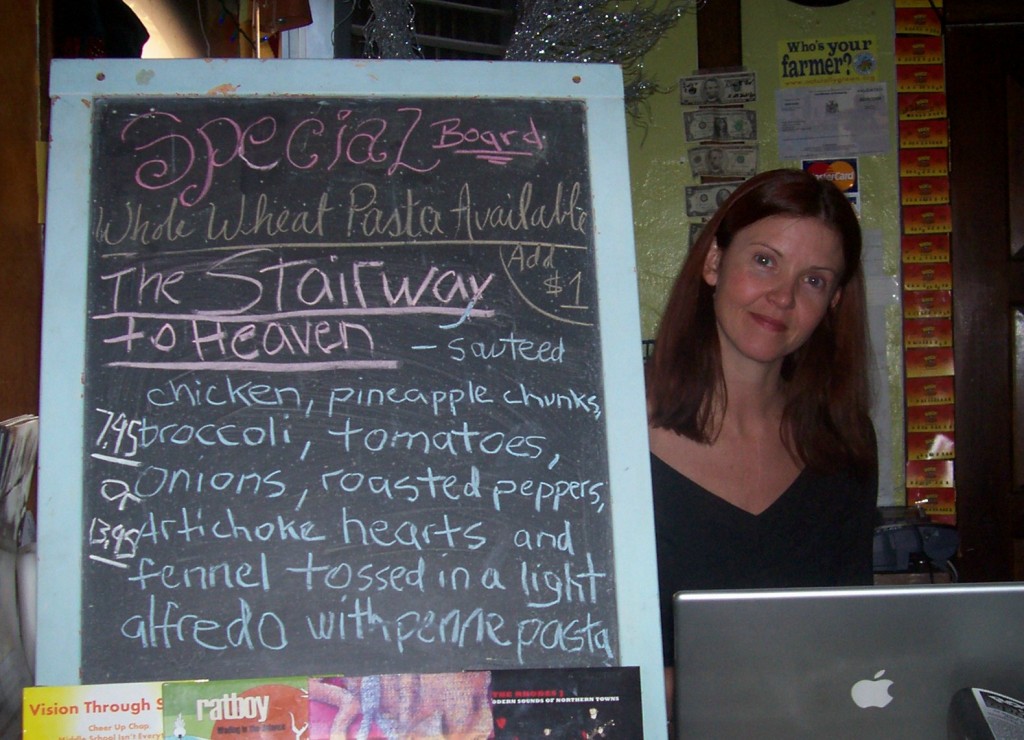