September 17 – Occupy Wall St. begins in New York City’s Zuccotti Park. Mass media coverage, and the proliferation of social media based demonstrations allow for a presence strong enough to successfully “occupy” the park. Occupy movements spring up throughout the country, and parts of the world.

Month of October – As a resident journalist who actually reads, I spend the month answering the question, “what is this Occupy Wall Street thing?”

Best answer after multiple instances of offending people and saying too much:

“I don’t know, I think it’s kinda cool because for the first time people who have tried the legal avenues and traditional means of protest are fed up with either being ignored or given lip service.  They acknowledge they don’t have the answers but they are bringing attention to the issues, albeit a lot of them and in an disorganized fashion.”

November 2 – I receive an email from a summer employer of mine that they are having a cocktail party on Thursday evening, a shirt-and-tie event with their friends from around the city.  These people had previously taken me to a Knicks game; court-side, $900 seats, out of pure generosity. Old Money.

In returning their kindness with selfishness, I instantly thought of a story.

This OWS is everywhere, but because the 1% is so few and far between, nobody has gotten to them.  If anyone was the 1%, it would be these people.  I was going to go to the party, put on my summer Hampton’s persona to mingle, and see how they feel about people occupying THEIR street.
November 3 – A Facebook link informs me of a poorly written, but all together enlightening article.  It wasn’t enlightening because of the words on the paper, but instead because of the unfiltered and thought provoking photography, like most of the media coverage of OWS.

In this case, it was a picture of a scruffy looking, long haired yoga instructor, raising his lanky arm above his head in front of a dozen or so followers.

I knew this man.  I drank a beer while he played guitar one night. It was my good friends brother, JaYa Thy’OwnSelf.

Again, the selfish ideas flashed. I’m going to get his number from my friend, stay the night amongst the wealth of the city, and meet up with JaYa in the morning to spend a day in the life of a protester.

For a literary journalist, what could be better than sleeping in a penthouse high above NYC one night, sleeping on the earth in the middle of a NYC park the next, and constantly interacting with conflicting environments to battle out the issues in my own mind? I was getting heated.

Me – Hey Ma, I was thinking Fri morn you meet me in the city, go check out Occupy Wall Street. I’d bring you to a train after to go home, then maybe stay over.
Sandi – Stay where? Yea cool if I can see you? Who would you be with?

– In the PARK ma! And I don’t know, maybe with hundreds of protesters?!
– I thought you meant a hotel. Really? Sure.

-It’s a movement ma! That’s the whole thing, if I’m gonna see it from both sides I hafta live it, and they’re living in the park.
-Well it seems cool, real ‘60s, I’ll meet you there, if your alive.

Later that night I went to class all-hyped, expecting to leave class early to get my story.  I was needed in class, and missed the swag cocktail party.  I texted the host to apologize, explaining that I’d still like to see them Friday night if possible.  She never answered. I went to the bar. November 4 – My mother knows me all-too well. She knows Thursday nights can get rowdy, and held off on boarding a train until she spoke to me.  My cousin wasn’t so lucky.  She was in the city ready to take pictures for my story. I got on a 2 p.m. train from Poughkeepsie to finally see Occupy Wall St.  I was supposed to be there by 8 a.m.

I called JaYa from the train.  After occupying Wall Street for over a month and a half straight, JaYa had up and left for the Occupy Ithaca movement. He gave me the information of people to get to know and people who would help me out, all of whom came through on his promise.

I felt like my trip had started like the movement itself: ambitious and determined but disorganized and forced.

November 7 – I’ve been down at OWS for a couple of days now.  The least I could do for arriving late and making my cousin miss her ride, was find us a place to sleep indoors that first night.

It was nice and warm in a bed.  I stayed in the hotel for three nights.

I get the same feeling about OWS as most Americans. I’m both amused and bewildered by it’s simplicity, cheer it’s ambition, and laugh at it’s absurdity.

But I don’t find the shoeless bongo player donning what has to be a fake set of dreadlocks underneath that bandanna, or his message, absurd.

I find absurdity in the vanity of a lawyer I talk to a few blocks down from Zuccoti Park, eating lunch, who mocks the “whiny poor people,” ignorant of the fact that he isn’t part of the 1%.

I find absurdity in the dip-spitting, American flag waving modern-day cowboy who stands alone, occupying a part of the park that an illegal alien probably keeps clean in his absence, while railing against the harm illegals do.

I find absurdity in the late-night gathering of a few occupiers around a laptop, reveling in the recognition of their cause on South Park.  They are making fun of you. Lampooning you, and making a parody of your “movement,” which is ironic in itself because everyone is so stagnant.

Maybe OWS should play on this vanity though.  It’s ingenious really.  Movements, organizations and charities alike have for years now.

The universal message to join a cause is this: Because you’ve done so good in your life and you’re so much better off than so and so, I’m asking you to help in any way possible. It makes people feel superior while playing upon their inherent guilt. And it works.

Why tell the very people who you want help from, that they, like you, aren’t doing as good as they can?  #AmericanProblems.

November 9 – I lay awake in a tent, uncomfortably warmed by layers of clothes, layers of blankets, layers of sweat, filth and monotony.

Uncomfortably warmed by disposable hand-heaters stuffed into pockets and socks, hoods and undergarments.

I start to think about how maybe this whole thing is just a reflection of Fear and Loathing in Las Vegas, and that Hunter was right: in this capitalistic, opportunistic, animalistic world of winning at all costs and eliminating competition, chaos rules.

Then I remember I’ve spent my whole life of athletics learning that it is unity in the face of the chaos that rules. Good teams win championships, not players.

Exposing the chaos to the world by shoving the disorder in the face of every computer, every television, and more importantly, in the presence and direction of those who can influence change, is a great tactic for attention.

But then the change is supposed to come.  Someone or some group is supposed to take charge, give orders, and demand action, because that is after all the American way.

No one has stepped up.  No action has came. I’m leaving tomorrow.

November 15 – Mayor Bloomberg has finally had enough. At 1 a.m. Tuesday morning, he ordered police to clean out the park, removing people, tents, and living equipment alike.  Many arrests were made.  He declared that the encampment was a health and safety hazard, and that they are free to protest, but without tents and sleeping bags.  The occupation is over.

Participants of the movement are taking this in stride, and along with the realization that winter is coming, are extolling the positives of the clean up.  They are quick to compare this movement, like my mother, to the ‘60s street cinema that turned into anti-war protests, clinging to hope that this idea is alive, and the occupation was just a tactic.

But, I lay awake in my own bed, uncomfortably warm by a single blanket and the burning fact that I have a story past due, with nothing worth reporting.

I think about how the lack of leadership is a reflection on Pete Hamill’s Two Minutes to Midnight: The Very Last Hurrah, in which he bemoans the American way of killing the American Dream.  Bemoans us all for killing off Robert Kennedy, the last great icon of a generation, and wondering aloud if the death of the man he so beautifully characterized signified the final chapter for the American Dream. He predicted the deterioration of both our political and societal machines.

As Hamill put it, “in this shabby reality behind the glittering facade, Americans were doing what they do best…cursing because hope doesn’t last very long among us.”

Tue Nov 29 , 2011
This year’s New Paltz Convention (NPC) hosted a new kind of tournament taking place over the two-day event. The Omni Tournament was aimed at unifying all the gamers in an overall points system to determine a winner. Devised by the leaders of the New Paltz Gaming Society, the organization behind […] 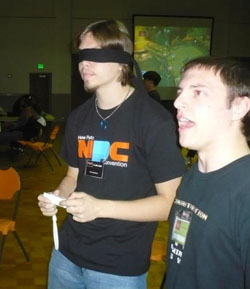