Evan O’Brien holds up a cookie, examining it as if he were searching for imperfections on a Van Gogh. “ People need to be granted permission to take a cookie,” O’Brien said, handing a customer at a recent Thursday farmer’s market, his most popular cookie- a classic chocolate chip. “I tell those people it’s OK-grab a cookie.” Chocolate chip is just one of the many vegan cookies that O’Brien has built his ethically delicious business, Vegan O’Brien Baking Company, around. Vegan O’Brien also sells pumpkin chip and oatmeal raisin cookies, as well as chocolate chip brownies at SUNY New Paltz’s farmer’s market every Thursday in the Lecture Center lobby.

When O’Brien started baking his cookies, he was not a vegan nor was he a baker. Rather, he wanted to prove that contrary to his friend’s belief, a great-tasting vegan cookie was possible.

“It all started out very small,” O’Brien said. “In 2007 I just started bringing trial batches of the chocolate chip cookies to parties and potlucks.”

Three years later, O’Brien became a vegan himself, and decided to make baking vegan cookies his full-time job, ensuring that each animal-free treat is comprised of 90 percent organic ingredients.

When food is labeled as vegan, it means that it contains no animal by-products, including eggs, dairy and other animal-derived substances such as honey. O’Brien believes that while baking vegan is simple, people often opt out of it because it involves too much risk and mystery. Bakers generally fear that vegan pastries may lack a desirable consistency; while they worry that they may not taste as fulfilling as baked goods made from animal products.

He remains hopeful that more people will make the conscious choice to eat more ethically and lead vegan lifestyles thanks to their positive encounters people have with vegan products.

“People have to be ready to accept something that seems new and mysterious,” O’Brien said. “Handing out cookies is my activism. It’s not my thing to show people awful pictures of animals being abused, to inspire them to make new choices, so I hand them a cruelty-free cookie instead.”

In addition to encouraging people to choose vegan foods for ethical reasons, O’Brien wants people to understand the health benefits as well. He recommends friends to watch documentaries including his personal favorite “Forks Over Knives,” which examines the claim that most degenerative diseases that afflict us can be controlled or reversed by abstaining from processed and animal-based foods.

While he cites watching documentaries as a great resource to learn about veganism and the perils of factory farming, he asserts that many people develop diseases caused by pharmaceutical drugs prescribed to them, as well as antibiotics given to livestock. O’Brien feels that there is a lack of knowledge about the serious health risks these drugs can inflict.

His father suffered from health issues, that O’Brien links to his poor diet. In addition, he notes that towards the end of his father’s life, he was taking several prescribed pharmaceutical drugs.

This gave the younger O’Brien the push to lead a more holistic lifestyle, refraining from pharmaceutical pills “and other unnatural junk.”

While O’Brien is an advocate for having a strictly plant-based diet, he recognizes that people have to be ready to accept a new lifestyle.

“Giving up meat and dairy to the average person is like telling a smoker to quit,” said Ryszard Lagodka, O’Brien’s longtime friend and SUNY New Paltz alumnus.

“It takes education and fully weaning off of those foods to start seeing a change in how you view what you’re putting into your body,” O’Brien added.

O’Brien remains hopeful that more people will turn to veganism, as veganism has become more of a household name in the last decade among older generations and youth alike, who face dairy intolerances. He claims that after a few weeks of switching to animal-free foods, people experience notable health benefits.

“It’s one of the few solely vegetarian restaurants I know of in town, and the food is great so it makes it really easy to be a vegetarian,” said Stephen Geary, a server at Karma Road.

According to SUNY New Paltz campus’s dietician, Emily Ferencik, one can eat a wide variety of plant-based proteins every day to meet the body’s need for essential nutrients. Hasbrouck Dining Hall on campus offers a variety of vegan options daily at The Wild Mushroom station.

“At The Wild Mushroom, students can ask the cooks to prepare a veggie burger at any time, the salad bar is stocked with tofu and different types of beans, and the cooks are always willing make your pasta or stir fry with whatever veggies, beans or other toppings you choose,”Ferencik said.

New Paltz is not the only place in the country that has been welcoming plant-based diets, as schools across the country are implementing Meatless Monday programs. The Meatless Monday campaign is an initiative of the John Hopkins school of Public Health that asks Americans to abstain from eating meat just one day out of the week.

The campaign is currently underway in 23 countries, advocating for the reduction of meat consumption by 15 percent to improve individuals’ health and the health of the planet, according to the Meatless Monday website.

As for a Meatless Monday campaign in New Paltz?

“I love the idea of a Meatless Monday, not because I think meat is a “bad” food, but because any effort to increase vegetables, beans, legumes and whole grains in the diet is a huge step in the right direction,” Ferencik said.

Darwin is Alive in New Paltz

Fri Feb 21 , 2014
The Evolutionary Studies Program (EvoS) celebrated Charles Darwin, the grandfather of evolutionary studies, the week of what would be his 205th birthday with two guest speakers who encompass concepts of evolution from both a human and plant life standpoint. Watch the Presentation Darwin’s theories are the centerpiece of the EvoS program, […] 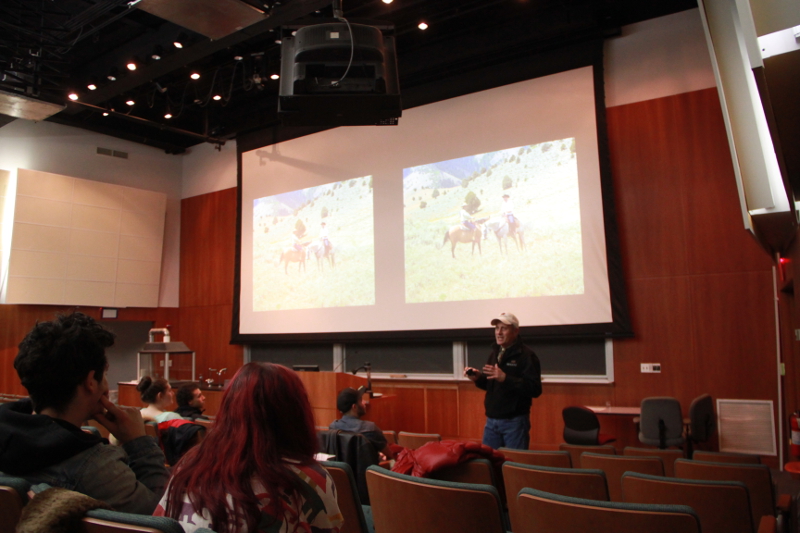