The farmers at the Brook Farm Project, located on 80 Gatehouse Road in New Paltz, are still trying recover from the devastating effects of hurricane Irene that occurred last month.

The heavy rain and violent gusts from the tropical storm has caused the farm to lose many crops due to over saturation and fungal disease from the rain water. Day by day, the staff is regaining the produce and land itself to restore the farm back to normal.

“The plants were very stressed because of the rain,” said farm manager Heidi McCowan. “Every fifth plant was rotten.”

According to McCowan, the farm’s soil was constantly drenched in the storms rain water which caused the vines on the unripe winter squash to die early. Along with the squash, crops such as eggplant, tomatoes, green bell peppers and string beans have died.

“The storm has also led other plants to malfunction. Crops like broccoli, cauliflower and brussel sprouts were still alive but were not maturing enough for the harvest,” said the farm manager.

At the early sights of the storm, the farm staff was extremely nervous about the future outcome of this season’s community supported agriculture (CSA) program. This program has members of the farm contributing money before the season begins. Throughout the season they receive boxes of crops depending on their food plan or portion size.

“The CSA program was supposed to last until the week before Thanksgiving,” McCowan said. “But I don’t see that happening.” During the storm the farm’s power went out for seven days causing refrigerated plants such as kale, watermelons, and tomatoes, to spoil and have to be thrown away. At the end of the storm, the staff had to throw away $800 worth of produce causing a major setback.

David Clark, co-creator of the CSA program, and math professor at SUNY New Paltz, says it’s been the worst he’s seen and has wiped out production. Clark, for the past seven years, has gone to the farm every Saturday morning to pick up the week’s portions of what was harvested. Because of Irene’s damages, each week’s portions have been smaller than usual in size.

“As a member of the CSA program, you share the risk of natural disaster with the farmers,” Clark said. “The fresh, chemical-free and wholesome food this farm has to offer is worth the risk.”

Fortunately, since the farm is located on a hill, it didn’t get completely flooded. Other New Paltz farms, situated on the bottom of a hill, like Old Ford farm and the Huguenot Street farm have had to cancel their CSA programs completely for the rest of the season. The water on these two farms had nowhere to drain and suffocated all the plants prepped for harvest.

Clark is very confident that the farm will overcome this lengthy obstacle by having a strong staff of dedicated farmers.

Wed Oct 26 , 2011
The Career Resource Center (CRC) hosted the semester’s first Networking Fair for Jobs and Internships. The event took place Tuesday, Oct. 4 between 12 and 4 p.m. in Student Union MPR. Students were welcomed by smiles and greetings from faculty members of the CRC, who stood behind a long rectangular […] 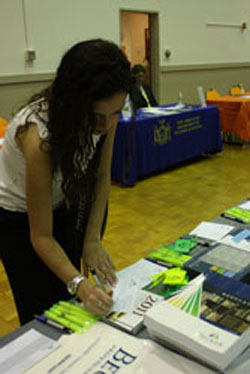