A mob of students and professors stood in front of the Humanities building. People yelled as they held picket signs that said, “Don’t strip our budget.” A camera close to the action captured students in bikinis and professors screaming out of megaphones.

It was a protest against cutting $9 million from the SUNY New Paltz budget last year.

Ilana Wexler is very politically active. A third-year sociology major at New Paltz, she belongs to Get Out to Vote and the New York Public Interest Research Group (NYPIRG), among other socially active groups.

Wexler, 20, is currently helping Arianna Basco, a recent graduate and project manager of Get Out to Vote, on the Maurice Hinchey (D-Hurley) campaign for Congress. As a young liberal, she has strong opinions on many issues: hydraulic fracturing (“hydrofracking”), social welfare, the economy and SUNY budget cuts to name a few.

Wexler is against hydrofracking, a technique that a combination of water, sand and chemicals to drill vertically and horizontally into the ground in order to extract natural gas. Wexlar says she believes it will ruin the state’s water supply. In areas of upstate New York and Pennsylvania, people can almost set their drinking water on fire because of the mass amount of chemicals and gas, she said.

Wexler also said that due to the economy, many social welfare services are being cut, forcing people to live on the streets. She went on to say that many family preservation programs that keep children in their homes are being cut. Parents cannot afford to take care of their kids, even if they work more than one job.

“The only choice is to give up their child,” Wexler said.

With the struggling economy, Wexler said there are no jobs because the government is spending more on the military.

According to Wexler, there is an increasing amount of greed on Wall Street, and a lack of empathy for homeless people affected by large companies as well as the future kids of the world.

“No one is giving them hope,” Wexler said.

As a supporter of voting, Wexler joined Get Out to Vote, which is responsible for calling people and going door-to-door in the dorms, having conversations or handing out fliers. One day, Wexler got access to a list of people’s names and numbers compiled from the Kossover Law Firm in New Paltz. She then messaged her friends on Facebook.

“Most people want to be heard, but are untrusting of our system,” she said.

As far as local elections go, Wexler has a theory that there is a divide between the young and the old generation. Whenever she represents Get Out to Vote, she notices the discouragement of young people not being interested in voting.

“People have kind of given up and don’t see a point to voting,” Wexler said.

However, regardless of who votes, Wexler plans on voting for all Democrats because she agrees with what they plan to do.

She believes that the work she does is extremely important, and is trying to encourage students to realize this. “We deserve as much voice as anyone else here,” she said, and the only way to ensure that is to get out and vote.

At Polls, Voters Have Distinct Motivations

Wed Oct 20 , 2010
Tuesday’s midterm elections saw a steady turnout of voters at New Paltz Middle School. Electoral inspectors opened the polling place doors at 6 a.m., with hundreds of people passing through them before noon. New Paltz Town Supervisor Toni Hokanson was among the voters. She said the 50 percent turnout in […] 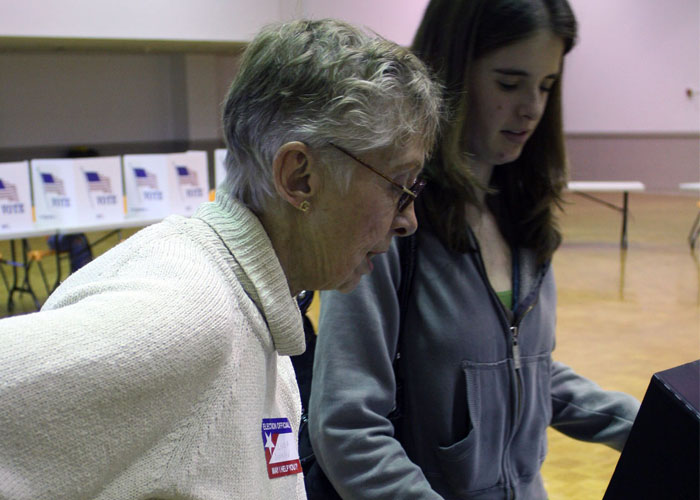