A panel of experts from SUNY New Paltz presented various perspectives on the process of hydraulic fracturing, and why they think it is a significant issue locally, nationally and globally at SUNY New Paltz March 1.

Hydraulic fracturing, or “hydrofracking,” is a process by which natural fractures in sedimentary rock are diffused using pressurized fluid in order to harvest petroleum, natural gas and other various resources for energy. The Marcellus Shale is an example of this type of rock that is thickest in the Hudson Valley. Its location makes Kingston and parts of Sullivan, Ulster, and Delaware counties sites of potential hydrofracking.

The lecture, held in the Coykendall Science Building Auditorium Thursday evening, brought together a crowd of over 100 students, local residents, and activists. The panel consisted of four professors from various departments within the college who have all taken an interest in hydrofracturing.

Professor Alexander Bartholomew of the geology department spoke about the process of hydrofracking and the associated problems with it such as “behind pipe flow.” This can be caused by improper casing of the pipes used for hydrofracking, he said, which can result in gas escaping unintentionally. He also said the pressurized fluid used to open the fractures in the rock can leak into natural water sources, potentially polluting it with natural contaminants or radioactive elements such as radium, radon, and uranium.

Professor Shafiul Chowdhury, of the geology department, said if waste and contaminants get into the water, they don’t get naturally recycled and can remain there from one to two years. Bartholomew concluded the risks of fracking are too high, and the prospective economic profits too low, and that it’s simply not the best option.

Professor Brian Obach from the sociology department spoke about the “negative externalities” of hydrofracking, which are the “side effects of economic activity that negatively affect others.” He described hydrofracking as a “dirty, cheap, fossil fuel source” which leads “directly away from renewable energy.”

Supporters of fracking say it is a cheap way to harvest fossil fuels, but Obach said there are serious costs associated with it which are not always considered. These include the risk of disease and other health effects, loss of farmland due to floods or drought as a result of climate change from burning natural gas, and loss of property due to extreme weather or rising sea levels.

Professor of political science Daniel Lipson said America’s relationship with fossil fuels is an “addiction,” and he called for a “serious culture change.”

Lipson described how almost every aspect of the average person’s  life depends on renewable energy. He said the International Energy Agency presented a “rosy perspective” that there are oil fields that are yet to be harvested, or even found.

He found that viewpoint overly optimistic, saying crude oil production had already reached its peak around 2006 and would only continue to decline. He said we are headed for a future of “desperation and depletion rather than wealth and bounty” and that we need to find a way to live our lives without fossil fuels, which would require significant lifestyle changes.

All of the panelists advised against the continuation of hydrofracking, saying it is dangerous and that needs to be a shift towards alternative energy sources, and a less wasteful way of living in order to ensure a better, healthier, and safer future for this country and planet.

Thu Mar 15 , 2012
Dumbledore’s Army of New Paltz has been fighting against the dark arts, to make a difference among the community, for two years now. The club does not  concentrate on the fictitious novels from the Harry Potter series, but sets its focus on fighting against dark arts in the real world. […] 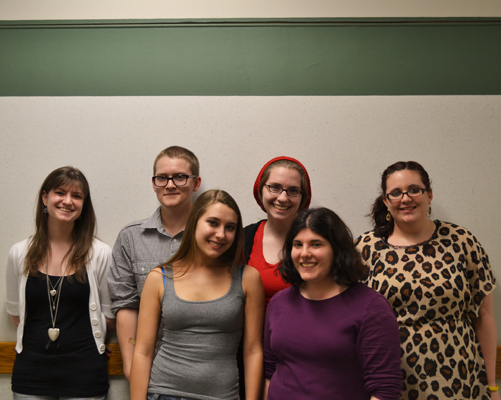