Among the most controversial of the proposed cuts is a 10 percent reduction in state financing to SUNY schools, as opposed to imposing a hike in student tuition over the coming fiscal year. The governor’s outlined SUNY cuts are poised to save the state $400 million. The last increase in SUNY tuition came in 2009, when students saw a tuition spike of $620.

According to Donald Christian, interim president of SUNY New Paltz, $2.3 million in budget reductions for SUNY New Paltz had been deemed achievable prior to the governor’s SUNY proposal. Under Gov. Cuomo’s outlined budget cuts, however, with no increase in tuition, $6 million in budget reductions would need to incur. Christian says that 87 percent of the school’s core budget is in personnel, and that the real challenge ahead will be dealing with these budget cuts without touching personnel or shuttering school departments. “I appreciate the governor’s concern about tuition and affordability,” said Christian. “The SUNY leadership points out, however, that SUNY tuition is already very low by national and state standards.”

If the governor’s budget is to pass in its current form, without a tuition increase and with no legislative action to restore taxpayer support for SUNY, Christian says the impacts of the school’s ability to provide the fullest educational opportunities to students will be impacted.

“With the finalization of the governor’s budget, as proposed, we would almost certainly see cuts in programs, an increase in class sizes and less flexibility and choices in class schedules for students,” said Christian.

Christian remains hopeful, however, that the governor will deliver some restoration in state funding for SUNY.

A key question lingering over this SUNY debate is whether SUNY schools should have the ability to set their own tuition prices. Christian supports such a concept.

“I think either the campuses themselves or the overall SUNY system should have the capability to set their own prices,” said Christian. “There will always be this struggle, though, between how to keep education affordable and maintain a budget that is sufficient for our programs.”

“I think the governor should advocate for a balance of both budget cuts and tuition increases,” said Smith. “Or, better yet, he should get this out of the hands of politicians and allow for SUNY schools to make these financial decisions themselves.” Others support neither a tuition increase nor a budget cut.

“I actually reject how this whole debate is being framed by the media and politicians,” said Jeff Fonda, former Vice President of Student Association at SUNY New Paltz. “There are many alternatives out there to raising tuition or cutting university budgets at all.”

Besides the SUNY cuts, Cuomo’s outlined budget, which comes at an estimated price tag of $132.9 billion, will impose a 10 percent decrease in overall state spending. Medicaid and education budgets will be slashed by $2.85 billion a piece

Ulster County Legislator Hector Rodriguez, now in his seventh year of public office, has mixed praise for the governor’s proposals.

“I think the governor is absolutely right to propose deep spending cuts, given the long-standing fiscal problems this state has been putting off for too long,” said Rodriguez. “Still, his proposed cuts in Medicaid and local aid are troubling, as are the continued unfunded mandates to local government.”

In its current form, the governor’s proposed budget does not extend an income tax increase, dubbed the “millionaire’s tax,” on the wealthiest New Yorkers.

“There’s definitely a sentiment out there that those with more means should be able to shoulder more of the burden,” said Rodriguez. “But, while I think we should continue progressive income taxes, we also cannot tax all of our state’s entrepreneurs out the door.” To the dismay of some state public employee unions, the governor has warned that upwards of 9,800 state workers could be laid off if unions do not give up wage and benefit increases. Gov. Cuomo’s warning comes amid turbulent labor protests over bargaining rights in Wisconsin, where that state’s governor, Scott Walker, has been embroiled in controversy over his contentious relations with his state’s unions.

“While I think the public will always support the rights to collective bargaining, as they are in Wisconsin, I’m still not sure public employee unions are getting the whole message,” said Rodriguez. “In these tough economic times, you can’t tolerate contracts which give raises or perks, and, if labor won’t concede to Cuomo, he’ll be left with few alternatives.”

A recent statewide poll, conducted by the Siena College Research Institute, found 72 percent of New Yorkers in support of Gov. Cuomo’s overall budget proposals. However, only 41 percent approved of a 10 percent reduction in state financing for SUNY. The poll found Gov. Cuomo sitting on a job approval of 57 percent.

Mon Feb 28 , 2011
On a tiny plot of land on Huguenot Street, no bigger than a coffee table, rests a small monument. Although easy to miss, it is as important as any of the landmark houses on the historical road for what it reminds us about Huguenot society. The monument looks like a […] 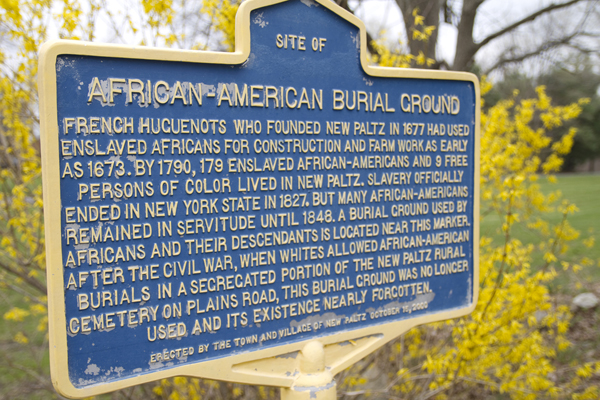