The Kinks, The Mekons, Tall Dwarfs, The Clash and The Velvet Underground.

These are the top five all-time favorite bands of John Lefsky, the owner of Jack’s Rhythms in New Paltz.

The walls of Jack’s are plastered with posters of Joy Division, Elliott Smith, Fugazi and The Cramps: Lefsky’s list of bands is all too reminiscent of the record store cult classic, High Fidelity by Nick Hornby. This musical staple of New Paltz has managed to keep its doors open since the late Jack Goldberg opened them in 1990.

For a while it has seemed that vinyl was becoming a dying breed. In our increasingly technological society, with devices like iPods and a variety of ways to illegally download anything and everything, there appeared to be no use for vinyl anymore.

However, in 2009 more vinyl was sold than in any time in the history of Nielsen SoundScan’s existence, which began in 1991. Some 2.5 million were sold, an increase of 33 percent from 2008.

Lefsky believes the increase in sales is partly due to the recent heightened availability of vinyl. According to Lefsky, more and more vinyl pressing plants have popped up over the last few years.

Vinyl, he said, allows for more appreciation of music as music.

“A really good record is a complete thing,” he said. “It’s meant to be listened to organically. It was conceived and sequenced in a certain way, to be heard that way.”

Seattle-based music writer and avid record collector Martin Douglas agrees. Douglas shows a new record in his extensive collection on his blog every Sunday, a tradition he has deemed “Vinyl Sunday.” He believes that listening to a record is like listening to an artist’s complete thought. Listening to this complete thought without any pauses and gaps, aside from flipping the record over is, in Douglas’ opinion, how every artist would like to be evaluated. Douglas also believes that nostalgia is a factor in the vinyl resurgence.

“From vintage clothing stores to supped-up hot rods from the ‘50s, people love having something from the past to hold onto,” he said.

Lefsky and Douglas explained that, along with the idea of nostalgia comes the idea of a record being a fetish object. They agree that the detailed cover art and liner notes make a record more of a work of art, rather than just a disc that plays some music or an MP3 player that contains multiple albums and has no personality. They both consider the physical appeal of a record in comparison to a CD to be a main reason for Vinyl’s comeback. The music industry has taken notice of vinyl’s rebirth, resulting in newer, more contemporary bands releasing their music on records. According to Lefsky, many times there is a CD included with the vinyl, also accompanied by a coupon for MP3 downloads. This convergence of old and new allows consumers to indulge their desire for vinyl, while also providing the means to have the tunes on the go.

There is no clear answer as to the upswing in the sale of vinyl recently; however, the numbers don’t lie.

Douglas said its popularity was best reflected when he moved this year.

“When I moved into my new apartment over the summer, the heaviest thing I had to carry was the box with my record collection in it,” he said. “You get really attached to something that tangible.”

Thu Dec 9 , 2010
Summer beckoned. Twenty-seven students could hear it out the window, kicking at spring’s heels to move on. It was the last day of classes. The students’ final projects, printed out and punctured with a Swingline, were now in their professor’s black leather briefcase. For some, it was the last day […] 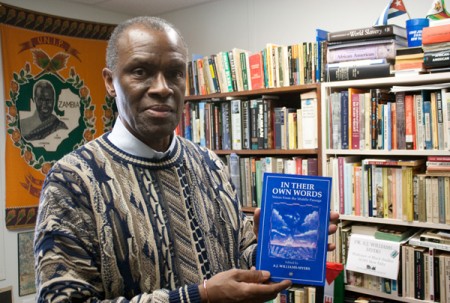