On the outskirts of the SUNY New Paltz campus lies a haggard loading dock and a narrow staircase leading up to an entrance that reads “Food Preparation Center.” Inside, a barren hallway is filled with huge metal doors side by side labeled “frozen food meats,” and “frozen food fruits and juices.” The empty hall looks like Freddy Krueger resides nearby. Finally, towards the end of the hall sits the windowless door of the Environmental Health and Safety office.

This office has been asked to spearhead the education and awareness of the campus smoking policy, a policy not easily enforced, especially when many people have no idea whose lap this task falls into.

The campus smoking policy states smoking is prohibited within 50 feet of building entrances and open windows, in all exterior stairwells or on any building roofs. A Campus Community-based enforcement policy requires staff and students to speak up to smokers too close to a building.

Director of Environmental Health and Safety, Michael G. Malloy said he volunteered  to see how he could improve the policy, which calls for community-based enforcement on the campus.

“I send out student, faculty and staff reminders about the campus policy,” the five-year employee said. “A lot of people do not want to take on that responsibility [of reminding others], but they want to complain about the smokers. You really can’t have one person enforcing the policy. It’s not my responsibility but I was asked on how to get it improved.”

As he ironically stood smoking his morning cigarette a few steps outside the Humanities Building door, on the opposite side of campus as the Environmental Health and Safety Office, third-year media production major Alex Prawdzyk said he didn’t see why smokers couldn’t just adhere to the 50-foot policy.

“If a non-smoker comes into a building and gets hit in the face with a puff of smoke, I imagine that’s not very pleasant,” he said. “So I don’t see why it’s such a big deal to walk away from the building.”

He hesitated, looking at the nearby doorway, then back down at his lit cigarette.

Prawdzyk isn’t the only smoker with a Catch-22 outlook. Second-year English major Tommy Lorimer, a smoker for two years, stood smoking just a few feet from an academic building before his class. He said he agreed with the 50-foot policy.

“People are disrespectful, I understand why it’s in place,” he said. “I see a lot of other people doing it. That doesn’t justify it necessarily, and if someone ever complained I’d definitely walk a little away.”

Lorimer grabbed his neck and scoffed, a mix of cold air and smoke flowing into the air.

Lorimer said he is more likely to step 20 paces away from Shango Hall where he lives, but not near the academic area since he has never seen the policy enforced.

“I have seen UPD officers walk by while people are standing right here, and they’ve never said anything to me and I’ve never seen them really bother anyone, but they totally could. They’re within their right to do that,” he said. “So if someone ever asked me or told me to step away, I definitely would, I’d respect that. At the same time I feel like it’s something they should come up to you and just mention it and most [smokers] would just walk away and respect that.”

Garrett Schomann, a a third-year psychology major and a smoker for four years, said he wasn’t sure why he didn’t follow the rule while taking a puff of his cigarette next to the academic buildings.

“I think it’s fair,” he said. “ I don’t really follow it because I’m lazy, but I think it’s totally fair because before I started smoking, I absolutely hated having to breathe that in.”

He looked away flustered.

Schomann’s attitude regarding the 50-foot-rule was similar to many others’.

“I guess cause I know I wouldn’t get in that much trouble. I would just be told to walk away,” Schomann said.

Russ Howitt, the stacks manager at the Sojourner Truth Library said he “slyly” tells smokers to stay 50 feet away from the library.

Howitt quit smoking nearly 14 years ago and said he hopes smokers’ peers would say something, but that oftentimes circumstances make it hard.

Director of the Office of Student Activities and Union Services, Mike Patterson described the enforcement dilemma in two extremes, and said he did not know if there was a solution possible for this issue.

“Ideally, peers in the campus community would self-enforce, but, you’re asking people to sort of step out of a comfort zone and approach somebody, which is not a skill that everybody has,” he said. “The opposite end of that scale is having extreme enforcement with university police enforcing it and I don’t know if that is an appropriate thing for university police to be spending their time on.”

According to Deputy Chief of Police Mary Ritayik, it is not.

“It’s not actually anything criminal or anything the police would handle,” she said. “The college has a health and safety department who is in charge of enforcing [these] violations. It’s not something university police would cover.”

The University Police Department has never given a ticket to a smoker who did not adhere the 50 foot rule, according to Ritayik.

“There’s no ticket to write,” she said. “ It’s a student policy. For us, there’s nothing we can do.”

Robert Guidi, Fire Safety Specialist in the Department of Environmental Health & Safety said he does what he can to make students respect the policy, and has put ‘no smoking’ signs “everywhere.”

“I’ve been here for 20 years and it has gotten a lot better,” he said. “All we can do is put signs up and verbally tell them. Sometimes they’re right next to the door by the sign. I’ve never smoked a day of my life so I don’t understand the addiction, but it must be pretty strong.”

Mon Mar 10 , 2014
Kevin Halcott was hired as a dishwasher and busboy at the Main St. Bistro in New Paltz, N.Y. after dealing with a struggle many Americans know all too well: unemployment. The 26 year-old of Ulster County resident was unemployed from August of 2013 to February of 2014. “I did a […] 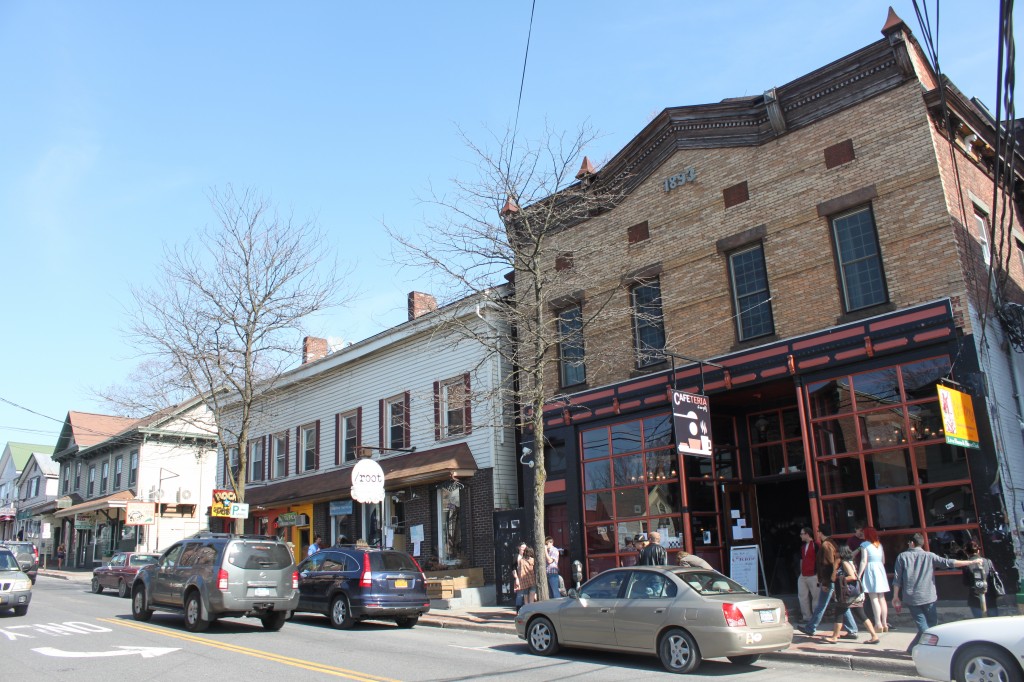