When we go to vote this year, that noise will not be in the background amongst the small talk that goes on at all voting areas.

With this year’s new technology, everyone’s votes will be cast by pen, and read through a large scanner.

When you enter your voting place, you’ll be asked to sign in like you normally would. Once signed in, you’ll be handed a folder, a marker, and a ballot that looks like something from the SAT’s.

On this ballot, you’ll see the names for all people running. Next to their names will be a little bubble you must fill in completely in order for the vote to count.

Once you are handed your ballot, you will be escorted to a little booth that will ensure the privacy of your vote. Some voting places will only have three to four booths. If your voting district is large, there might be up to 20 booths at your designated area.

After you have completed your ballot, you place the ballot inside the folder and walk over to the new scanner. Once you get to the scanner, you take out the ballot and slide it right through as if you were putting a dollar into a soda machine. On the scanner will be a little screen to your right that will say “ballot successfully scanned.”

After that message pops up, you hand in the folder and marker and you’re on your way.

Of the 129 machines passed out through the state, three or four of them will be randomly selected to be opened up and have every voted counted by hand.

As seemingly easy as the new voting system is, dealing with paper instead of machines may leave more room for error. State Assemblyman Phillip Boyle, D-Bay Shore, has called the new paper-method “archaic,” a step backward for technology.

“While the old voting machines were antiquated and in dire need of an update, they did represent simplicity; you flipped switches for your choices then pulled a lever to make your vote count,” said Boyle in a released statement in May 2010. “Now, instead of using that model, a more convoluted method will be used, thus creating more room for error and lengthening the process.”

The Commissioner of Ulster County Board of Elections, Thomas Turco, is all for this new system. “It makes it much easier for voters,” said Turco. “The whole process seems to be much faster and it gets people in and out without any hassle.”

For handicapped voters, the new scanner also provides a screen with headphones and a remote control attached. This is on the opposite side of the scanner everyone else uses. This was designed so that someone who is handicapped can vote at the same time someone is scanning their own ballot.

Polls will open at 6 a.m. on Tuesday, Nov 2 at your nearest voting site.

Mobilizing Students, NYPIRG Gets the Vote Out

Tue Nov 2 , 2010
They fight for students’ rights. They advocate voter registration and education.  They are NYPIRG — hear them roar. Many students at SUNY New Paltz have recently heard that roar in the form of a voter registration form. Ryan Long, NYPIRG project coordinator is among the team that passes out these forms […] 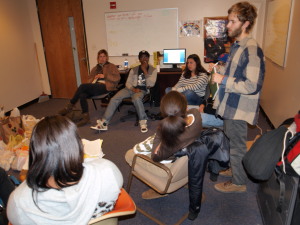