The $13.4 million, 15,000-square-foot Atrium will provide 12,000 feet of new space for casual discourse and is the largest college-managed project in SUNY New Paltz’s history. The addition boasts a myriad of green features including: A glass enclosure which will ‘harvest’ and provide at least 75 percent daylight inside the Atrium, use of renewable resources in construction and recycling of demolition materials, radiant heating and cooling, and use of LED lights, to name a few.

The addition will add several features for students that the SUB, last renovated in 1971, was lacking. Students will be able to enjoy new dining venues and areas to gather and collaborate as well as an enhanced book store.  Restaurants will include Mojo Vista featuring Mexican food, and The Sub Stop, a hot and cold sandwich shop.  Tokyo Sushi and Seattle’s Best will now operate as full-service cafes.

“Not only has the form of the Student Union Building changed,” said Vice President for Student Affairs L. David Rooney, “but so, too, has the function of the building.  The Atrium has provided a venue for casual social interaction, recreation, commuter space and small group study that our existing Student Union Building was unable to do.  The opening of the Atrium immediately facilitated those positive changes.”

Funding was secured by several sources including $10 million from Sen. Bonacic and Assemblyman Cahill via the state of New York; $1 million from Campus Auxiliary Services plus $700,00 for food court renovations and furniture; $387,600 from Validis Resources in renovations for the book store.  The balance of the funding was provided by the State University Construction Fund in conjunction with SUNY New Paltz.

The design elements for the Atrium were all provided by established designers. The celebrated  IKON.5 Architects of Princeton received accolades and an award for its development of the Atrium.  Director of Facilities Design and Construction John McEnrue said, “The award celebrates the new structure’s unique design, its symbolic relationship to the Shawangunk Mountains and, most importantly, its purpose.”  Finnish American designer and furniture maker Eero Saarinen, who is responsible for the TWA terminal at John F. Kennedy International Airport, designer and architect Arne Jacobson of Denmark, and Italian sculptor Harry Bertoia all made contributions to the Atrium’s furnishings.

Police Crack Down on Underage Drinking

Thu Sep 16 , 2010
Underage drinking has generally been an assumed part of college life. While this is no different at SUNY New Paltz, the New Paltz Police Department is determined to combat the problem. “We are not going to eradicate the problem, but we can do our best to keep a tight lid […] 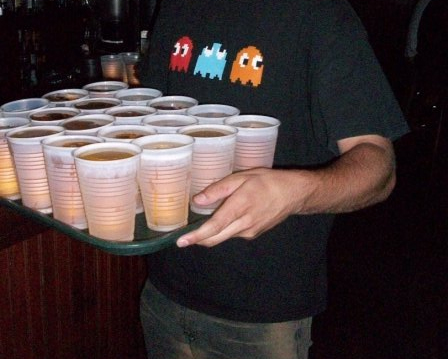