SUNY New Paltz students have a front-row seat to one of the closest House races on the national stage. The contest for New York’s 19th Congressional District has garnered widespread media attention, not to mention millions in outside money from political groups bent on controlling the House of Representatives for the second half of President Trump’s first term in office.

Television ads for both the incumbent, Republican John Faso, and his Democratic challenger Antonio Delgado have dominated the airwaves in recent weeks. With just a few days to go until Election day, the race remains too close to call.

In a Monmouth University poll released Oct. 30, Delgado leads Faso 49-44 percent among likely voters; and by 51-43 if a Democrat “surge” to the polls happens this coming Tuesday.

An earlier Siena poll had Faso up 44-43 percent over Delgado, well within the margin of error.
One important factor in this race will likely be the student vote. With an estimated 5,000 eligible voters on the New Paltz campus, student voters may hold the power to sway this election …. if they turn out on Tuesday.

“A lot of people are already registered, but as for going to the polls, it’s a completely different story. A lot of people don’t think their vote matters,” said Emalee Renjilian, a SUNY New Paltz student who interns for the advocacy group Democracy Matters.

Some students, especially those who were old enough to vote in the 2016 presidential election, say the political climate has reached a fever pitch because of Trump’s victory and the nation’s reaction to it.
“I feel like it’s these elections that truly make the difference for our nation … so voting this election is very important to me,” said senior Hailee Sutton.

A Siena College/Spectrum News poll released on Oct. 22 shows that 44 percent of likely voters in the 19th Congressional District support Faso while 43 percent support Delgado. Six percent of voters in the district are supporting a third-party candidate, and 7 percent are still undecided just days before the election. The poll’s margin of error is 4.6 percentage points.

“Barnburner. Nailbiter. Photo finish. Pick your phrase and buckle up because this race is going right down to the wire. Faso and Delgado are locked in a battle royale with the electorate about as evenly divided as it can be,” said Siena College pollster Steven Greenberg. “Each has more than 70 percent support from his own party and independents are separated by a point.”

A Tufts University report on campus voting habits found that 56 percent of the approximately 5,564 eligible voters on the New Paltz campus voted during the 2016 presidential election. That was up from 47.8 percent of eligible students who voted in 2012.

The National Study of Learning, Voting and Engagement study found that the voting rate for all the colleges they surveyed is 50.4 percent of eligible voters. By that metric, New Paltz students are more politically active than their peers nationwide.

When asked if she thinks SUNY New Paltz is politically active, senior Emily Davison said, “I was here during the 2016 presidential election and there were protests, but now it seems like everyone is a lot more revved up due to those results. It’s really interesting to see the difference now with the accessibility to information about each candidate for the district on campus and actually motivating people to register for the upcoming election to take action and vote.”

Students attending SUNY New Paltz will have the opportunity to vote for several statewide offices, a state senator and a state assemblyperson.

As for the state Senate race, students can vote for a replacement for longtime state Senator John Bonacic, who announced earlier this year he is not seeking re-election.

Rosendale Councilwoman Jen Metzger is facing Orange County Clerk Annie Rabbitt, a former state assemblywoman, for the 42nd Senate District, one of the “in-play” seats that could determine which party controls the state Senate for the next two years.

New Paltz students can also cast a vote for incumbent Kevin Cahill, a Democrat (and New Paltz grad) who is running unopposed for a twelfth term.

They can also cast a vote for either incumbent U.S. Senator Kirsten Gillibrand, or her challenger, New York City Republican Chele Farley.

Some students recognize how easy it is to vote while in college, compared to those who are more involved in raising a family and working. She also recognizes how much encouragement students get from faculty and each other to participate.

“On this college campus, voting is definitely emphasized by students and faculty,” said sophomore Wilisa Fernandez, who said she is not sure if she would vote if she were not a student. “The school makes it accessible to vote on campus, which is convenient for me because I live on campus. If I was home, I would not have this kind of support and guidance to show me where or how to vote. It would probably be too much of a hassle and I would not vote.”

“I really do think politics are so corrupt, so I don’t trust that rigging isn’t a thing,” Fryer said. “Also since so many young people don’t vote and participate I feel like that hurts the whole process, making people who do vote less effective.”

How are they voting?

New Paltz junior Jason Stapf said a candidates party affiliation and endorsement is “very important” to him.
But when asked to elaborate he said, “Most of them share similar views to me, but I’m not opposed to vote against my party in favor of someone who I think represents me more.”
Many of the students interviewed for this article say they spend considerable time researching the candidates and they tend to remain undecided until almost Election Day.

Some, however, are comfortable voting along party lines, and this year’s hyper-political atmosphere seems to have reinforced the idea that control of Congress is a priority for Democrats and Republicans who have laid out vastly different platforms in 2018.

Sophomore Ava Bustamante said, “I think that parties tend to align with beliefs, and in the House and Senate, that can be really powerful as votes tend to be consistent among parties. If there are other candidates of the same party I would choose the person who I most closely align with, and the same goes for presidents.”

“I like to look up people and see what their stances are before I vote,” said junior Vanessa Campos.
When asked if she votes strictly along party lines, Campos said she typically votes Democrat, but political parties are not very important to her.

“I used to think that [it was important]… Listening to Bush as opposed to Trump, they have much different policies… It depends on the person and the policies they want to implement.”

Why aren’t they voting?

Even though college students are encouraged to vote, and a polling place is set up in the Student Union Building for them, other restrictions such as complicated paperwork, part-time jobs and registration deadlines often prevent students from doing their civic duty.

“I cannot vote because I am not a citizen, but if I could, I would vote Delgado,” said sophomore Hannah Osea. “I believe he is the best choice because he cares about the people he’s supposed to represent.”

Sophomore Michael Viscovich is unable to return home to vote on Election Day. When asked why he wasn’t using an absentee ballot, Viscovich said, “I was lazy and didn’t want to think of it.”

When asked if he would be voting on November 7, student Kyle I’m responded, “No, honestly it’s just one opinion. One opinion isn’t going to change anything. It doesn’t really matter.”

Some students are hoping to make a political statement by not voting.

“I’ve been thinking about this a lot lately and I don’t think I’m gonna vote, but it’s not because I feel my vote doesn’t matter; it’s because I think politics are the worst thing that’s ever happened to the United States,” said junior Sabrina Mastropolo. “I know people see not voting as ‘throwing away’ your vote but I feel like by not voting I’m not playing into this huge divide that politics has put between Americans.”

“I was brought up with the ideology that you have to vote — it’s a necessary part of life and a duty that you have to uphold,” said Maxine Jenna Yurowitz, a New Paltz senior. “But as a student, I can see why so many people wouldn’t want to vote because either their family is on the opposing party and they don’t want to upset someone they are financially dependent on, or some people are just too stressed with school to think about one more thing they have to do.”

Mon Nov 5 , 2018
Students in Professor Lisa Phillips’ Feature Writing Class were assigned to profile people at the forefront of change: Emma Ward is a zine creator and uses the different clubs on campus to advocate for different issues in society and help disadvantaged people as much as she can. Taped on the […] 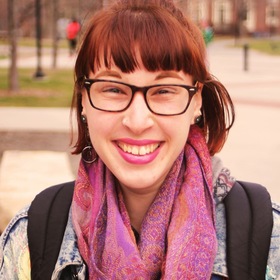