A famously art-driven town, New Paltz N.Y., hosted the fifth-annual Celebration of the Arts(COTA), a free festival for all local artists on Oct. 8. All forms of art and creativity were encouraged and welcomed with open arms. Painters and sketch artist positioned themselves along cobblestone paths documenting the beauty of Huguenot Street and tents were erected for those

The major event at COTA was artist and poetry readings. Thirteen local artists read excerpts of their work aloud in the cozy yet sacred atmosphere of the historic stone church. One presenter was New Paltz resident and SUNY New Paltz Alumna Kate Larson. She is a zine and blog writer who read stories about her personal experiences. The tones of her readings varied in emotional intensity. The first two were somber accounts of train rides and views of psychotropic medications but her last segment was a humorous series of letters written to the singer/songwriter Mariah Carey, from her tumblr Dearest Miriah, for every day in the month of July. The first letter was more of an introductory format asking Ms. Carey how many pieces of fan mail she receives on a daily basis or if she ever received a piece of hair from an obsessed fan. The letters following this became more and more illicit. “I began fabricating miscommunications and they became borderline erotic,” said Larson. At the end of her reading she announced that Mariah Carey has not written back yet but it is most likely because she is just thinking of the right words to say to such a great fan.

In the performance tent was Natya Niketan School of Kuchipudi Classical Dance. This is a major attraction for COTA, according to Pat Henneberger, performance coordinator. Three young students of Guru Kantham Chatlapalli showcased dances from traditional Indian culture. Hennenberger said Chatlapalli’s students have performed here every year and they hope to invite them back again.
“It’s really visually amazing,” said Hennenberger; “their costumes are fantastic and the dances are really beautiful.”
The dancers all wore brightly colored traditional garb adorned with small mirrors and beads. Before each set, the girls would introduce the dance they were performing and what it represented. According to the Natya Niketan, “The dances represent concentration, emotions, balance and [how] one can achieve their goals in life.”
The booths and the gallery tent consisted of various artists showcasing their talents and selling their work. Artists eagerly answered questions and promoted their artwork as patrons walked by examining the beauty. Artist Amy Barresi of Tipsy Turtle Henna Body Art in Highland said she loves COTA and it gives her a great way to end her season.

This is her sixth year doing henna professionally and her third year being involved with COTA.
COTA is an annual event held in New Paltz on the Saturday before Columbus Day.

Sun Oct 23 , 2011
While New Paltz Flood Aid for farmers, families and first responders affected by Hurricane Irene already raised $30,000 from their kickoff event on Oct. 2, they increased this amount to more than $52,000 on Oct. 16 at their benefit concert in Hasbrouck Park. Although there has been an exceptional amount […] 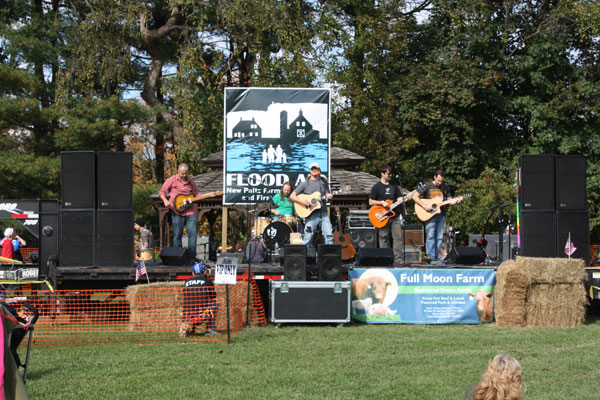