“I’m very interested in going back and fighting,” Hinchey said.

Although all of the election results were not in, Hinchey’s campaign was only counting down until it became official. With 84 percent of precincts reporting, Hinchey had a 7.5 percent lead over Philips.

The crowd cheered as incoming poll numbers were shown on a large screen. By 9:30 p.m. the early showings were a Hinchey victory. Excitement buzzed throughout the room.

In Ulster County, with all results in, Hinchey had defeated Philips by more than 4,000 total votes.

Shortly after 10 p.m., Hinchey came out to speak to his supporters. He spoke briefly but strongly, and never claimed victory outright, but hinted at it.

“It’s going to be challenging, but I love the challenges,” he said.

One of those challenges will include being a member of the minority party in the House of Representatives. The Republicans, after Tuesday’s election, will have the majority of seats. Hinchey spoke harshly of the opposite party.

“These adverse circumstances didn’t come about in the 18 months. They came in the 8 years before,” Hinchey shouted.

The 18-year Congressman managed to avoid the anti-incumbency that swept both the nation and the state. John Hall and Scott Murphy, both Democrats, lost their congressional races in the 19th and 20th districts respectively.

Hinchey will have a vote in what could be two very important years in Congress. A variety of legislation is expected to be voted on, from gay rights in the military to a possible repeal of the Health Care Reform Act.

The issues Hinchey focused on mostly throughout the campaign and in his speech Tuesday night were the economy and the middle class.

“I will fight hard for the common man and the middle class,” he told his supporters.

Thu Oct 28 , 2010
Facing midterm elections that would eventually result in the resurgence of the Republican Party, environmentalists rallied at SUNY New Paltz on Wednesday, Oct. 27 to push for local and national reforms. Nearly 165 students, faculty and advocates assembled to demand an end to what they call unwarranted wars, unjust poverty […] 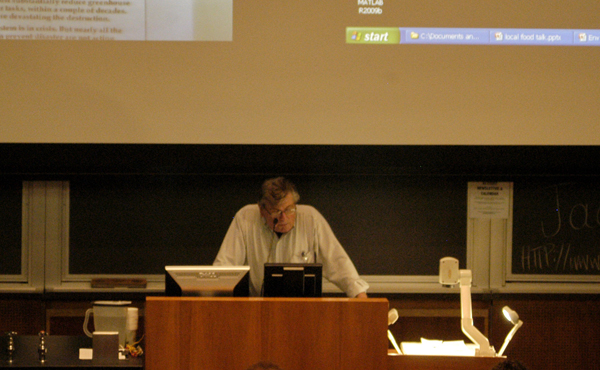