Although various groups on campus put up a fight against the state’s recent budget adjustments, they ultimately failed. Because of recent cuts, SUNY New Paltz was forced to cut roughly $6 million, causing the administration to eliminate the nursing program, suspend admissions for 10 graduate degree programs and to lose 70 people from the staff. The money cut for this academic year is almost 35 percent of the direct state support provided to the campus in the 2008 fiscal year.

The state first raised SUNY in-state tuition by $310 per semester then continued to cut the SUNY budget drastically. Originally, 90 percent of the money gained from the tuition hike was to be sent to the state, in order to sponsor a state economic bailout. In light of that, SUNY New Paltz decided to take action.

From the start, President Steven Poskanzer began to speak out against budget cuts. He went to legislators to discuss change. Then, along with other members of the administration at the school, he started working on an educational program to teach students about the budget cuts and help them to speak out against what is happening to their school and tuition money. They created http://www.supportnewpaltz.com, which listed information on the budget, how different legislators voted on the issue and forms to send letters to the state. As of March 24, 12,482 letters were sent through the Web site.

Poskanzer met with numerous assemblymen and attended a lunch meeting where the governor spoke.
“I was disheartened by what I heard…he [Gov. Paterson] gave a speech that he’s doing a great thing for SUNY,” said Poskanzer. “He’s dead wrong.”

Poskanzer said that he felt that higher education is not a high enough priority for Democrats. He sought support from upstate New York Democrats with SUNY schools in their areas and said that they were a “political lever worth pulling.”

New Paltz’s chapter of the New York Public Interest Research Group (NYPIRG) also attended Lobby Day to speak out. Maria Davila, a member of the group, was in attendance. She has been voicing her opinion with other students since they learned about the tuition hike and budget cuts.

Davila said that when she heard about the hike, the first thing she did was educate herself on the issue and why it was happening in order to speak knowledgably with legislators.

“It really is a battle, but within the mind,” she said. “You must be able to hold them accountable for what they are doing. You must remember that you have the power and not them. You voted for them. You hired them. Your taxes fill their paychecks. They must listen to you.”

Davila sent numerous letters through http://www.supportnewpaltz.com, but also wrote handwritten letters. She said that a handwritten letter “speaks volumes louder than simply clicking a mouse.” She added that letters to legislators are important for democracy, as they allow the people to speak out for what they want.

The school was forced to create a plan for cuts. They spread suggestion boxes around campus for faculty and staff, asking them for ideas to save money.

“It’s dangerous to assume that senior administrators know everything,” Poskanzer said about their reasoning.

They then evaluated the ideas to see which were plausible, as well as whether they kept with the mission of the college and complied with all the laws.

When the state budget was officially announced, it was decided that the state would follow through with an 80/20 plan. With this plan, the SUNY schools would receive 20 percent of the tuition increase, while 80 percent would go to the state.

“While the 80/20 budget was meant to appease us, it angered me,” Davila said. “I pay my tuition for my professors, my campus staff and my beautiful campus! I do not pay that tuition to fix potholes or keep nonviolent criminals in jail or fund elementary schools. That’s what my family’s other taxes are for.”

Though Poskanzer was still unsettled over the budget plan, he was forced to make $6 million in cuts at the school.

The school attempted to make cuts in areas that would not affect the people of the campus, with $3.7 million being cut from non-instructional areas. However, $2.3 million will come from the instructional areas.
“We couldn’t get the whole way without cutting things that will affect people,” Poskanzer said.

Within the instructional areas, the school is forced to suspend admission to the Master of Science in Education and Master of Arts in Teaching (M.A.T.) programs in chemistry, earth science, French, mathematics and Spanish. Students within the programs will be allowed to finish out their degrees, but no new students will be accepted.

The largest cut will be the phasing out of the nursing program. According to Poskanzer, the program is expensive and has low enrollment. All students within the program will finish out their degrees though accepted students will no longer be able to attend the school.

“Closing a program immediately affects people’s lives; we’re going to phase it out,” Poskanzer said. “We’re not going to leave these students out in the cold.”

The school will also discontinue the December commencement ceremony and consolidate and reorganize areas of the school. New fees will also be put in place for specific science classes and individual music lessons.

Additionally, the fee for faculty parking will be raised by $10, management/confidential employees will now pay $60 per year for parking and reduced parking for students will be eliminated.

“We’re pleased to be able to find $6 million without doing worse things,” Poskanzer said. “We’re trying to be as humane and sensitive as we can be.”

Poskanzer said there is still a small window for change. He added that what happened to the school is unfortunate and regrettably more changes could still be made to the school’s budget.

Poskanser said that he hopes the example of the cuts at New Paltz will have an effect on Paterson and ideally, bring further change. He said that he hopes no more money will be taken from the SUNY budget and stressed the importance of education.

“They need to go pound on someone else’s door,” he said.

Davila urges students to not give up and continue sending letters to the state and speaking out against the budget cuts.

“Students should remain involved; there should not be a lull. Then they’ll think that we’ve settled and they’ll screw us over more. We have not settled,” Davila said.

“The millionaires who are not getting taxed aren’t taking a break to protect their money. We can’t take a break either.”

Thu Apr 30 , 2009
Students at SUNY New Paltz scheduled to finish their degrees in December 2009 will not have the option of commencement at the end of the year. According to Director of Media Relations Eric Gullickson, the college has been faced with multiple cuts in its base operating budget and financial action […] 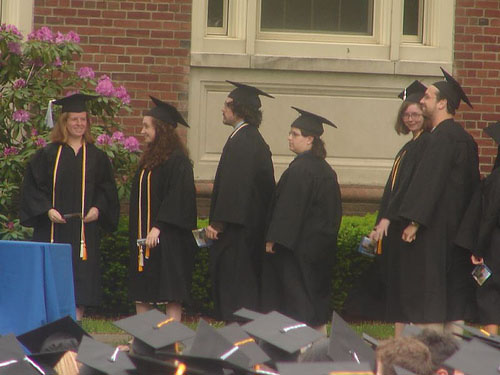