Facing midterm elections that would eventually result in the resurgence of the Republican Party, environmentalists rallied at SUNY New Paltz on Wednesday, Oct. 27 to push for local and national reforms.

Nearly 165 students, faculty and advocates assembled to demand an end to what they call unwarranted wars, unjust poverty and worldwide environmental abuse. The trio of problems is referred to as “The Perfect Storm: Environmental Crisis Plus Endless Wars and Global Poverty.”

“The Perfect Storm is a problem not only facing Third World Countries. It is affecting all of us right now,” said Irwin Sperber, a sociology professor

The Perfect Storm tied together the concepts of peace, war and poverty, which according to the event’s supporters, all connect to the impending environmental catastrophe. Jack Smith, editor of the Hudson Valley Activist Newsletter and co-sponsor of The Perfect Storm, says the intent of the event was to “educate people about the environment and to get people involved in the movement for environmental sanity.”

In the hearts of environmentalists, the eye of the storm is war. Supporters continuously said that because America is so infatuated with warfare, we often ignore larger issues. Billions of dollars are spent fighting enemies, financing the Pentagon and funding the hundreds of military bases stationed around the world. Smith rallied the congregation to demand the government to rethink its priorities and reallocate its funding. He said that if the government cut its defense budget, it would have the finances to work toward climate change, finance a green economy and lift millions out of poverty.

“We need to broaden the perspective on the environmental issue by presenting it from a national and international point of view,” Smith said.

The second element of The Perfect Storm is the poverty inflicting millions around the globe.

To represent this issue, Donna Goodman, co-sponsor for the event, asked the audience to count to six. After the crowd counted in unison, Goodman declared that a child somewhere in the world had died due to starvation. In that same time span, Goodman said, America spends $38,000 on the Iraq and Afghanistan wars.

Pounding on the podium, Goodman said the money to prevent these atrocities is everywhere around us. Americans waste millions of pounds of food annually, she said, but there are still 3 billion people who are food insecure. Being food insecure means you don’t know if or when you will have your next meal.

“The main dilemma is the misdirection of America’s unparalleled wealth,” she said.

Brian Obach, chair of the Sociology Department at New Paltz, preached the need for people to come together to force change. Obach said rich nations, such as the United States, need to be the first to carry the environmental burden since they are the biggest violators. But Obach has little faith in the free market to push for positive change. He said the environmental push needs to be independent from politics because the United States will not take the chance to fall behind a competitor.

“The real source of hope is people power,” Obach said. 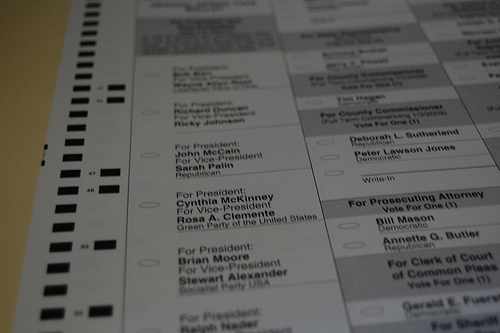