As a result of the racist messages and graffiti that appeared around campus last week, the SUNY New Paltz community response has been swift and unified in denouncing the behavior.

College President Donald Christian has sent not one , but two e-mails to the entire SUNY New Paltz community, both explaining the situation and condemning the acts.  In reminding the campus about the school’s goals of “equality, diversity, inclusiveness, and respect,” Christian said, “these are sobering events that should remind us all of the hard work we face in becoming the community that I believe we all aspire to be.”

Peter Brown, retired SUNY New Paltz professor and chapter president of United University Professions, also sent out an email to the entire school faculty and staff and all UUP members.  He echoed the campus’ reputation for diversity, but reminded faculty that “these latest incidents, however, show that we need to be vigilent and cannot simply assume that these values are shared universally.”

Two on-campus events have also been scheduled to address the situation.

The first, held Nov. 17, was sponsored by the Black Studies department and the Student Association, with discussion being led by Jonathan Espinosa, a third-year Black studies and sociology major.

The second, being held November 30 at 7 p.m. in the MPR of the Student Union, was set up by Christian and Student Association President Terrell Coakley, and will be more of an open forum than a lecture.

The heated reaction to the incidents is in part over speculation that this was no simple prank, but a concerted effort to start a “race war.”  These rumors have been circulated through social media and blogs after an anonymous Tumblr account, titled The Smoking Gun, released photos and news of the incidents before any news outlets.

The photos were posted along with the caption, “so, my friend decided to start a race war up in New Paltz.  The story behind it is gold.  But I’m just gonna sit, watch, and wait.”

The Tumblr was so overwhelmed with negative reaction that it has since been deleted, but only after being reblogged over 200 times.  Here is a screenshot of the post.

Whatever the thought process may have been behind the incidents, Christian’s second letter reiterated to students that “while we cannot know the motivations of the person(s) responsible for these acts, having them splinter our community may well feed into his/her/their goals. We must not allow that to happen.”

Since the discovery of a “colored only” sign above a water fountain on November 8, a day after the campus-wide Black Solidarity Day, and initial reporting of the story here at The Little Rebellion on November 10, the Associated Press and subsequent other papers have picked up and ran with the story, putting SUNY New Paltz under national scrutiny.

For continuing coverage of this story and a glimpse at just how much attention it is getting nationwide, check out our storify!

Occupy Wall Street: I Took a Week Off from Classes for This?

Thu Nov 17 , 2011
September 17 – Occupy Wall St. begins in New York City’s Zuccotti Park. Mass media coverage, and the proliferation of social media based demonstrations allow for a presence strong enough to successfully “occupy” the park. Occupy movements spring up throughout the country, and parts of the world. September 25 – After […] 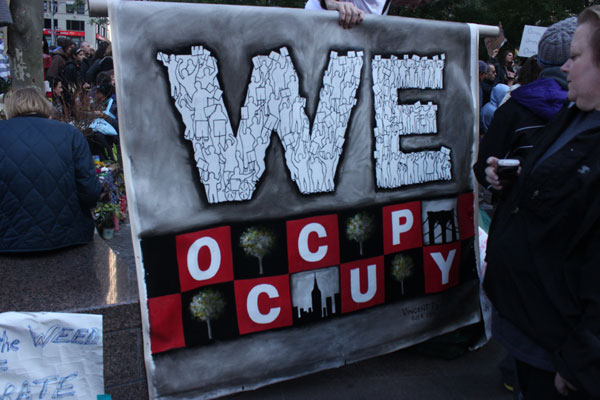