As of 2018, there were 1,728 homeless people in the Mid-Hudson Valley, according to Mid-Hudson Community Profiles. While that statistic may be outdated by a few years, it can be inferred that homelessness in the Hudson Valley has increased due to effects of the recent COVID-19 pandemic. These numbers are also based on Housing and Urban Development’s point-in-time count, the main way that the United States currently tracks homelessness. It relies on volunteers spending one night every year searching through streets, parks and forests for people sleeping in tents or living in their cars. Housing activists have criticized this practice by saying that it undercounts the actual number of people experiencing homelessness.

One of the biggest obstacles agencies face is locating and keeping track of homeless people. The Built for Zero campaign insists it has a better way to keep track of homelessness that could help state, local and federal agencies, along with nonprofits and community activist groups, to more adequately respond to this crisis. In an article by Casey Biron published by The Christian Science Monitor, Jake Maguire, co-director of Built for Zero, called the way the U.S. government keeps track of homelessness “crazy” and said that it provides the public with very inaccurate numbers. “It’s data for someone else,” Maguire wrote. “It doesn’t give us any insight to improve our system. We don’t know who these people are or what they need.” To make matters worse, more than 60% of states failed to conduct point-in-time counts last year as a result of the pandemic. Fortunately, Built for Zero wants to use this opportunity to replace the point-in-time count as the country’s main system for tracking homelessness.

Maguire says that Built for Zero helps cities “create a comprehensive list of people experiencing homelessness, including information on their situation and needs.” The organization updates its data monthly. This helps local nonprofits and government agencies have access to an up-to-date “by-name” list that makes it possible to locate everyone who needs housing. “We cannot expect to drive meaningful reductions in a dynamic problem like homelessness without comprehensive, real-time, person-specific data,” said Beth Sandor, co-director for Built for Zero.

Built for Zero is currently operating in 80 jurisdictions and has helped 14 communities across the country reduce homelessness to what the organization calls “functional zero,” meaning that homelessness is rare overall, and brief when it occurs. According to estimates by the organization, it took an average of over a year for one person to find housing without Built for Zero’s real-time data, but when real-time statistics were applied, individuals have been able to find housing in 30 days or less in some cases.

Hudson River Housing has been working to solve the homelessness crisis since 1982. The organization provides housing and other services at its overnight facility in Poughkeepsie and has built more than 1,200 affordable housing units on its own nearby real-estate developments.

Even with such efforts, the affordable housing crisis still continues to worsen due to exponentially increasing property values in the Hudson Valley. Mid-Hudson Community Profile statistics show that, on average, Hudson Valley residents spend 33% of their household income on housing, which is higher than the nationwide average of 31%. “The need we see out there is significant and it’s increasing,” Christa Hines, the executive director of Hudson River Housing, said in an article in Chronogram. Hines added that it’s definitely gotten worse over the past five years and that people even outside urban areas are struggling to find affordable housing. “We track who utilizes our shelter services and we’re seeing a lot of people who are coming from outside Poughkeepsie because it’s the only place for them to go to get those services.”

The pandemic has caused homelessness in the Hudson Valley to worsen and, according to Hines, has also forced Hudson Valley residents to realize the scarcity of available affordable housing options in the region.

Hines told reporters that the negative stigma many Americans have surrounding the terms “affordable” and “public” housing are part of the reason why efforts to make these projects more widespread have succumbed to failure. Regardless, she continues to hold community events to break down the stigmas surrounding homelessness so Hudson Valley residents understand that “anyone can experience homelessness”—not just people living paycheck to paycheck.

According to a press release by Dutchess County Executive Marc Molinaro, the county’s 2021 budget includes nearly $900,000 in funding for temporary housing units at the Dutchess County Sheriff campus. In addition, there was a $1 million grant from Housing and Urban Development directed to help Hudson River Housing to continue to serve those in need in the Hudson Valley. This year’s budget also includes funding for the creation of a “centralized entry point for eviction prevention, transitional housing information, and other related support services.” This centralized system is supposed to make it easier for those in need to contact support services.

However, if the county could get in contact with Built for Zero, they might be able to further streamline the process and proactively reach out to those in need instead of waiting for them to contact support services themselves.

In addition to lacking the ability to locate those in need, government agencies and nonprofits often lack the funding necessary to provide adequate assistance for them. However, evidence shows that if governments simply allocate the funding towards addressing this crisis, government agencies and nonprofits would be more successful in reducing homelessness. According to an article from Northeast Ohio Coalition for the Homeless, Chris Knestrick, executive director of NEOCH, said the city of Cleveland was able to reduce homelessness by 30% due to provisions enacted to contain the spread of COVID-19. For instance, the city used eviction moratoriums to keep people at risk of homelessness in their homes and housed already homeless people in hotel rooms.

Before pandemic precautions were enacted, homelessness in Cleveland was 17% higher in the first half of 2020 compared to the first half of 2019. Also, the traditional response of putting the homeless in congregate living situations became unsafe as a result of COVID-19 and new responses had to be created so social distancing protocols could be followed. The city was able to advance from congregate living shelters to more adequate forms of housing such as hotels with the help of money made available as part of the CARES Act.

Knestrick stated that as CARES Act money rolled in, so did the people engaging with NEOCH’s services. “As people are working just to survive outside, they’re out there hustling and doing their thing and it’s a lot harder to engage and contact people.” He believes that hotels also lended a hand with building relationships with the community. “I think it’s really about how we are going to move forward and build policies and gain resources to help prevent people from entering into homelessness in the first place.”

When asked why funding has been an issue, Knestrick told reporters that the blame lies with state, local and federal governments. According to Knestrick, his organization has previously talked with local officials about “the need for a flexible [small] housing subsidy in the community” for people facing homelessness or housing insecurity. However, this has yet to happen.

Fortunately, the issue surrounding funding seems to have gone away with the onset of the pandemic, even though most pandemic-era programs expire at the end of 2021. As a result of this temporary funding increase, Ohio has been able to more adequately respond to its housing crisis. “We know that housing assistance and homelessness prevention [are] needed but we’ve never seemed to quite prioritize it [as] we have during the pandemic,” Knestrick said. “I really think it’s a question of political will.”

There are solutions to homelessness like those listed that can be replicated anywhere people have moral courage and enough public support. The Built for Zero campaign can help improve the way governments track homelessness, making it easier for housing rights organizations like Hudson River Housing to locate and provide assistance to those in need.

However, the technology to improve data tracking can only be obtained if more funding is directed towards solving homelessness. In addition to funding the improvement of data-tracking, Cleveland serves as an example for how increased funding for homeless assistance programs during the pandemic was able to reduce the city’s homelessness by 30%. If all of these solutions are enacted, there should be nothing standing in the way of eliminating homelessness in the Hudson Valley—and the United States as a whole.

Matt Dougherty is a senior at SUNY New Paltz majoring in journalism. He writes about U.S. foreign and domestic policy and runs an independent media blog called The Bull-Moose Note.

Mon Nov 8 , 2021
This story has been republished with permission from the Legislative Gazette. A Marist College poll shows that 58% of New Yorkers support legislation that would allow terminally ill patients to end their own lives if they choose. In contrast, 37% oppose medical aid-in-dying, and 5% say they are unsure. A […] 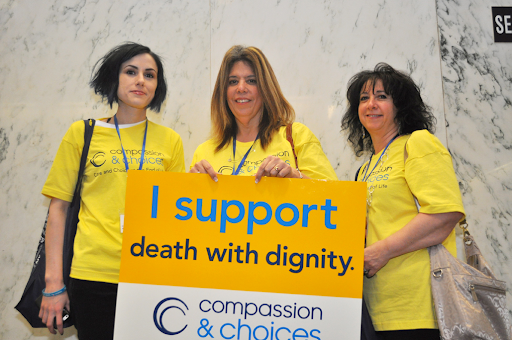