“The Dark I Know,” SUNY New Paltz’s first original student-written musical, told the story of two families’ experiences during the complex and socially crippling era of Nazi Germany. The character-driven production was as much about human emotion as it was about history, according to playwright and SUNY New Paltz student Alex Eisen.

“I wanted to explore how different generations of people coped during that time period,” Eisen said of the musical, performed in Parker Theatre Oct. 26 to 28. “I wanted the audience to be able to see those struggles through the eyes of these characters.”

The dramatic plot revolved around the relationship between protagonist Hannah, a German journalist with a young son, played by Loren Moslin, and Jewish single father Aaron, played by theater major Mickey DelVecchio.

The show presented an unusual challenge for Eisen, who was not only the playwright, but also the director.

“I realized I’d need to come to rehearsals with a director’s mindset, as opposed to a playwright’s attitude,” Eisen said.  “The first rule of playwrights, especially with musicals, is that you cannot be in love with your words.”

Eisen has been writing the musical since 2008, when he labored over countless drafts of “Hannah,” the original name for his short story about a 1930s German mother and her son.

“The theater bug bit me one day,” Eisen said. “I thought, ‘This is an idea that could really transition well to a musical.’”

Since then, over 100 pages were trimmed off the script, a testament to how intensive the editing process is. Eisen spent several months before the production working closely with Stephen Kitsakos, assistant professor of theater at New Paltz, and Eisen’s consultant for the production.

“What I ask Alex is, ‘What are the compelling reasons why people sing in this show?’” Kitsakos said. “He needs to find those moments and then tell that story to his audience.”

Eisen asked his friend John Watts, a third-year music composition major at N.Y.U., to help create some of the music, and what started off as a favor turned into a “full-blown partnership,” Eisen said. Once a simple short story, “The Dark I Know” blossomed into a full-length musical, complete with a 12-person cast and prerecorded music accompaniment.

After a 2011 staged reading at Ripley Grier Studios in New York City, the dramatic musical moved north to the SUNY New Paltz campus. The original musical was chosen as the Blackbox production for the fall 2012 semester through a rigorous application process, Kitsakos said. The application required students to list all of the projected technical and design aspects of their production, as well as a script, a statement of purpose, and other materials.

Blackbox productions have been musicals in the past, but they are usually straight plays, and they are rarely student written, Kitsakos, who serves as chair of the selection committee, said.

“It’s for students, it’s like their sandbox to go and play in on their own without faculty looking in,” Kitsakos said of Blackbox productions. “Faculty is there to support them, but we won’t get involved artistically or in decisions about casting.”

The casting process also differed from that of the usual Blackbox production, as “The Dark I Know” involved four child actors. The addition of four young boys to the cast was one of the most interesting aspects of directing, Eisen said. Emrick, a member of the infamous Hitler Youth, played by James Hyland, 11, is a particularly complex role.

Brainwashed by his Nazi upbringing, Emrick is a naive and complicated character who Eisen believed the audience wouldn’t expect.

The contrast of seeing a “sweet-faced” youth yell out anti-Semitic remarks onstage could shock viewers.

“It’s an interesting role because we are not used to seeing kids as antagonists, it’s going to be the role that really makes the audience feel uncomfortable,” Eisen said. “But theater has to be as honest of a portrayal as possible, especially with historical events.”

In rehearsals, Eisen appeared contemplative as scene work progressed. Furrowing his brow as he watched his actors rehearse, he often asked actors post-scene, “How did you feel about that?”

“Alex is giving us a lot of options, and a lot of vague questions we get to fill in,” Thomas Anderson, a first-year accounting major, said.

Anderson played the role of Max, Hannah’s ex-husband, and said that being cast as an original character provided challenges, but new opportunities as well. Anderson relied on his willingness to step into a character’s shoes, a skill learned from his past experiences, both theatrical and personal.

“You have to think about a character’s past, present, and future,” Anderson said. “I lost someone last year, and I put that feeling into what I have to feel for my wife.”

DelVecchio said there is a freedom associated with being the first person to represent a character in a fully staged production.

“I like how there’s no point of reference, no YouTube videos to watch,” DelVecchio, 22, said. “I can bring my own personality to the role and help shape it for future Aarons.”

According to Eisen, all three nights of the production had a standing ovation during curtain calls.

“Overall, we got great, positive responses from our audiences, and from who I spoke to, they really seemed to have enjoyed the story,” he said.

Eisen said he was thrilled to return to campus in late August and see a poster displayed for “The Dark I Know,” the result of five years of editing, rewriting, and a little more editing.

“Every day, even now, I am going back and cutting and crafting this piece, but with an original musical, you can do that. You can create, mold, and craft these characters,” Eisen said.  “The sky’s the limit.” 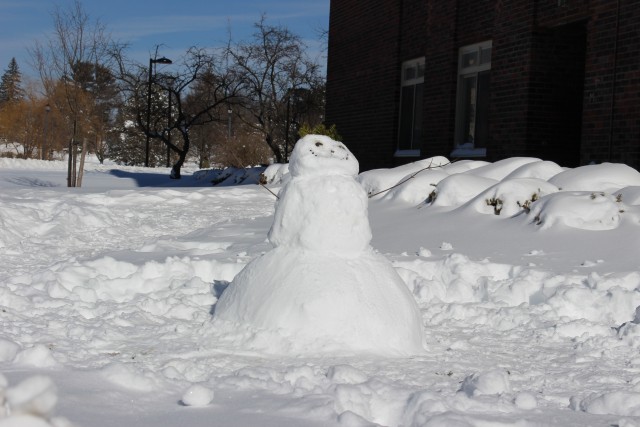