When Black Creek Guitars in Water Street Market shut its doors, it left New Paltz without a guitar shop. For the past two years, the closest guitar haven was in Highland, a 15-minute trip away. However, the new Root Note Music shop aims to fill the gap for the musical community of New Paltz.

Nestled in the front window of Cafeteria on Main Street, Root Note Music held its grand opening on Friday, Nov. 4, but has been operating unofficially since the beginning of October. The shop sells moderately priced acoustic and electric guitars, basses, ukuleles, small hand precession instruments and guitar accessories.

Tyler Beatrice, the 23-year-old owner of Root Note Music, says he used the space as an office before the actual opening. Beatrice said that if he had had a door he would have kept it closed until the grand opening, but because of the set up within Cafeteria he was forced to give in to requests from people looking for guitar strings and slides.

“[The set up] is not a totally bad thing; it just means I need to adjust,” Beatrice said. “Before this happened I thought about how cool it would be to be partnered with a coffee shop. I [thought] it would be a cool scene where you could come in and get a cup of coffee, sit down and get a pack of guitar strings or look at guitars and then it happened, which is kind of crazy.”

“I started helping out at Slash Root by volunteering; I was kind of enticed by the whole business model there,” Beatrice said. “After a little while of selling coffee I asked Justin [Holmes] and Amanda [Stauble] about how they’d feel about me selling guitars in there.”

Beatrice said the co-founders of Slash Root were very supportive of this idea and offered him the back room of their shop for his business. After about four months in Slash Root, Beatrice made the move up to his hometown of Saugerties to partner with a guitar repair specialist. He returned to New Paltz because of its larger music scene and heavier demand for guitars and guitar products, as well as the opportunity to showcase his merchandise in a location like Cafeteria, he said.

While the opening attracted about 100 attendees, Beatrice said the store’s set-up is not without its flaws.

“Obviously space is a factor. Before I was here I had my store in Saugerties,” Beatrice said.  “I had more space there and I could lock the door whenever I wanted to. It’s different here because I’m within an operating business with regular business hours, so I can’t control that.”

Although it has only been a little more than a month since Beatrice set up shop, Cafeteria owner Jim Svetz, 48, is pleased with the effect thus far and only sees advantages to the addition.

“[Root Note] brings attention to the front window,” Svetz said. “It may draw people in that may have not come in simply because it just looked like food, or maybe they just want to check out the instruments,” Svetz said. “It’s kind of a draw for both of us and it also lowers our rent, slightly.”

However, Beatrice is still in the early stages of establishing himself and his shop in the local business market.

“The challenge with this space, because it’s so small, is having [the merchandise] displayed compactly and making sure it’s displayed the right way,” Beatrice said. “Later on maybe I’ll expand to my own place, but that all depends on how this goes and again, it’s too soon to tell.”

Wed Nov 9 , 2011
Black Solidarity Day 2011 was observed on Nov. 7 at the Pointe Praise Family Life Center in Kingston N.Y. Students and Faculty started arriving at the center at 8:30 a.m. and waited in the dining hall for libation and breakfast. Black Solidarity day was started in Brooklyn in 1969 by […] 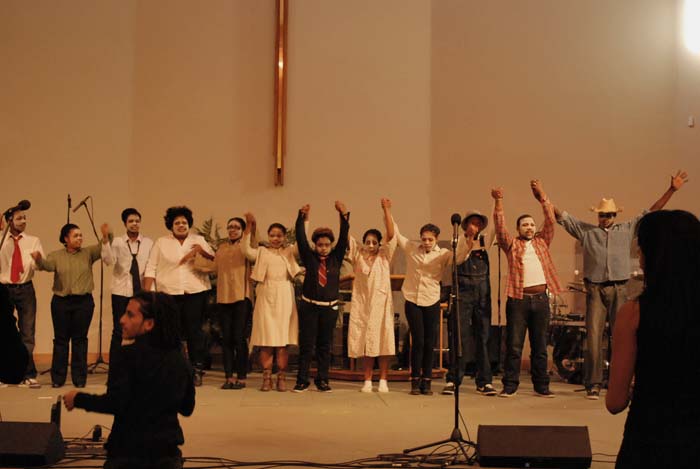