Music is a multi-billion dollar a year industry. While the easy accessibility of subscription streaming services, like Spotify and Apple Music, made up $5.9 billion of the industry’s revenue in 2019, vinyl records and CDs still prove to be lucrative with both formats bringing in $497.6 and $614.5 million respectively.

Jack’s Rhythms has been earning some of the music industry’s vinyl and CD revenue in New Paltz since 1990. The record store has been able to survive the normal ups and downs that small businesses face while also dealing with the changing landscape of the music industry. Owner John Lefsky has also been able to continue on without Jack Goldberg, the store’s original owner who died of brain cancer in 2010.

Whether on purpose or by accident, the appearance of Jack’s Rhythms does not look as though it is participating in corny, distasteful ‘We’re the audiophile music guys’ marketing. The low ceiling makes the business almost reminiscent of a dungeon and cold fluorescent lighting does not necessarily give a feeling of comfortability. But sections layered throughout the tiny, bodega-like shop, along with posters of artists like Joy Division and Frank Zappa lining the walls, provide records and atmosphere for fans of almost any genre or style of music. The wall of books in the left corner by the door is a welcoming site for reluctant people dragged into the store by their music obsessive friend. The brick wall behind the counter holding up a framed decaying poster of The Clash combined with the full and layered sounds of XTC coming from the in-store stereo transmits a feeling of quaintness and warmth that any appreciator of music can enjoy.

However, recent distribution problems with Direct Shot Distributing could hinder projected vinyl and CD sales numbers and have a large effect on the music industry as a whole. Many major and indie record labels rely on Direct Shot to deliver their records to retailers, but lately store owners have been finding their orders arriving late or damaged. Some store owners found that their deliveries did not contain music at all, instead they had pallets of windshield-wiper fluid and cough syrup.

A recent fire at Apollo Masters in California could also contribute to a slow down in vinyl shipments. Apollo Masters is one of only two companies in the world that produce the lacquer plates that later become vinyl records. Vinyl records are made after the lacquer plates are sent to cutters who cut the audio grooves into the plate to make a master plate. From there they are stamped and sent to pressing plants.

Major record labels and retailers won’t be the only ones anticipating these events affecting them. Lefsky is seeing minor consequences from the distribution issues and the Apollo Masters fire, but does not know how much harder of a hit his business could take in the future.

“I haven’t been getting some basic catalog stuff…I’m not getting everything that I want when I should get it,” said Lefsky.

Monostereo and Matador, two of Lefsky’s vinyl distributors, have not been experiencing too much trouble in their shipments. Even if they were, Lefsky says that his customers seem to be patient about waiting for certain titles to come in.

Lefsky is concerned more with the fire at Apollo Masters, as he does not know how that will affect Record Store Day. The annual event is possibly the biggest day of the year for small business record stores.

The possible future slow down in sales would not be the first time the store has fallen on hard times. One of the big problems Lefsky is currently facing is pricing.

“Records cost too much and CDs cost too much,” said Lefsky. “If I want to order a copy of a lot of Beatles CDs, the cost is $14. I would have to sell it for almost $20. That’s ridiculous, I’m not even going to bother to order it.”

The store has traveled through unfamiliar ground before. For example, in the 1990s, vinyl pressings slowed down and many didn’t know how much longer vinyl records would be a relevant medium.

“That’s why some records ended up being really valuable for a while because they didn’t make that many pressings of them,” said Lefsky. “During the whole Grunge era vinyl wasn’t a thing.”

The rise of digital music in the 2000s and 2010s also brought uncertainty, as Lefsky was unsure if physical music and the stores that sell it would be able to ride out the changing landscape of the industry.

“People would walk in the store and say something like ‘oh don’t buy that, you can download it from me when we get home.’ Or I’ll be playing something and they’ll take a picture of it and say ‘I’ll just go home and download it.’” Lefsky remembered. “Thinking it is one thing, but saying it to my face is another.”

Lefsky was offered a job at Jack’s Rhythms after shopping in the store frequently and having many friendly interactions with Goldberg. Lefsky’s story of employment is strikingly familiar to how his interest in music was piqued altogether.

Lefsky grew up in Ronkonkoma, NY on Long Island where music and record stores had a big influence on him. “About a 15 minute walk from my high school was a record store called Record Stuff,” Lefsky recalled. “That’s where I would go after school or when I cut class.”

Lefsky and his friends would often spend time in the store and talk to the owner and manager about music. There he was often turned on to artists, like The Velvet Underground and Neil Young, that would have a lasting impact on him. But that does not mean that Lefsky would carry everything that he listened to with him forever.

“I had a rather bad turn where I was listening to things like Kansas for a while,” recalled Lefsky. “Everyone has their downturn when they’re like 13 or 14.”

Today, Lefsky is on the other side of the register but younger customers still seem to find their way into his store.

“They come in,” said Lefsky. “There were a bunch of kids, probably in their early 20s, and I was playing Gang of Four and they were all singing along to it. It’s good to see that they bought new stuff but they also know who Gang of Four is.”

“There’s a beginning, a middle and an end. It’s more tactile.”

Although Jack’s Rhythms is just a short walk from the campus of SUNY New Paltz, where Lefsky attended college, the store does a lot of its business on the weekend with tourists. Including actor Paul Rudd who bought some records and appreciated Lefsky’s poster of The Clash that hangs on the wall behind the counter.

“It’s only an hour and a half from the city so we get a lot of people from New York, Connecticut, New Jersey, Westchester,” said Lefsky. “I get a lot of business, especially when the weather’s nice, from people from out of town.”

Despite streaming’s dominance in the music market, vinyl still seems to be a medium everyone can get around and appreciate. The unique simplicity and craftsmanship of the artwork and the lacquer plate disc still seems to resonate and outlast other means of music consumption.

“It’s a solid object, it’s not like a thousand songs on a computer,” said Lefsky. “There’s a beginning, a middle and an end. It’s more tactile.”

From Passion to Profession: @BeatbySarahT Looks to Make a Splash in the New Paltz Beauty Scene

Sun Mar 15 , 2020
Sarah Torres, the owner of BeatbySarahT, a self-started makeup business, prides herself on the work she produces. A 19 year-old makeup artist from Harlem, New York‒ Torres brought her business from back home to the SUNY New Paltz campus in the Fall of 2018 to make a name for herself; […] 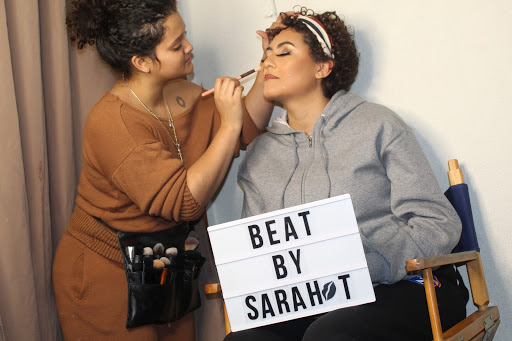