Edited and Packaged by Emma Misiaszek

Over the past 19 years, Ulster County has lost approximately 22% of its public school student body. While a smaller classroom can benefit students’ individual needs, decreasing enrollment rates present challenges for New York state teachers and the profession as a whole.

According to the Out of Alignment report by research group Hudson Valley Pattern for Progress, nearly every mid-Hudson Valley public school is facing a decline in student enrollment. The cost to fund a shrinking school leads to an increase in taxes to accommodate a less than ideal teacher-to-student-ratio.

Greg Perles is a teacher at North Shore High School and president of the North Shore New York State United Teachers (NYSUT) chapter. Perles explained that a decline in enrollment is spreading throughout the state and greatly impacts the current teaching shortage.

“There are only two ways to sustain the growing price of a smaller school district. Either fire a bunch of people, which cuts programs and class sizes, or keep everything the same but let the district fall apart with no money to invest in the overall success of students,” Perles said.

The Out of Alignment study reported that 63.9% of Ulster County school budgets go towards teachers’ salaries and benefits. If there is a lesser need for teachers, then fewer people will become teachers. This poses a possible threat to the pension system.

“No one does this job to make money. One of the most practical reasons to become a teacher is because there is a pension waiting for you at the end,” Perles explained. “If they start telling teachers they have to work longer for their pension, or tell new teachers they will not get a sustainable pension, then the job becomes less appealing.”

With fewer teachers, there is less money to put into the pension system, while the rate of retired teachers taking money out of the system increases.

The New Paltz Central School district has had to make adjustments to its faculty because of decreasing enrollment rates. In their 2017-2018 budget report newsletter, former Superintendent Maria Rice acknowledged staffing adjustments in all four schools to maintain a maximum class size of 23 students.

“No one does this job to make money. One of the most practical reasons to become a teacher is because there is a pension waiting for you at the end.” – Greg Perles

This year’s 2019-2020 school budget report detailed the “reduction” of two Lenape Elementary School teachers because of lower enrollment. Meanwhile, bilingual social workers, guidance counselors, school climate coaches and technology teachers were hired for each of the four schools. This adds an additional $240,000 in faculty salaries to the budget this year.

Arielle Chiger has been a second grade teacher at Duzine Elementary School in New Paltz for 13 years. As she watches her class sizes gradually shrink, she says its impact is hard to notice in predominantly white rural communities like New Paltz.

“The root cause of issues with public education always goes back to racism,” Chiger explained. “In our case, families are moving out of this area because they cannot afford to live here.”

When families and students leave a district to attend private or public schools elsewhere, government funds are depleted from that school district. A poorly funded school directly impacts the quality of education that students are receiving as well as the property values in the community.

From the 2013 to 2017, Ulster County’s per-pupil-cost rate increased 25.1%. Despite this higher cost of education, only 62% of New Paltz High School students were determined “college and career ready” by the New York State Department of Education.

“You want a surplus of teachers to hire the best. If you have a teaching shortage, then you can’t hire the best educators for students because the labor pool is too small,” Perles explained.

In her 23 years of teaching, Chiger has seen an increase in privatized education. In an attempt to gain more teachers, private and charter schools have lowered their requirements to become a teacher compared to public schools. The process of becoming a licensed public school teacher in New York involves rigorous education, training, certifications and testing.

As president of the New Paltz Teachers Union, Chiger said that a main goal across NYSUT is to make sure teachers are highly qualified so public school children will receive a quality education.

“Ultimately, it is really important that public school teachers take a political stance,” Chiger said. “It is incumbent upon educators to lobby at the state or local level.”

On Oct. 17 NYSUT and the New York State Department of Education took the SUNY Charter Schools Institute to court to fight SUNY’s creation of their own teacher certification programs to become a charter school teacher.

The Appellate Division, Third Judicial Department ruled “The Committee exceeded its authority in promulgating the regulations” for teaching qualifications. SUNY is now ordered by the court to require charter teachers to receive the same certifications as public school teachers.

“We need to go to where we can affect the law and the cost of our taxes,” Chiger said.

While lawsuits will not directly stop these predictions from coming true, efforts by NYSUT are holding the state accountable and shedding a light on what decreasing enrollment rates mean for New York state and its educators.

Tue Dec 10 , 2019
Story by Liat Guvenc Edited and Packaged by Bridget Peschel On Sept. 20, Jana Bergere attended the SUNY New Paltz Climate Strike. The corners of her lips turned up into a smile when she looked past the podium to a sea of hundreds of people. A year ago, her heart would […] 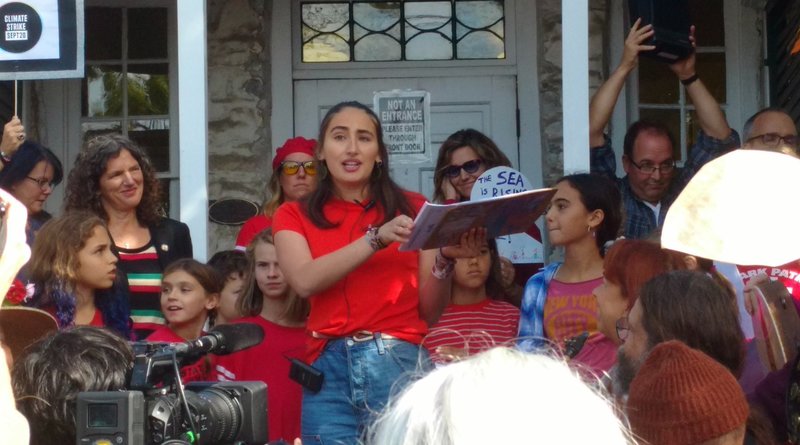