This article first appeared in The New Paltz Oracle. 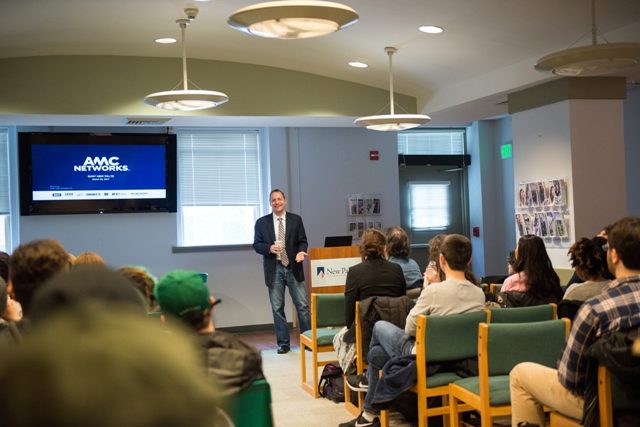 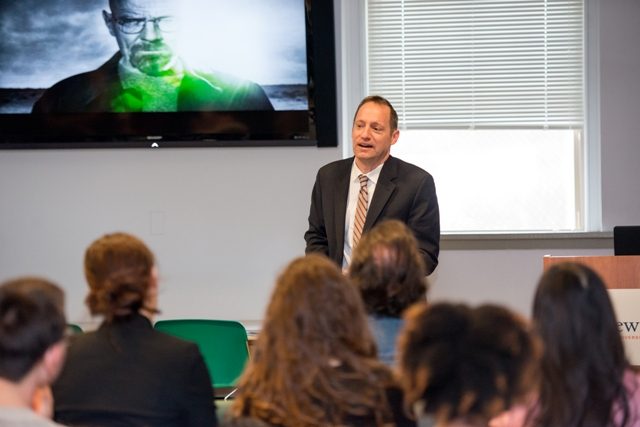 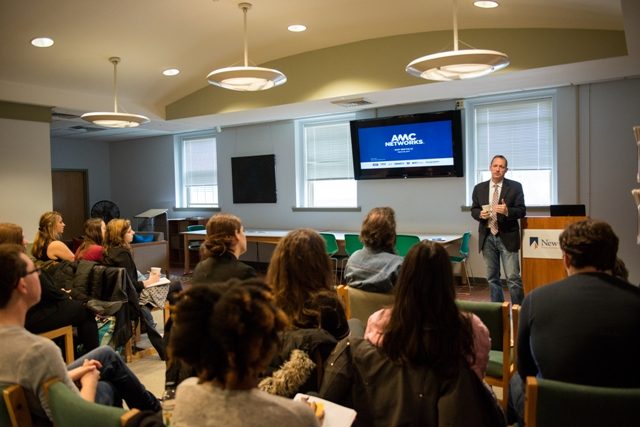 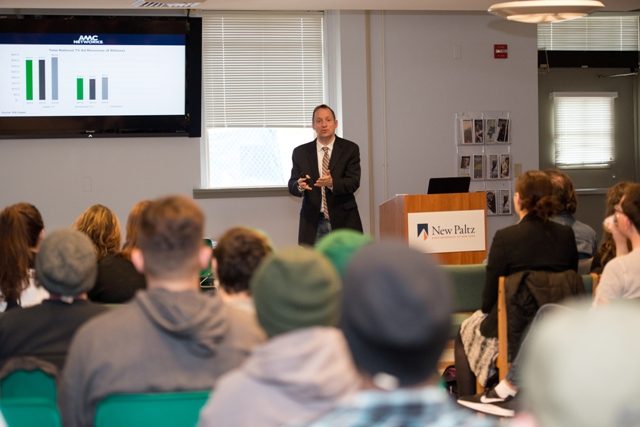 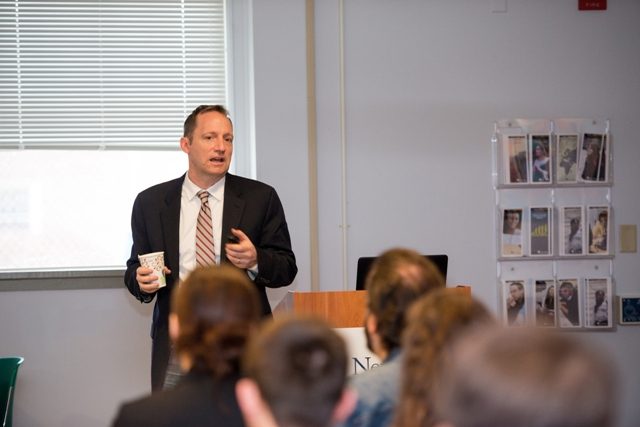 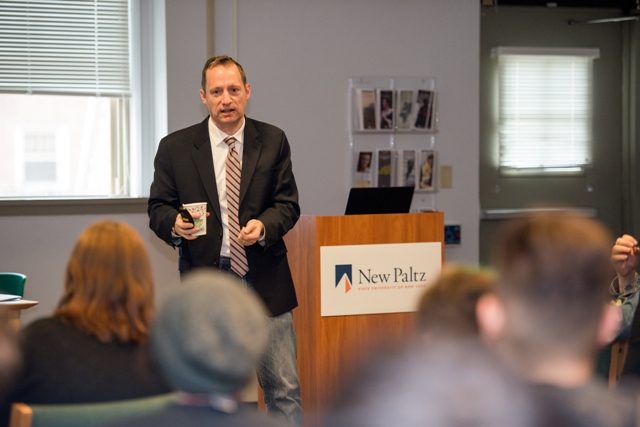 A successful SUNY New Paltz alumnus returned to the college to speak with students about careers in media and its changing landscape.

The Honors Center hosted Chief Operating Officer of AMC Networks, Inc. Ed Carroll on Tuesday, March 28. Carroll graduated in 1985 and since then has spoken several times at SUNY New Paltz, including a talk for the Distinguished Speaker Series in 2014.

“Nowadays it’s a given that grads will have many different jobs and you can’t always tell from the beginning where you’ll end up,” she said. “Students have ideas of what they’ll do based on their majors and need to think more broadly. You really get a sense of that listening to Carroll. He’s a very interesting person.”

We try to make shows with urgency where you don’t want spoilers on social media. Even with a good show, it’s harder to get audiences. –Ed Carroll, COO of AMC Networks, Inc.

Carroll presented for about 30 minutes to nearly 30 students about the transformation of television programming in the digital age. As COO at AMC, Carroll makes decisions about which shows to produce and how to advertise them. This has become increasingly difficult in a time when people stray from watching live cable television in favor of DVR or streaming services.

“Consumers are smart, they’re not going to sit around. They’re going to watch when they want,” he said. “That’s the challenge, so we try to make shows with urgency where you don’t want spoilers on social media. Even with a good show, it’s harder to get audiences.”

According to Carroll, households with cable television have increased to 116 million in 2016 from 95 million in the 1990s. However, streaming services have more influence than ever. He called Netflix, Hulu and Amazon “the CBS, ABC and NBC of digital streaming.”

Facing this pressure head-on, Carroll steered AMC away from airing movies and onto creating original television series. The goal was to make series that would distinguish themselves from the rest, and the results were shows like Mad Men, Breaking Bad and The Walking Dead.

The digital world is now full of young companies trying to find their niche so it’s an exciting time for that but it’s challenging. –Ed Carroll, COO of AMC Networks, Inc.

“My biggest accomplishment was choosing something different with AMC’s first original series, Mad Men, and deciding to worry about audience passion,” he said.

Carroll stressed the importance of focusing on what consumers want to see, and not potential ratings. He also mentioned that AMC sells their shows to Netflix and Hulu to make revenue in the changing television programming environment. This allows viewers to catch up on shows before watching them on air. Carroll reserved the rest of his talk to allow students to ask questions. He offered advice and insights from his own career path. He recounted stories of interning at IBM while he was still in New Paltz and taking up other public relations gigs he didn’t enjoy. Finally he landed a job at Bravo, a startup network at the time, and the rest is history.

“I think you should pursue what you like and you’ll find your way,” he said. “I learned a lot being at a failing network and trying to make it successful by trying a lot of new stuff. It was a good situation to learn. The digital world is now full of young companies trying to find their niche so it’s an exciting time for that but it’s challenging.”

His advice to students was to take internships to get a taste of the business environment. He also suggested researching companies before attending interviews, not being afraid of being wrong and demonstrating curiosity.

Fourth-year double major in sociology and history Brenna Hemmings attended Carroll’s talk and engaged by asking questions and taking notes along the way.

“I came because it seemed interesting and I didn’t get to see him last time he was here,” she said. “It was good to hear about how television is made from someone with so many years in the industry.”

More Students are Plugging in Despite School's Energy Saving Efforts

Tue Apr 18 , 2017
By Alex Acaro An energy reduction competition at SUNY New Paltz has produced mixed results, according to data from the Office of Campus Sustainability. During three-week energy conservation between residence halls, students are in some cases not making an effort at all or are using more energy than in the […] 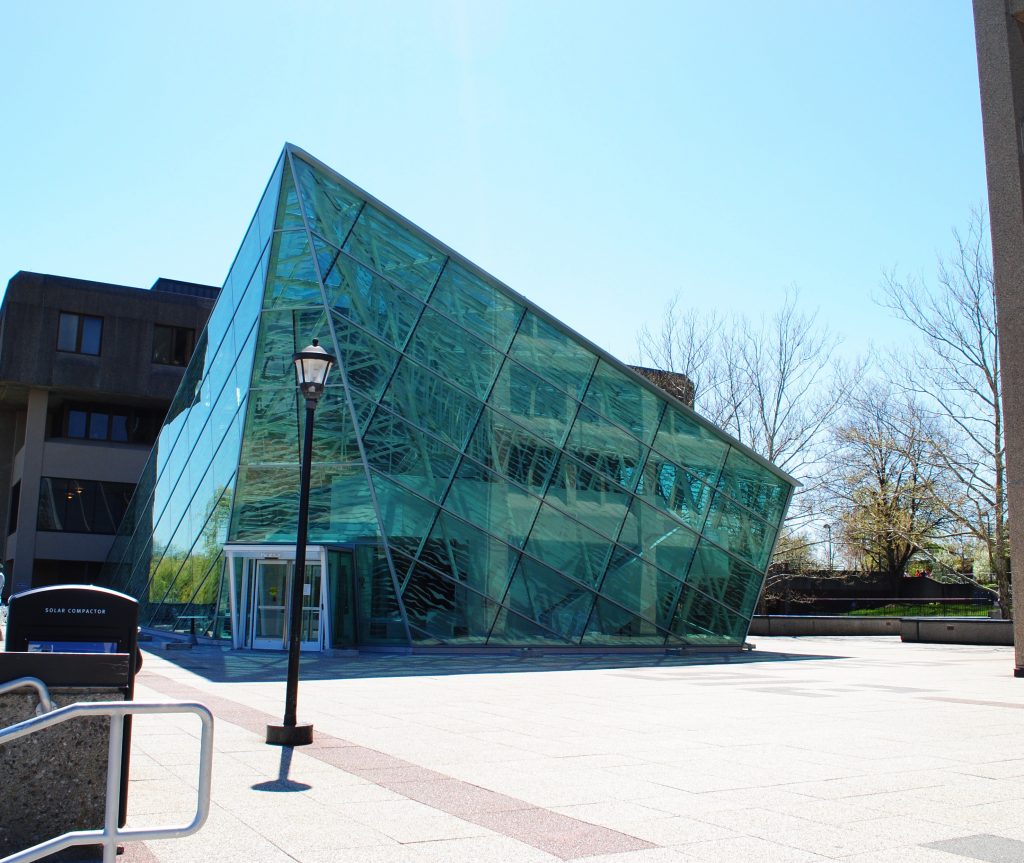