Students of Lisa Phillips’ fall 2015 Literature of Journalism class were asked to interview everyday working people about their jobs, and frame the first-person commentaries in the style of Studs Terkel’s book “Working, People Talk About What They Do All Day and How They Feel About What They Do.” Subjects include an emergency medical technician, a hairdresser, a breastfeeding consultant and a local business owner.

Mahtik Calhoun is a 26-year-old living in Brooklyn. He works for a small company that transports patients to and from dialysis and chemotherapy. He received his Emergency Medical Technician certification in May of 2015 after taking an expedited five-month course. “That kind of scared me in the beginning because like, why would you want to rush this?” (Laughs.) He was inspired to go for EMT certification while working at his previous job as a production assistant for TV and commercials.

“It was basically like the bottom of the barrel. Either I was shuttling actors and actresses around or helping the assistant director with making sure the set ran smoothly – such as running to get stage items, like lights or different types of backdrops. It was freelance, so I didn’t really know when I was going to work. It was $250 a day, but no benefits, no nothing. And it was 12-hour days, which could easily turn into 16-hour days, so then all of a sudden $250 doesn’t seem like that much. (Laughs.)

When I was on set I met a set medic who was also a paramedic and started out as an EMT. I talked to him for a good chunk of that day and by the end he had given me all this information about how to start out, how to become an EMT, what schools were good and accredited by the FDNY. Basically, that’s how I got the idea in my head.

One of the toughest situations so far wasn’t even during work but it’s still in the same realm of things. This woman got run over by a dump truck, and it basically crushed her from her abdomen down to her thighs. I didn’t see it occur, but the time between when it happened to me getting to her was like less than five seconds. I was turning the corner coming out of the gym, and this kid was riding his bike and all of a sudden he just jumped off and started sprinting to the dump truck. I look over and there’s this woman behind the front left tire.

I ran over and she was pretty much on her last couple breaths. Her internal organs were on the outside, and she was bleeding bright red blood, which usually means an artery was severed.

All of a sudden I heard her do this gasping sound. That’s usually what they call an agonal gasp, which is your body’s last attempt to try and get some oxygen into itself before it just completely shuts down. I checked her pulse. She didn’t have one. I started compressions, and by this time everyone’s flipping out and going crazy. They wanted to rip the driver out of the truck and kill him.

She died right there.

I was feeling shitty about it because I was like ‘Should I have done this better? Did I do that quick enough?’ But I talked to some buddies of mine in the FDNY, and they were like ‘Listen, that’s a traumatic arrest. Most people don’t come back from that – they bleed out so quickly that their heart can’t keep up with anything.’

I remember coming home and talking to my mom on the phone. I started crying because I really felt like the lady died because I didn’t do the right shit or because I didn’t do stuff fast enough. I don’t think I’d cried since I was a kid. And this was the first time I was so scared. This was an hour after, and I was still shaking from it.

I remember how her face looked. Her mouth was wide open, and her eyes were just staring into nothing. I saw her pupils dilate. And I remember her perfume. Every time I smell it, I just automatically start thinking of her. It’s so weird.

She was in her 80s. The thing that sucks is she was a block away from her house. And what’s even worse is her aid who was helping her cross the street was on her fucking phone, not paying any attention and started leading her into the street on a green light.

The suicide rate in EMS is pretty high. That shit does stick with you. Some of these guys are too proud and their ego will not let them talk to people about it because they think it’ll make them seem weak, which is not the case at all. Especially now that PTSD has been looked into more and it’s more accepted now, with all these guys coming back from Iraq and Afghanistan. Now that it’s being paid attention to during the worst possible case, which is during a war time, they’re starting to see that it’s also happening in EMS, and it’s happening a lot more than expected.

I hate to even compare it to guys in Iraq because they deal with so much crazy shit on a daily basis and those are their buddies they’re seeing getting blown up, so it’s obviously a lot harder for them. But here, even though it’s not your buddies, you’re still seeing innocent people with limbs gone, heads cut off. Those images stay with you for the rest of your life.

I always use the woman that got hit as my reason ‘why.’ That’s the only thing that has happened to me so far to that extent, but I know I can handle my shit now. She passed away, it was a traumatic arrest, but I know that I can get to a patient who’s completely fucked up and I’ll be able to do the shit that needs to be done. I’m still kind of worried about the inevitable – a pediatric emergency. But once again, I’ll be able to do it. I know I will. And I’ll just deal with the shit later on, I guess.”

In October 2015, she reported on Halloween events in New Paltz, as well as how to make your own candy corn!: Celebrate Halloween in New Paltz!

Visit the other profiles in the Work series:

In At Work: Serina Bass Constructs Hairstyles with Panache, Jack O’Brien spoke with hairdresser Serina Bass about fulfilling her lifelong career dream and her day-to-day experiences with her clientele.

In At Work: Isabella Chisena Curates an Enchanting Collection, Catherine Rubino spoke with shop owner Isabella Chisena about her family’s entrepreneurial background, as well as her journey from selling jewelry at flea markets to owning her own store.

My name is Caitlin Marinaccio. I live in Beacon, New York and I'm graduating from SUNY New Paltz in December 2015. I love manatees and jigsaw puzzles! 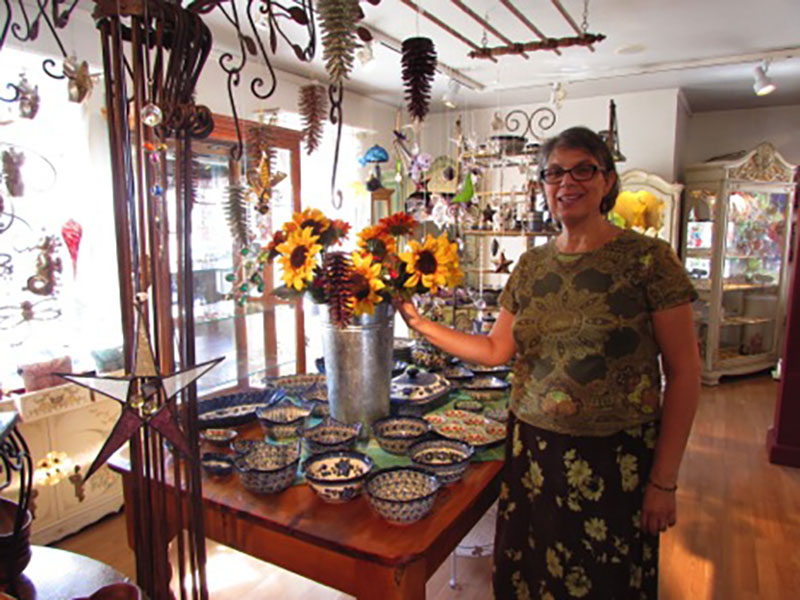