Skip to content
Students of Lisa Phillips’ fall 2015 Literature of Journalism class were asked to interview everyday working people about their jobs, and frame the first-person commentaries in the style of Studs Terkel’s book “Working, People Talk About What They Do All Day and How They Feel About What They Do.” Subjects include an emergency medical technician, a hairdresser, a breastfeeding consultant and a local business owner.

At the end of my freshman year of college, a true act of serendipity occurred. I walked into Isabella’s Treasures, a whimsical gift shop in New Paltz that sells detailed porcelain plates, glassware, jewelry and fabric pouches. After talking with the owner, Isabella Chisena, I discovered that she came to America from San Marino – the same small Italian country my mother’s family comes from. It’s okay if you’ve never heard of San Marino, most people haven’t. Our beautiful history and geography is lost in most textbooks. Upon the start of my senior year, I returned to Isabella’s Treasures as the mid-day sun shone through the windows, illuminating her intricate ornaments. Then, Isabella told me her story:

“I hope that when people enter my stores they’re kind of leaving reality behind and they feel a little bit of the magic. I always say it’s an enchanted collection. It’s funny, somebody came in like, ‘Do you have a plain pair of earrings?’ I said, ‘We don’t do plain.’ We just don’t. In Italy, everything is touched with detail. The culture of Italy is totally intertwined in who I am. It’s not a far-away place. I think also physically being present in Europe has influenced the way I do things and even how I look at things: how I display, and what I buy. But the American part of me is very present as well.

My parents had the American dream. Back in the day, everybody thought the streets were paved with gold and opportunity. They moved to the Bronx because there were other people from San Marino there. You went to a safe haven in a sense. I think just being surrounded by a hard working family and seeing them manifest their dreams helped me or inspired me somehow. I was always surrounded with people who created opportunities for themselves.

My mom is kind of an entrepreneur person. She worked for Faberge, which was a perfume company. Then there was a factory of Italian women in the South Bronx and they would glue fabric caps, so it was like manufacturing work. Later, she was a great seamstress, so she sewed a lot. I remember her getting a job where it was like a cottage industry. They would work at home and make little, square pouches you pull and put jewelry in. They would bring jewelry home and put them on cards. Literally, that’s what they did all day.

I spent a lot of my summers in Italy. I got shipped off with my grandmother, which I loved. They’re my happiest memories. My grandfather in Serravalle owned a major furniture store. I would be 8 or 9 years old wandering all by myself and having imaginary customers. I would design their homes. I would write notes of what they were buying and I’d end up on the top floor where all the chandeliers were. We would pick out chandeliers for every room. I was always into creating spaces. I loved that part of it.

I went to college at Albany State. I was a great student you might say. I could have easily been a teacher. But I also became very rebellious and open-minded. Even though I may have been good at it, it wasn’t where my passions lied. I guess I just didn’t want to be caught in a situation where I spent my precious time in a place I didn’t want to be in or do anything that wasn’t following my passions. So, I started kind of searching out what it is that I loved.

For our first-year anniversary, my husband had made a little crystal bracelet for me, and he had figured out how to close it. There’s a little physics to jewelry.  I looked at him like, ‘You can do this?’ And I said, ‘Oh, we’re going into business!’ So, we would be staying up until 3 a.m. making jewelry. We would do that every night. I was 24 and my husband was 20 and we had a 3-month-old baby. What do you do for entertainment? You don’t go out to the bars, so we would hang out and make jewelry. I became really passionate about it and wanted to turn it into a business.

So, we started doing little flea markets. This was all a learning experience for me. It wasn’t something I learned in college. We did our first flea market and we made 200 earrings and they were sold for $5 each. I only sold one pair. I didn’t become discouraged. I said, ‘What am I doing wrong?’ I looked at them and realized that it’s because they were ugly. We were using plastic beads and finding any crap. We didn’t know. I ended up doing a flea market with a woman who taught me where to find sources. She guided me as to where I could get the materials and that’s how it flourished.

I feel like the universe is always presenting opportunities and you are the one who can decide whether you want to or not. So we moved away from the city because we wanted to get out. After going to Albany State and realizing there is all of upstate New York and how beautiful it is up here, that’s where I knew I wanted to spend my life. So, we overcame the fear because everybody puts the fear of God in you that you’re never going to do it. I’m also a stubborn ass so I said, ‘Watch me!’ You can’t make failure an option. You just do it and that’s that. It’s like those 200 earrings that I only sold one, but I sold one! And that’s where I knew there was an opportunity here.

If you’re going to open up a store, be open and be patient. Don’t give up. You have to do something that you’re passionate about and just do it. Don’t always rely on somebody else creating the opportunity for you. You create your own opportunity.”

Visit the other profiles in the series:

In At Work: Serina Bass Constructs Hairstyles with Panache, Jack O’Brien spoke with hairdresser Serina Bass about fulfilling her lifelong career dream and her day-to-day experiences with her clientele.

In At Work: Mahtik Calhoun, Emergency Medical Technician, Caitlin Marinaccio spoke with EMT Mahtik Calhoun about a particularly gruesome situation that will stick with him forever. 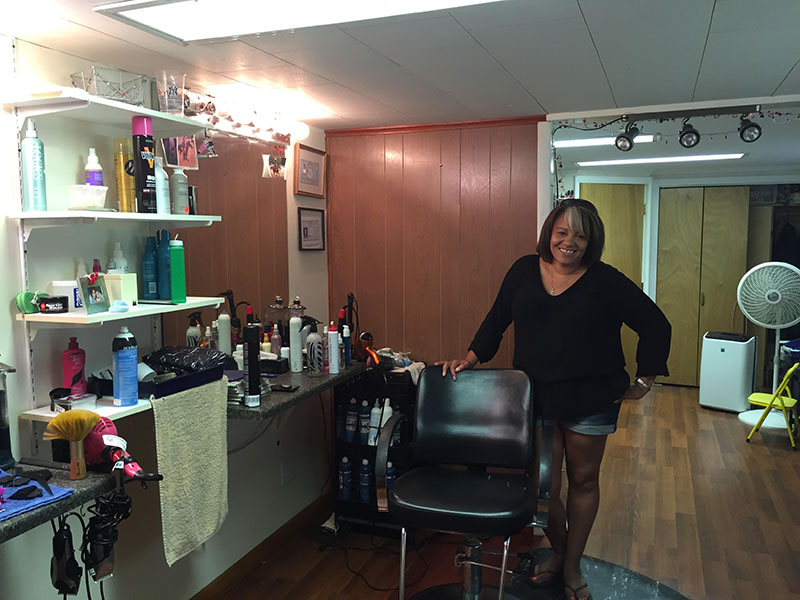